BREAKING NEWS: Kirk Ferentz Has Something in His Eye

Share All sharing options for: BREAKING NEWS: Kirk Ferentz Has Something in His Eye 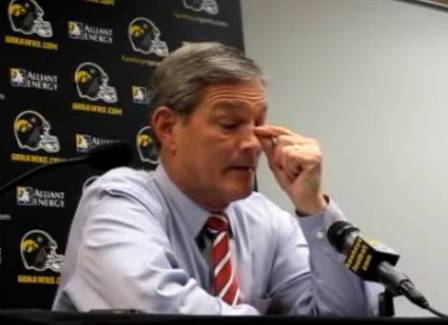 Breaking news out of Iowa City yesterday: At his weekly press conference ahead of Saturday's all-important game with Michigan State, Kirk Ferentz admitted to reporters that he has something in his eye.  "I've been trying to just focus on what we're doing here and this week's game and getting through the weekend.  That's where my sights have been," said Ferentz.  "Except I can't see shit because there's something in my eye."

Ferentz, the twelve-year veteran head coach at Iowa, refused to elaborate on the cause of his problem.  "At this point, I wouldn't want to speculate.  We'll just keep working, grinding, blinking.  It's really all about execution."  Ferentz did say the problem began earlier that morning.  "Well, that eye missed a lot of practice earlier today when I was sleeping, and I think it just didn't get enough work.  Everything starts at practice, I believe that, and so when you don't practice, you occasionally don't work at one hundred percent."

Ferentz denied his eye problem would make preparing for this week difficult, but he had a difficult time disguising his annoyance.  When asked about his offensive gameplan, Ferentz said, "I feel like we need to be balanced.  We are really a balancing act, and we work best when we're balanced.  I think we're making some strides, and we're getting more balanced.  We need to be balanced.  Being balanced is a good thing.  Can we get an optometrist or someone in here, because this thing is fucking killing me."  Ferentz then tried to karate chop the debris out of his eye.  He was unsuccessful, and blamed that failure on "social networks", saying, "Norm told me he got that from WebMD.  I think he was making it up."

University of Iowa sports information director Phil Haddy has scheduled a press conference today to discuss Ferentz's condition.  Speaking at the press conference will be senior trainer Doug West, a local optometrist who did not treat Kirk Ferentz, and Biff Poggi.  Ferentz will not be available, as "his eye is all pink and gummy and shit."  More news as this story develops.