Share All sharing options for: Marcus Coker Takes Time Away From Being Awesome At Football To Discuss Asteroids

Did you know that a really big asteroid is slated to make a really close pass by Earth?  So what would happen if that asteroid hit Earth?

If the asteroid were to crash into Earth, it could cause a 4,000 megaton blast and a magnitude 7.0 earthquake, according to scientists at Purdue University. If it fell into the ocean, it could cause a 70-foot high tsunami within 60 miles of the crash site, the experts said.

Purdue University?  That sounds like something those doomsaying jerkfaces would say at a time like this.  So is this something we should be worried about?  In times like this we could ask NASA, but why bother?  We can just turn to the astrophysics major on the football team:

WHEW.  Solid work, Marcus.  But what if you're wrong?  Then what will we do? 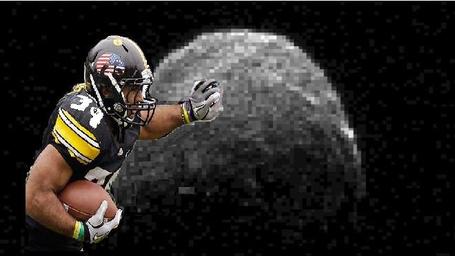 BOOM!  Stiffarm!  Take that, you big dumb asteroid!  Becoming the Big Ten's top rusher, defending the Earth from rogue asteroids... is there anything Marcus Coker can't do?