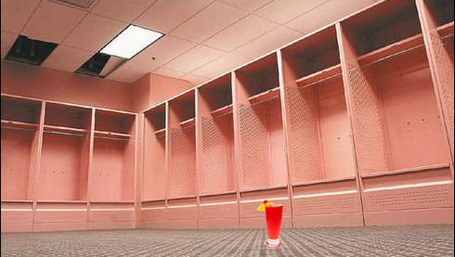 [Editor's note: The following hand-written account of the Michigan post game was found by a BHGP source in the Kinnick Stadium visitor's locker room Sunday morning. It was signed "J. Hemingway, Wide Receiver", and it is not clear if it is a work of fiction or not. We present it without alteration.]

It was very late and everyone had left the pink locker room except a head coach who sat in the shadow Denard Robinson's hair extensions made against the electric light. In the day time the stadium was loud, but at night the fans had left and the head coach liked to sit late because he was a coach and now at night it was quiet and he felt the difference. The two assistant coaches left inside the locker room knew that the head coachwas a little drunk, and while he was a good head coach they knew that if he became too drunk he would leave without talking to the media, so they kept watch on him.

"Last week he said he thought Michigan football had turned the corner," one assistant coach said.

"The poll said he should."

They sat together at a table that was close against the wall near the door and looked at the pink locker room where the benches were all empty except where the head coach sat in the shadow of the hair extensions of Denard Robinson that moved slightly in the ventilated air. A golden girl and a man in a hawk suit went by in the hallway. The light shone on the shiny plastic head of the hawk suit. The girl wore no head covering and hurried beside him, twirling a baton and sometimes catching it.

"The SID will come get him," one waiter said.

"What does it matter if Michigan football turns the corner?"

"He had better get off that bench now. The SID will get him. He went by five minutes ago."

The head coach sitting on the bench rapped on a locker with his coaching whistle. The younger assistant coach went over to him.

The head coach looked at him. "Another Singapore Sling," he said.

"He'll stay all night," he said to his colleague. "I'm sleepy now. I never get into bed before three o'clock. He shouldn't have looked at those polls last week."

The assistant got out the special gym bag and removed a blender, a bottle of gin, and travel-sized bottles of cherry liqueur, Cointreau, Benedictine, Grenadine, pineapple juice, lemon juice and bitters, then he went over to the head coach's bench. He put down the blender and began to mix the ingredients.

"You shouldn't have looked at the polls last week," he said to the coach but the coach couldn't hear him over the blender. The head coach motioned with his finger. "Where ... where's the garnish?" he said. The assistant coach reached into the special bag and found the jar of Maraschino cherries he kept for garnish. "Thank you," the head coach said. The assistant coach took the special bag back to the other side of the locker room. He sat down at the bench with his colleague again.

"Why did he look at the polls?"

"How should I know."

"How high did they say he was?"

"What will they say now?"

"Why did he believe it?"

"The fans, they wanted him to believe it."

"How much did they beat Minnesota by?"

"Must have been sixty points."

"Anyway I should say it was around sixty."

"I wish he would go home. I never get to bed before three o'clock.What kind of hour is that to go to bed?"

"He stays up because he likes novelty drinks."

"He has a degree in physical education too."

"A degree in physical education would be no good to him now."

"You can't tell. He might be better with little kids."

"A big guy like that? No, he would scare the little kids."

"He's not that big. He's just got an enormous head. Most of his weight is in his head I would say."

"I don't want to look at him. I wish he would go home. He has no regard for those who must work."

The head coach looked from his glass across the locker room, then over at the assistant coaches.

"Another Singapore Sling," he said, pointing to his glass. The assistant coach who was in a hurry came over.

"Finished," he said, speaking with that omission of syntax football coaches employ when talking to drunken people or reporters. "No more tonight. Close now."

"Another," said the head coach.

"No. Finished." The assistant coach wiped the edge of the bench with a towel and shook his head.

The head coach stood up, slowly counted the eighteen Singapore Sling glasses on the bench beside him, took a notepad from his pocket, wrote something down, and left it on the bench.

The assistant coach watched him go down the hall to the press briefing, a head coach walking unsteadily, as the air from the ventilation system was throwing off the balance of his enormous, pumpkin-like cranium, but with dignity. He picked up the note and read it. It said:

"Why didn't you let him stay and drink?" the assistant coach asked. They were packing up the Singapore Sling bag. "He might have forgotten about writing that note."

"I want to get out of this pink locker room."

"What's so bad about pink?"

"It's the color of a Singapore Sling."

"Not if you make it right. Not if you use eight parts cherry liqueur like you should."

"You talk like the coach. He can buy the ready-made mix and make Singapore Slings at home."

"No, it is not," agreed the assistant coach with the degree in physical education. He did not wish to be unjust. He was only in a hurry.

"And you? You aren't worried about the polls? It was your offense that couldn't score on four straight tries."

"Are you trying to insult me?"

"No, hombre, just your offense"

"No," the assistant coach who was in a hurry said, rising from stowing the last of the eight Singapore Sling ingredient bottles. "I have confidence. I am all confidence. Did you see the number of long bombs I had Denard throw today?"

"You have youth, confidence, and a running quarterback," the defensive assistant coach said."You have everything."

"You have everything I have."

"Come on. Stop talking nonsense and get on the bus."

"I am of those who like to stay late in the locker room," the defensive assistant coach said.

"We are of two different kinds," the defensive assistant coach said. "It is not only a question of a running quarterback and confidence although those things are very beautiful. Each game I am reluctant to close up the locker room because there may be some one who needs it."

"Hombre, literally the entire team is on the bus."

"You do not understand. This is a clean and pleasant locker room. It is well lighted. It is pink. The light is very good and also, now, there are the shadows of the hair extensions."

"Good night," the other said. Turning off the electric light he continued the conversation with himself, It was the light of course but it is necessary that the place be clean and pleasant. And pink. You do not want music. Certainly you do not want music, unless it is AC/DC or Metallica blasted at 100 dBs. Or that "Pump It Up" song. That's good too. Nor can you stand in a pink locker room with dignity although that is all that is provided for these hours. What did he fear? It was not a fear or dread, It was a nothing that he knew too well. It was all a nothing and his rush defense was a nothing too. It was only that and light was all it needed and a certain cleanness and order. And pinkness. Some lived in it and never felt it but he knew it all was Coker y pues Coker y Coker y pues Coker. Our Coker who art in Coker, Coker be thy name thy kingdom Coker thy will be Coker in Coker as it is in Coker. Give us this Coker our daily Coker and Coker us our Coker as we Coker our Cokers and Coker us not into Coker but deliver us from Coker; pues Coker. Hail Marcus full of Marcus, Marcus is with thee. He smiled and stood before the bench with the Singapore Sling blender on it.

"What's yours?" asked Ferentz, who had walked by and was wondering when the Michigan defensive coordinator was going to pick up his blender and get out of his damn locker room.

"Um, no. He's on my team." said Ferentz and turned away, muttering "you crazy bastard" under his breath.

"Would you... would you make me a Singapore Sling?" said the defensive coach.

Ferentz looked at him with a blank expression, then said "I'm not an assistant coach. I don't mix exotic cocktails anymore."

"The light is very bright and pleasant but the lockers smell like Axe Body Spray," the defensive coach said.

"Yes. I have film to watch," said the defensive coach and went out. He disliked film rooms and team buses. A clean, well-lighted, and most importantly, pink locker room was a very different thing. Now, without thinking further, he would go home to Ann Arbor. He would sit in the bus and finally, when they crossed into Indiana, he would go to sleep. After all, he said to himself, it's probably only Coker. Many must have problems stopping him.