Breaking news this morning from Iowa City: According to sources close to the Iowa football program, head coach Kirk Ferentz spent most of the first three quarters of Friday's game against Nebraska "Tebowing".  Those same sources have confirmed he was ultimately unsuccessful.

"Tebowing" is the colloquial nickname given to taking a knee and placing a hand to the forehead, made popular by Denver Broncos starting quarterback Tim Tebow.  It has rapidly grown into a national phenomenon, with people across the country taking every opportunity possible to do some Tebowing.  Apparently, Kirk Ferentz is not immune to the popular fad.  Multiple sources have confirmed that this conversation took place between Ferentz, offensive coordinator Ken O'Keefe, and wide receivers coach Erik Campbell in the second quarter of Iowa's game with Nebraska:

They're using Denard underneath with a safety over the top on every play.

We're not going to be able to get him open deep if they keep doing that.

Hey guys!  Check it out. 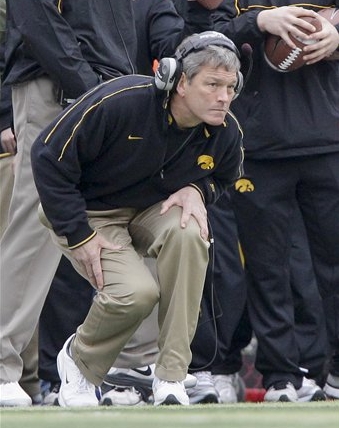 What is that, Coach?

Ferentz reportedly attempted Tebowing multiple times in the second and third quarters.  None of those attempts were successful.  On the first attempt, Ferentz was unable to get to one knee.  The second time, he extended his fist rather than placing it to his forehead.  Next, he accidentally placed his fist to strength coach Chris Doyle's forehead, leading to a confrontation between the two longtime coaches.  On his final attempt, Ferentz forgot to make a fist, transforming the Tebowing attempt into a kneeling facepalm that more effectively summarized Iowa's offensive performance than any words could.

There was also an unfortunate scene during Ferentz's halftime speech.  Ferentz told his players to take a knee.  They did so, expecting their head coach to impart some wisdom or at least change the gameplan so that they might score a touchdown.  "Now put your elbow on your knee and raise your fist to your forehead," Ferentz said.  His players, ever loyal, obliged.  Ferentz exploded with joy: "MOST TEBOWINGS EVER, YOU GUYS!  SOMEONE CALL GUINNESS BOOK OF WORLD RECORDS!"

After Iowa scored its only touchdown of the afternoon, Ferentz again struck the first pose.  "Are you Tebowing again, Coach?" Ken O'Keefe asked.  "Nope," said Ferentz.  "I'm running like that QWOP guy.  Man, that game is so tough to play!"