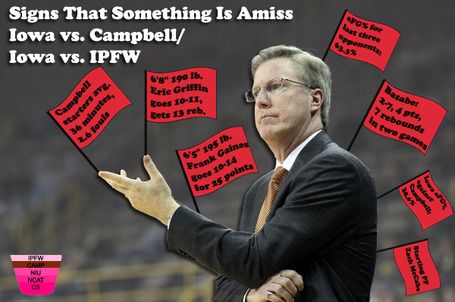 I managed to see both these games, Iowa's 77-61 defeat to the Campbell Fighting Camels and their apparently comfortable 82-72 win over the IPFW (International Pipe-Fitters Workers Local #852) Mastodons*, and neither game did much to reassure nervous Hawk fans after their crushing defeat to Creighton. The first game, a straight-up beat-down by one of the supposedly easy marks on the schedule, was bad enough, but the second game, where Iowa was locked in a death-match to the very end (they were up just four points with 2:22 left) with a pretty mediocre-looking Mastodon squad, was equally worrisome.

The biggest story coming out of both games is that Iowa is apparently incapable of defending. We all chalked up Doug McDermott's excellent performance to him being a burgeoning superstar, but in both subsequent games, lesser-known players have torched Iowa just as badly: Campbell's Eric Griffin looked like Kevin Garnett against Iowa, scoring with ease at the rim on his way to a 10-11, 23 point game, and IPFW's Frank Gaines went off for 25 points on 10-14 shooting and 3-4 shooting from three. And despite the Moses Malone shooting lines, neither of these guys was all that big. Griffin is 6'8", has long arms and can jump, but weighs only 190 pounds, and Gaines looked like your standard 6'4" shooting guard. Griffin's performance can at least be written off as the result of Iowa's lack of interior defense, but Gaines, who was marked by Iowa's best defenders throughout the game (usually Matt Gatens or Devyn Marble), is more mystifying. More than any individual performance, though, the overall defensive numbers have been just generally bad: all of Iowa's last three opponents have topped 60% in effective field goal percentage, a version of field goal percentage that weighs three-pointers properly. An average number would be around 48%. I don't know exactly what the problem is. Iowa is obviously lacking interior heft, and certain defenders are less effective than others (*cough* Basabe *cough*), but it seems like the Hawks are getting beat at the basics: switching, getting out on shooters, then putting a body on rebounders and preventing the offensive board.

The other big story, obviously, is Melsahn Basabe. The Campbell and IPFW games actually provided interesting test cases for Fran's thinking about the sophomore, because both were tight games in the second half where Iowa was trying to win and the coach had to decide what his best line-up was to either come back or close out the game. In both games, Basabe wasn't part of that group. The proximate cause seems to be defense, or lack thereof; whereas last year Basabe provided iffy positioning but at least reliable shot-blocking and rebounding, this year the positioning is still poor, but Melsahn seems to have completely lost the bounce that made him such an effective shot-blocker and rebounder last year. He has two blocks through six games and is averaging only 4.5 rebounds a game. The ultimate cause of his benching down the stretch, though, is a complete evaporation of offensive production. His field goal percentage is down to 43% from 57% last year, and the drop has a lot to do with where he is getting the ball. Whereas last year he usually got the ball down low and scored on a variety of funky odd-angle shots, now he's getting the ball on the wing, 10-15 feet from the basket. In those situations, he either takes a bad jumper, or tries to work his post moves and winds up with a much longer shot than he's used to in those situations. Coach McCaffery mentioned in a post-game interview that possibly the extra weight Basabe had put on (the mythical "15 pounds of muscle" every basketball player manages to find lying around in the off-season) might have made him sluggish, and it certainly looks like something has physically changed: Melsahn seems distinctly earth-bound this season, and it frustrates a lot of what he does so successfully on offense and defense. Against IPFW, Fran went with Zach McCabe down the stretch at power forward, and I can't blame him. At this point, McCabe offers a much more versatile offensive game, and similar if not superior defense. And when Basabe's defense can't match up to the fairly slow-footed, earth-bound D of Zach McCabe, then you know something is very wrong.

One last gloomy thought. Beyond the poor defense and the decline of an expected star, Iowa's offense looks utterly confused. The most damning thing you can say about it right now is that the vast majority of success seems to happen through players free-lancing largely by themselves off the dribble. Devyn Marble provided several key baskets this way in the second half against IPFW, and Matt Gatens is really saving the team with his efforts driving and getting to the line. But there seems to be no sense of "offense" in a formal sense. There's very little pick-and-roll, even though Bryce Cartwright excelled at it last year, and only haphazard efforts at screening and movement. My general impression is that the Hawks look like a group of guys who just got together on the pick-up courts and are trying to do general offense-like things but have no definite plan from possession to possession. I'm far from an expert, so take that impression with a grain of salt, but one thing that's indisputable is that Iowa has been unable to break 43% in effective shooting percentage in two of their last three games (Creighton and Cambpell). I'm as big a Fran fan as anyone, but the Hawks do not look like a well-coached team right now. Either that or some kind of virus has struck the entire team simultaneously and left them sluggish and uncoordinated.

I hate to end on such a depressing note, and there is certainly the possibility that Iowa just happened to catch two teams in a row that happen to be far better than their initial rankings would indicate. There is also the hopeful note that Andrew Brommer's minutes jumped up to 21 minutes against IPFW, and he should help on the defense and rebounding front as his knee improves. But at the moment there are several red flags with the Iowa basketball team, and they all need to be addressed before Iowa can hope to compete with actual Big Ten-level competition.