At yesterday's press conference, Kirk Ferentz announced that exquisitely-named backup halfback Mika'il McCall has violated team rules and will not be traveling to Lincoln for this week's game against Nebraska:

Q. Can you elaborate on McCall?

COACH FERENTZ: He won't be with us. Violated team policy.

Q. Was it something after Purdue, after the game?

COACH FERENTZ: I think the fact he's not going this week, it's probably safe to assume that, yeah, something I learned afterwards, so...

Q. Just a one-week deal with him?

COACH FERENTZ: Haven't made that decision yet. We'll just take it a week at a time right now. I'm just trying to get through Friday. That's where I'm at.

It was a bit of a stunner; after breaking his ankle in the opener against Tennessee Tech, McCall had been left for redshirt this season, only to return far ahead of schedule.  He'd been active for more than two weeks before Ferentz put him on the field in the second quarter of last week's game at Purdue.  He then almost immediately fumbled the ball over to the Boilermakers.  Ferentz's language in the press conference -- "something I learned about" after Purdue, rather than something that happened after Purdue -- was also intriguing.

The assembled wannabe journalist media immediately went to work, scouring the internet for any evidence of what McCall did to deserve this suspension.  Rumors swirled of a party at Hillcrest dormitory Sunday (certainly plausible given that Thanksgiving break started Friday), or that the suspension was actually for the Purdue fumble itself.  Finally, late last night, we found the most likely culprit: A long-since deleted Facebook post by McCall immediately following the Michigan game: 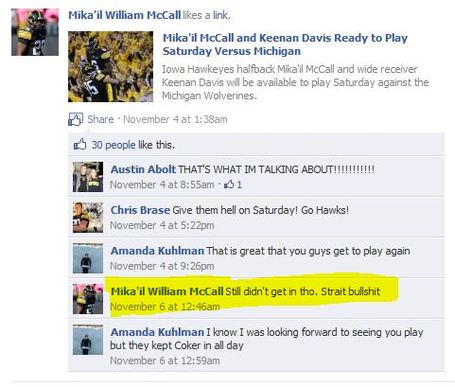 That's Mika'il McCall "liking" a BHGP post from immediately before the Michigan game after Ferentz announced he was ready to play.  He then hopped on Facebook Saturday night to voice his displeasure over not actually playing in the game.  Some might say that this comment regarding Ferentz's decision to keep McCall on the bench ("strait bullshit" indeed, Mika'il) might be the violation of team rules.

We think it's something else.

You wanted to see me, Coach?

What can I do for you, Coach Ferentz?

You can explain this to me.

I can't believe you'd be this irresponsible, Mika'il.

You got the copy of the team rulebook, right?

And you've read it?

Of course, Coach.  It was longer than the playbook, but I read it anyway.

And so you know this is a blatant violation of the rules, right?

Yeah, Coach.  I'm sorry.  I shouldn't have been critical of you on Facebo...

I never would have thought you were a BHGP reader, Mika'il.

Maybe Hawkeye Nation or Hawkeye Insider.  At least those guys have press passes.  But BHGP?

I'm sorry, Coach.  You're mad about that being a BHGP link?

Of course I am.  They said I pooped out a fully functional headset last week.  Completely untrue.

You're not angry about me calling your decision bullshit?

Not at all.  It was bullshit.  You should have played in that game.

But rule 14.6 in the Iowa Hawkeye Rulebook specifically states that BHGP is prohibited, and I can't let you get away with just a warning for such a public violation of that rule.  One game suspension, and Mik'ail?  I won't say it again: NO BHGP.

Now, if you'll excuse me, I need to say something completely ridiculous -- like Ken O'Keefe shouldn't be recruiting -- and see if Pat Harty will print it.