Share All sharing options for: BREAKING NEWS: Andrew Brommer Is Really Hung Over 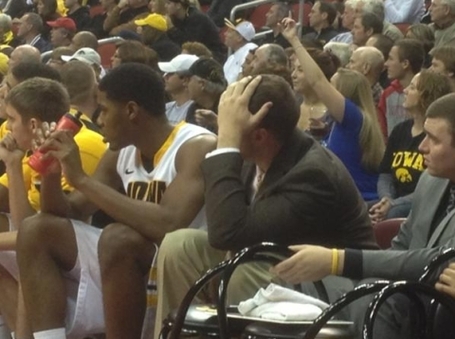 In a postgame press conference following their embarrassing loss to Creighton, Iowa players provided a plethora of reasons for their lackluster performance.  Sophomore power forward Melsahn Basabe blamed the loss on foul trouble.  Senior guard Matt Gatens said the team had trouble guarding Creighton's three-point shooters on the perimeter.  And junior center Andrew Brommer, who missed the game, added his observations.  "Echinique had a great game on the inside, and we didn't have an answer for his agility in the post.  Also, it probably didn't help that I was really hung over."

Brommer missed the first month of practice with a sprained knee, only to reinjure the knee on his return last week.  He's spent the time off, as he said, "partying like a rock star."  As Brommer said, "I'm sure my team could have used me today, and of course I'd play if my knee allowed.  It's just that...can we get these lights turned down?  It's really bright in here."  Brommer later added, "Man, my head is fucking killing me."

Iowa was sluggish in the 23-point loss, attributed by many to a Sunday afternoon game during a holiday weekend.  Brommer, though, provided an alternate explanation, at least for his own sluggishness.  "Whiskey," he said.  "Whiskey was a bad choice."  Brommer reportedly told coaches of his horrible hangover, at which point things got only worse for the backup center.  "Rusty Burney lined up eight shots of Jack Daniels and made me drink them in ten minutes.  He said he saw it on The Cosby Show."

Brommer added, "What the hell is a Cosby Show?"

Iowa coach Fran McCaffery indicated Brommer would be back after the Thanksgiving holiday.  Brommer wasn't so sure.  "Cody bought another pony keg for this week.  We are sooooo gonna party!" he added.  The junior center then hunched over a nearby sink and moaned "Oh God" repeatedly for the remainder of the press conference.