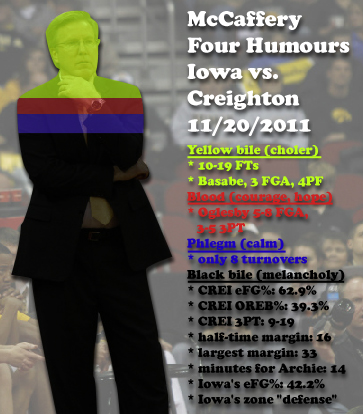 After a diet of what was, in basketball terms, pure confectioner's sugar, Iowa finally took on a real team yesterday, and the results weren't pretty. Creighton won by 23 but led by as many as 33 and it felt like they could have by 40 if they had really put their foot on the gas. Doug McDermott scored 25 points on just 15 field goal attempts (and in 28 minutes of playing time), guard Avery Dingman was even more efficient, with 14 points on just five shots, and three Bluejays had eight or more rebounds. Beyond the numbers, though, Iowa looked totally unprepared to deal with Creighton on either side of the ball, struggling to take contested on offense and allowing numerous wide open looks from deep on defense.

The question I had, and which I attempted to reflect in the chart above, is: to what extent were these problems the one-time result of a bad match-up/bad shooting day for us/hot shooting day for them and to what extent do they represent more or less structural problems with the team?  That is, are these fixable problems, worthy of Fran's yellow bile and formidable choleric humours, or permanent problems, where the only response is melancholy?

On the side of fixable problems, there were a few things that should turn around for the Hawkeyes. Free throw shooting, for one, will probably not always be as  bad as it was in this game. The team went 10-19, Aaron White made just 3-6 free throws, Melsahn Basabe and Zach McCabe went 0-2, and Josh Oglesby went 1-2. On the other hand, Creighton only made 9-13 of their own free throws, Devon Archie miraculously made both of his attempts (which probably won't happen all that often), and Iowa as a team shot only 67.6% last year with most of the same players. And in the end, even Iowa making all their free throws and Creighton missing all their free throws wouldn't have delivered a win.

Another fixable problem (I hope) is the fact that Basabe wound up with fewer shots than fouls. The fouls are somewhat avoidable, but the lack of shooting or even smooth integration in the offense from Basabe is something that must improve if the Hawks are to establish a reliable offense. In the end, this may come down to, paradoxically, getting the ball out of Melsahn's hands more quickly. Right now, he still seems flummoxed by the threat of a double team, and Creighton sent him a steady diet of doubles throughout the game. It's actually wonderful that opposing defenses are threatened enough by an aspect of our offense that they feel the need to double, because that means somewhere, someone is being purposely left open. If Basabe can figure out how to get the ball out of his hands when the double comes, and if the rest of the team can turn that pressure into ball movement and open threes, then pretty soon the double will seem like a less appealing tactic and Melsahn will have more of those sweet one-on-one match-ups to work against. This is as much on the rest of the team as on Basabe, by the way -- many times, a double would come and the rest of the team would stand stock-still and make no effort to make themselves available for an immediate pass.

On the black bile, melancholic side of things were... well, pretty much everything else. And even though it frequently seemed like the Hawks could do nothing right on offense or defense, my impression was that many of their problems derived from one common source: the lack of an inside presence. Our inability to either defend McDermott and his front-court mate Gregory Echenique inside or keep them off the offensive boards was a problem in and of itself, and a problem when Iowa defenders sagged inside and left shooters open on the perimeter. If you didn't miss Jarryd Cole and his overachieving defense and rebounding yet, you probably did by the end of this game. Archie and Basabe, for whatever reasons -- lack of lower-body strength, general size or poor positioning -- had a terrible time keeping the ball out of the paint and defending on the inside once it got there. Iowa also didn't do itself any favors by trapping a little bit beyond its capacities. Creighton seemed to handle any pressure we sent with aplomb, sending the ball around the horn and repeatedly finding open shooters. I know it's Fran's motto that he wants to press and harass on defense, but against Creighton, Iowa's pressure seemed more like a vulnerability than a strength. Many times, Iowa defenders gave help to another player when it didn't seem particularly needed, starting a cascade of late rotations that usually ended with a good look for Creighton. I suppose it should be taken as a positive that Iowa's defensive problems are not necessarily related to poor foot-speed, just poor thinking and positioning, but somehow that's even more worrisome. Iowa's other main response to Creighton's interior strength -- its zone defense -- was spectacularly ineffective at keeping track of shooters, and may have been a cure that was worse than the original illness.

On offense, the same lack of interior presence allowed Creighton to pressure our wing players without fear of sacrificing rebounding position, and the one player Creighton sagged off on -- Basabe -- didn't get rotate the ball quickly enough to make them pay.

There were a few hopeful signs. For one, Josh Oglesby looked like one of the few Iowa players on the court who was familiar with this whole basketball sport, and he did an excellent job creating shots for himself (although mostly in garbage time). Matt Gatens also had a few nice dribble drives and even flat-up got a step on his man driving to the basket, which is something that he hasn't done in a while. And Aaron White had a couple of nice anticipation steals. But beyond that... it got pretty bleak. It could be that Iowa just had a particularly ugly shooting day, Creighton had a hot day, and that's all the you can say about it. And maybe Creighton is just a very, very good team (McDermott certainly looks like a very skilled all-around player). Given the quality of looks Iowa gave up on defense, and the quality of looks Iowa secured for themselves, it's hard not to conclude that there are some pretty fundamental aspects of defending, rotating and passing that need correcting. And Iowa needs Andrew Brommer back pretty desperately. Not only is his interior defense and rebounding superior to Archie's, he actually is a moderate offensive threat and target in the pick and roll.* I'm taking this game as a reality check and a reminder that this is largely the same team that went 11-20 last year, except with less interior depth at the moment.

* Did anyone else notice that Devon Archie apparently has the hands of a small child? He seemed totally unable of catching the ball cleanly off the rebound or the pass, to the point that he gave up at least a couple rebounds to Creighton when they bounced off his hands. This also wreaks havoc with his work on the offensive end and in the pick and roll.