Share All sharing options for: Here's the Thing: Purdue 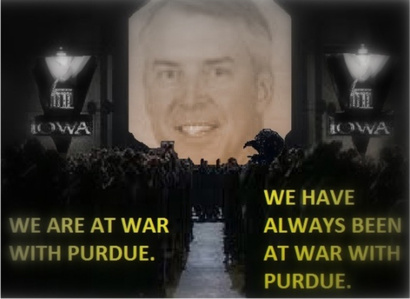 To hell with Purdue.

Sure, we have a border and more than 80 years of history with Wisconsin, a series that is basically tied over that period.  We have recent history with Penn State, a string of success that has added some vitriol to the game (even if it isn't a rivalry in the truest sense of the word).  Hell, even Illinois is within a morning's drive for an 11:00 kickoff.  But Delany gave us Purdue, and so Purdue is our rival.  Our most hated rival, for that matter.  And, because of that, Purdue must die.

Since a 2010 week two demolition of Iowa State, Iowa has lost every rivalry game it has played.  We've lost to Wisconsin in excruciating fashion.  We've inexplicably lost to Minnesota.  We've lost to Iowa State on the day where Steele Jantz went from Mr. Anderson to Neo.  We've inexplicably lost to Minnesota again.  And, let's face it, the prospects of beating Nebraska in Lincoln next week don't look so good.  If we are to beat someone where bragging rights actually exist, it probably has to be tomorrow at 11:00, in whatever town Purdue is in.

Yes, this game is about avoiding Detroit in December, getting to seven wins and a .500-at-worst record in the Big Ten, breaking a streak of road losses that has now lasted more than a year.  Those are all in play, but they are just numbers, and numbers are for the faceless, heelless, feudless NFL.  College football is built on history and rivalry and the false sense of superiority you get when your alma mater's current attendees defeats another school's students in an arbitrary sporting contest.  Without that, those records are hollow, that bowl eligibility an empty proposition, the autumn a disappointment.  If the season is to be considered even a moderate success, we need a head on a pike to parade through the streets.  Jim Delany and his band of marketing consultants has given us Purdue, and so Purdue Pete's head it must be.

Latch onto whatever you need to hate: Their stupid gold-like shade of gold.  Their dumbass truck-train hybrid thing.. The fact that they have something called the Reamer Club.  The fact that their stupid plastic mascot carries around a sledgehammer like Triple H and Triple H fucking blows.  Their fascination with mustaches (actually, you probably shouldn't get hateful about that, because mustaches are pretty damn cool).  It doesn't matter.  Latch onto something to hate, then channel that hate toward Saturday.  We are at war with Purdue, people.  We have always been at war with Purdue.

On Iowa. To hell with Purdue.  OMHR's comin'.