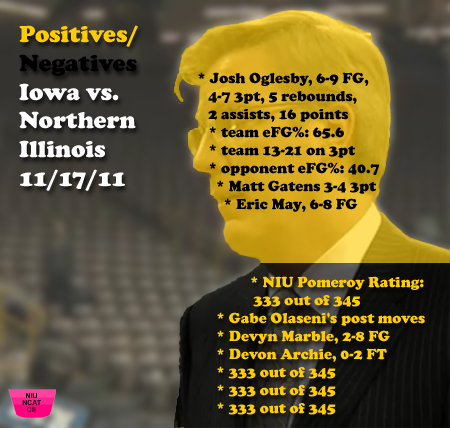 I finally got the internet viewing situation figured out for watching at least some of this game, and the biggest thing I read into it is ... I have no idea how much to read into results like this. Iowa's three-point shooting looked great, which is a nice development, and the bench got a lot of run in the second half. Josh Oglesby had his best game so far, and if he can continue to shoot threes like that, he will really open up the offense for the more driving/slashing types like May and Cartwright. Gabe Olaseni attempted a couple of post moves and they were not so pretty. He will continue to be a major project on that end. And Devyn Marble, who played as the back-up point guard, looked to be forcing his offense a bit in the second half. The defense was rotating, trapping and switching really well in the second half, and Northern Illinois' field goal percentage, which was something like 52% in the first half, dropped to 35% overall, so the subs must have been doing something right.

But, again, Northern Illinois is rated as truly one of the worst teams in college basketball, so this could all mean nothing at all. Sunday's game against Creighton will be a very telling test for the team.