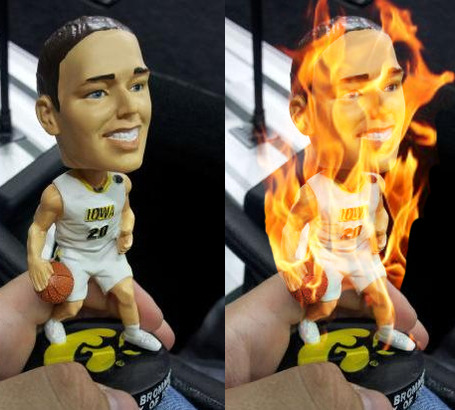 The Andrew Brommer bobble-head doll immediately before (left) and after (right) the controversial invocation by local "Methodist" minister Mola Ram.

University of Iowa administrators held a press conference to issue a formal apology for what they termed a "poorly executed" bobble-head night earlier this week. The special event, which involved giving out hundreds of miniature likenesses of senior basketball player Andrew Brommer, "took an ugly turn", according to UI athletic director Gary Barta, after a pre-game invocation delivered by a man he believed to be a local Methodist minister named Mola Ram. Barta explains what happened next:

"So Monsignor Ram took the microphone, and he invited -- well, commanded, really -- the crowd to hold up their bobble-head dolls. Now, normally I'm not the most cooperative guy, but this Ram guy has a very powerful presence and these eyes that kind of bore into your soul, so I found my arm holding up the Brommer doll along with everybody else. Then he had us recite what he called a 'traditional Methodist prayer' that he said would reduce Andrew's propensity to foul. I knew ol' Bromm' had been having some trouble with that, so I figured 'anything to help the team.'"

The prayer, according to many witnesses, went as follows:

"That's when things got weird."

According to those who were there and were lucky enough to get a Brommer bobble-head, the dolls suddenly burst into flame, with the flame burning most intensely around the right knee area. 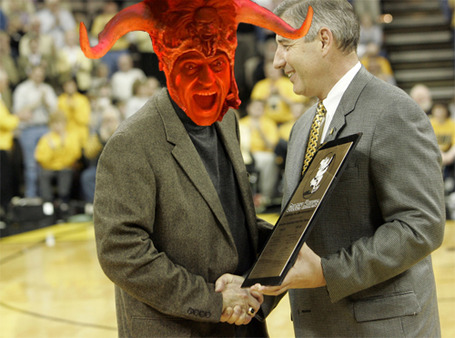 Barta was suspicious, but nonetheless applauded along with the rest of the crowd in attendance because, as he said, "it really was the most impressive Carver pre-game entertainment we've ever had. Way better than those guys who dunk off of trampolines." His worries were aroused, however, when Brommer went down with a knee injury shortly after entering the game.

"I checked with my buddy Chuck Schweiger, who is a Methodist, and he said he had never heard of this 'Kali ma' prayer or of a minister named Mola Ram. After a quick Google translation search, I realized that the prayer was actually a dark curse against the knees of power forwards directed to Kali the Destroyer, the Hindu god of death. My apologizes go out to Andrew on this one. We really screwed the pooch here, buddy."

It was initially feared that the knee would be eternally cursed, but a self-described "amateur antiquarian" in the audience named Henry Jackson apprehended Ram using a whip that had he had somehow gotten through Carver-Hawkeye Arena's rigorous security screening.

"We're looking into how that whip got through, by the way" said Barta, "and we just want to make clear to students that in spite of its usefulness in this incident, whips, lariats and rope weapons of all kinds are not allowed at university sporting events."

Jackson, a resident of Nevada, IA and part-time professor of archaeology at DMACC, hogtied Ram with a swift lash of his whip, turned to Barta and, a roguish smirk splashed across his handsome, sun-weathered, roughly stubbled face, said: "Here's your 'Methodist', Gary." Jackson refused an interview, only asking that his hometown nickname, Nevada, be used in this story instead of his actual first name. "No one calls me Henry. I hate that name."

After extensive questioning, Ram agreed to reverse the spell before attempting an escape via the rope bridge catwalks high above the arena floor and ultimately falling to his death in the crocodile pit surrounding Barta's court-side seats. Brommer's knee is, according to team trainers, still sore from a previous injury and the stress of "a severe metaphysical realignment." Brommer will sit out today's game against Northern Illinois as a precaution.

"I'm cool," said Brommer. "I probably tried to rush things anyway to make it back in time for my bobble-head night, which is kind of ironic considering 'twas that phantasmagorical doll that wreaked such baleful insult to my cursed leg-joint in the first place. I'll probably just ice it and play X-Box until it's better."

Barta said that he has already gleaned important lessons from the experience. "Number one: after speaking with legal counsel, it turns out we're not allowed to have religious invocations of any kind at games, so that was my bad in the first place. Number two: it's really important to do at least a rudimentary background check of any performers. If I had done a quick search I would have found Ram's MySpace page where he brags about doing this kind of thing in the past. Kyrie Irving was his work, apparently. And three: no more bobble-heads from T.O.D Novelty Works of Pankot Palace, India. I don't care if they are 3 cents cheaper per doll than other bobble-heads."

Ram's motivations are unclear at this time, but Barta did note: "Guess who was on his MySpace friends list? Mark Dantonio. I'm not saying, I"m just saying. I'm not going to report it to the Big Ten offices because who would make a determination on a thing like that?" Barta added, however, that sorcery used with the intent to injure "will be a hot topic" at conference meetings this winter.