The story of the Minnesota game is one that has been rehashed over and over again: a string of insane, hideous, frustrating missed opportunities. A good way to appreciate this is to look at the number of "Expected Points" Iowa left on the field. The concept of Expected Points allows us to estimate the number of points a team can be expected to score on average on a drive, given a certain down and distance.* Here's how Iowa rated on a few choice drives Saturday:

* All EP figures come from the Advanced NFL Stats calculator, and thus the usual caveats apply about the model being based on historical NFL stats, not college stats. But the general idea that most teams score either a touchdown or a field goal when they have a first and 10 from their opponent's 10-20 yard line probably carries over.
If you add all those missed points up, you get 17.87. And that total should probably be a little higher, because the strip sack/fumble recovery by Minnesota so drastically changed field position that it was in effect worth an extra point or so in expected points for Minnesota. Of course if that first drive had ended differently the rest of the game would have changed and those subsequent drives wouldn't have happened (yes, I've seen "The Butterfly Effect"), but looking at the numbers does give you a sense of just how many scoring opportunities Iowa let slip away. So how did this happen? Part of it was the dumb bad luck of missing field goals, but part of it was a clever defensive game plan by the Gophers that frustrated Iowa all day. I saw three main components to their plan:
Step 1: No Deep Stuff
Jerry Kill and his staff seemed to have taken the lesson that Iowa's offense was at its most dangerous in the long passing game, because they responded to Iowa with heavy use of deep cover 4 coverage, with the corners playing 8 yards off the line of scrimmage. Here's an example from the third quarter that also shows the unusual set-up of the defensive ends. 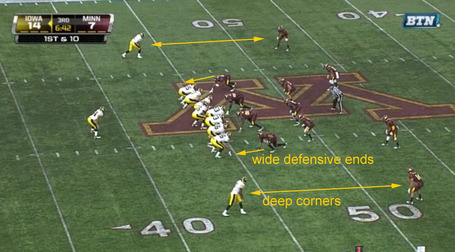 If Iowa was going to beat the Gophers, they would have to do it inch by inch, not in large chunks. Which you can see by the yards James Vandenberg passed for by area of the field:

VDB threw deep only four times, and not for a particularly great average (15 yds/pass).

It certainly seemed like Minnesota was copying the recently popular NFL concept of setting their ends up in the so-called "wide nine" stance, as in outside the tight ends. And unlike NFL teams, who prefer this look solely on passing downs, it certainly seemed like Minnesota went with this look all the time. Why go this route? Here's a good article on the concept, but the basic idea seems to be to pressure the quarterback. And Vandenberg did seem to face pressure all day, even when Minnesota didn't have an explicit blitz call on.  It's hard to say if that was due to the alignment of the ends and how much was due to a mediocre day by the Iowa offensive line, but whatever it was, it worked: Vandenberg never seemed to have time or a lot of space to really set up and uncork his throws. The set-up of the linemen probably also frustrated Iowa's ability to run its standard outside stretch play and the play-action off that stretch play, as the ends were positioned perfectly to meet the running back going outside or the quarterback bootlegging it outside the other way.
There are obviously some weaknesses with this set-up, first being that it leaves an enormous gap between the defensive end and the defensive tackle. And as the Smart Football article above notes, this allows the offensive line to get out into the second level with ease. If you look at where Marcus Coker generated his yardage on Saturday, it wasn't outside, it was all straight up the middle. Minnesota had their linebackers lined up pretty narrowly, within the tackle box, so it was apparently their job to take care of the inside stuff when it inevitably got by the defensive line. That didn't work so well, as Coker went off for 250 yards in three quarters of work, and probably could have gone for more if given the opportunity. The deep corners and safeties actually wound up helping the Gophers here, because even when Coker broke through the linebackers, there was still a layer of defense to stop any long runs.
Step 3: Confusion on passing downs
Sticking with zone so heavily put a lot of pressure on James Vandenberg to make quick reads and find receivers, and he actually did a pretty good job of it: 16-24 for 177 yards, no interceptions, 7.7 yards per throw. Vandenberg generally did a good job of finding an open receiver on a short out or check down, and got the ball out accurately (his receivers didn't help him by dropping four or five of those passes). But the effective part of the Gopher scheme came not in making it impossible for Vandenberg to pass successfully, but in cajoling him into throwing it short rather than long. They did this three ways: first, by dropping very deep, second, by blitzing on obvious passing situations, most successfully on the crucial third down in Minnesota territory where Vandenberg was stripped of the ball: 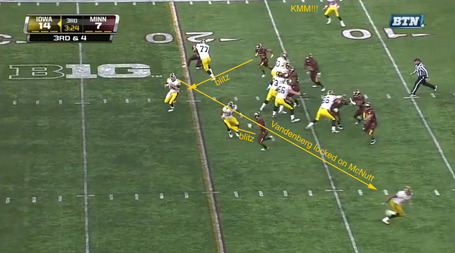