Guess what's back?  Our regularly-scheduled nostalgia trip with Iowa-Penn State games of yore, courtesy of our favorite Hawkeye YouTuber, The Hawkeye Historian.  Up first, a rainy day in 1996:

Seriously, there's room for an honest debate over who Iowa's best receiver was -- Tim Dwight?  DJK?  Marvin McNutt? -- but there's no denying that Timmy D was, hands down, the greatest punt returner in Iowa history.  His punt return here -- on a wet, soggy Happy Valley turf, no less -- was electrifying, amazing, breathtaking, [insert gushing adjective of your choice].

And now we hop in the wayback machine and go back to 1976, a time before Timmy D, before Hayden, hell before the tigerhawk:

-- Those helmets just look... naked.
-- Nice to see Penn State has been using the same Nittany Lion mascot for at least 35 years.
-- I raved about Dennis Mosley a few weeks ago, but... damn, he was fun to watch.  So of course it looks like he got about three carries in the whole game.
-- "Here's Bob Commings... he feels he's turning this Iowa program around."  Yeah, no.
-- Field goal kicking... off a tee?  Yep.  Welcome to a different era.
-- Even with a tee, though, kicking was one hell of an adventure, as evidenced by multiple missed field goals (including a potential game-winner by Penn State inside the 15-yard line at the end of the game).  And we thought we had it bad now...
-- Down 7-0 with 9 minutes to go, Penn State scores a touchdown and... goes for two?  Wha--?  I'm still trying to wrap my head around that one.
-- Beaver Stadium looks weird.  The stands, the field, the end zones... all of it.
-- I choose to believe JoePa has his jacket at the end of the game because he doesn't want to be late for his reservations at the supper club, where he'll get the usual: T-bone, medium; baked potato, no sour cream; single malt, no ice. 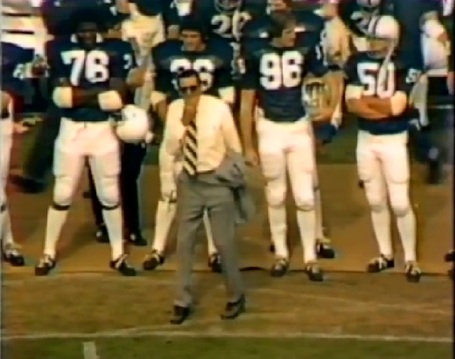 And for our last trip through time today, we head back to 1983:

-- Ah, the tigerhawk.  That's more like it.
-- CHUCK LONG
-- OWEN GILL
-- Seriously now: CHUCK EFFING LONG
-- STOOPS!  I'm pretty sure that was Mike.
-- Owen Gill was awesome in this game: he runs, he catches... he did it all.
-- Honestly, was there anything Chuck Long couldn't do at Iowa?  He lofts a nice deep ball and then, a few plays later, he runs the goddamn option to score a touchdown.
-- Norm Granger absolutely jukes #32 for Penn State into Ohio on that touchdown run.
-- Chuck Long.  Ronnie Harmon.  77-yard TD pass.  Wow.  The Iowa offense under Long was so much fun.
-- WTF WAS WITH JOEPA'S PANTS?! 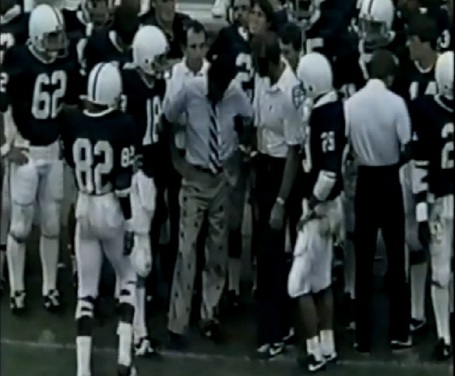