Share All sharing options for: Minnesota 22, Iowa 21: Welcome To The Queso Bowl

Exciting news, friends!  BHGP is proud to present the perfect shirt for the the 2011 Iowa football season!  Don't be left out in the cold -- all the cool kids will be wearing them! 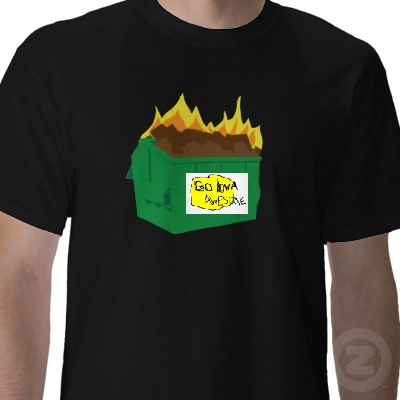 Good news, Iowa fans!  No need to make bowl plans this year.  Think of all the money you'll save by staying home for the holidays.  Iowa sits at a thoroughly meh-tastic 5-3 with two-thirds of the season in the books -- and that was the easy portion of the schedule.  Iowa faces three ranked opponents in November and right now looks unlikely to be favored in a single game.  To get to six wins and give us an opportunity to even entertain the possibility of spending Christmas in beautiful Detroit, Iowa will need to pull a win out of their asses.  First up is Michigan, led by Denard Robinson, aka the gazillionaire man's MarQueis Gray -- the same Gray who shredded Iowa in the fourth quarter, of course.  After that Iowa entertains Michigan State, who will likely blitz Vandenberg into a quivering pile of goo.  The penultimate game sees Iowa hit the road to take on Our Most Hated Rival, and while they're not especially good this year... neither are we.  And we're downright terrible on the road.  And the season ends with a road date in Lincoln -- against a Nebraska game that just stonewalled last week's Big Ten darlings, Michigan State.  If you can find a win there, you're relying on irrelevant historical trends (Michigan State doesn't win in Kinnick!  Iowa's won two in a row over Michigan!  Iowa always plays one inexplicably good game!), the "Iowa plays better as an underdog" meme or blind faith.  Let me know how that works out for you.

Good news, Albert Young!  You no longer hold the dubious Iowa record of best rushing performance in a loss.  Your 202-yard, 2 TD performance against Northwestern in 2005 has officially been eclipsed by Marcus Coker's 252-yard, 2 TD performance today.  What a goddamn waste.  How do you have a 250-yard rusher and almost 450 yards of offense and still lose?  Hello, offensive inefficiency.  Look, this game was in so many ways a 2010 special, complete with a fourth quarter defensive meltdown and special teams miscues aplenty, but the offense holds plenty of blame, too -- just as it did last year.  Yards are nice, but yards are fairly meaningless without points.  Iowa took the ball inside the Minnesota 35 seven different times on Saturday... and four times came away with zero points.  Four times!  They turned the ball over on downs at the Minnesota 31, missed a 24-yard field goal, missed a 43-yard field goal, and lost the ball on a strip-sack at the Minnesota 14.  That is precisely how you keep an overmatched underdog in the game and give them an opportunity to pull the upset.

Good news, the script hasn't changed!  Would you believe that Iowa was again the victim of a trick play on special teams?  Would you believe that Iowa was victim to the exact same trick play that the exact same opponent pulled last year?  Would you believe I'm not kidding at all?  Look, I know an onside kick in a one-score game with 8:22 to go is not the most conventional call.  But there were good reasons for Iowa to think it was a possibility.  One, the only thing stopping Iowa's offense most of the day was Iowa themselves (with the assistance of the odd big Minnesota defensive play), so it doesn't take an oracle to think that Jerry Kill might decide that he has better odds of recovering an onside kick (especially an "unexpected" onside kick) than giving the ball back to Iowa and hoping his defense can get a stop. Two, Minnesota knew we weren't expecting it and that would be vulnerable to it -- we've proven it time and time again in the past.  Unfortunately, that speaks to a larger problem, which is that Iowa is utterly predictable -- every coach on our schedule knows what we will do -- and what we won't do -- and that makes it easy for them to scheme for and around our tendencies.  That leaves Iowa with nothing to do but try to out-execute the opposition, since the element of surprise has been surgically removed from the gameplans.  We've heard it in the past from teams like Northwestern, who claimed to know the exact plays we were running; here Jerry Kill knew exactly how Ferentz would behave -- and attacked accordingly.

Good news, Ken O'Keefe is off his meds!  Wait, that isn't even good news ironically.  O'Keefe has been a popular whipping boy among Iowa fans for, oh, pretty much ever, often unfairly.  But he did not call a good game today at all, especially in the second half.  The 446 yards of offense might seem to say otherwise, but don't listen to them -- that has more to do with the general ineptitude of Minnesota's defense than anything else.  First, the playcalling on the first few drives. Yes, Coker was running the ball well... but Marvin McNutt was in single coverage with the Minnesota cornerback on a number of plays -- why not exploit that?  Second, let's talk about the play-action pass on 3rd and 4 from the Minnesota 14.  Why call a slow-developing pass play for a quarterback that struggles to read the blitz and against a defense that loves to blitz?  Meanwhile, Marcus Coker had only had six runs of six or more yards earlier on that drive.  Yes, he'd stuffed for no gain on 2nd down, but still: Coker was money more often than not today.  Third, what in the hell was that last drive?  You have over 2:30 left in the game, a timeout in your pocket, college rules that stop the clock on every first down, and a running back that had gobbled up over 250 yards already in the game (and who couldn't have been that tired, since the offense had been off the field for over ten minutes of game action (and at least double that in real time)... so you go five wide exclusively and don't even try to run the ball?  How does that seem like a good idea at all?  Not to mention that it reduces the number of blockers available to stop Minnesota's blitzers.

Good news, the coaches aren't the only ones who had terrible games!  For as terrible as many of the coaching decisions were today, they can't claim all the blame -- pretty much every player not named "Marvin McNutt" or "Marcus Coker" was a key party to this disgrace.  James Vandenberg?  Through ten games as a starter, he still can't read a blitz to save his goddamn life (nor can he audible into a pass play when the greatest receiver in Iowa history has single coverage by an undersized Minnesota defender, apparently).  Riley Reiff?  You're not cashing NFL checks yet, son, so quit the ole blocking -- he appeared to get burned badly by a simple speed rush on a few of the sacks.  His first round draft grade looks laughable with the way he's played this year.  Shaun Prater?  Hate to break it to you, man, but pre-season all-conference cornerbacks don't get burned over the top as much as you have this year.  Michael Meyer?  Your job is to kick the ball -- including field goals.  It is not your job to inexplicably miss a chip shot field goal and bonk another one off the crossbar.  Brad Herman and Jason White?  I know it's a pressure-packed situation, I know the offensive playcalling was dumb, and I know Vandenberg was jittery... but you still can't afford to drop relatively easy catches there.  (And an extra raspberry to the coach who decided that Herman, he of the many drops this year, deserved a spot on the field more than the tight end who actually made a diving, acrobatic catch earlier in the game.  Best of luck with your transfer this off-season, C.J.  Hope you find a school that can actually use you.)  Pretty much every Iowa defensive player?  Tackling at first contact -- have you heard of it?  You might want to give it a try.  (And another extra raspberry to the coach who decided that James Morris should still be playing on a bad ankle.  It's clearly limiting his effectiveness -- he's limping off the goddamn field.  Playing him at three-quarters speed isn't doing anyone any favors.)

Good news, this is not just a lousy team -- it is a stupid team, too.  Huzzah for diversity!  I don't know what explanation there is other than gross stupidity when this team keeps falling prey to the exact same crap over and over and over and over.  Running quarterbacks, soft coverage, baffling offensive play-calling, special teams incompetence: this same shit has been leading to losses (or near-losses) for quite a while now.  The only way a loss to Minnesota yesterday might have been remotely palatable was if half the team had contracted swine flu and Iowa had to field a reserve team.  (Which didn't happen.  I think -- the swine flu part, I mean.)  That's a roundabout way of saying that a loss would have felt terrible under 99% of circumstances... but it really feels terrible when it occurs under THE EXACT SAME CIRCUMSTANCES that have bedeviled Iowa so frequently in the recent past. And ultimately the blame for that has to fall on the coaches, and Ferentz especially since he's the man at the top of the ladder.

Look, I like Ferentz.  I think he's been a wonderful ambassador for the program, the university, and the state and I know he and his wife have done a lot for the community.  I am deeply grateful for his coaching accomplishments, too: 2002-2004 were fantastic and the Orange Bowl win was tremendous, among others.  I'm well aware that the grass isn't always greener: I still remember the Tom Davis-Steve Alford transition, after all.  And in football terms, we don't have to look far (Iowa State, Minnesota) to find examples of schools who struggled after firing coaches for the crime of being good but not "good enough."  But something clearly isn't working with the current approach.  This operation has become stagnant and all-too-predictable.  Something needs to change.  If Ferentz himself can't engineer those changes, Barta may have no choice but to find someone who can -- he can ill afford for the heart of the Iowa athletic department to break down (this year may have been a sellout even in the wake of last year's disappointment, but that isn't going to last if Iowa continues to flirt with .500 or worse and lose to the likes of Iowa State and Minnesota).  I hope he can figure out a solution -- but I'm losing more and more faith in that each week.