In the lead-up to the Northwestern game, I believe I called Iowa an "average" running team.  As it turns out that assessment may have been generous: post-jNW game, Iowa is 77th in the nation in running the ball (133.5 ypg).  The stats are even grislier when you compare Iowa to just their fellow Big Ten teams: they rank 12th... out of 12 teams.  Yes, dead-last.  Behind Indiana.  Behind Minnesota.  Behind everybody.  How did this happen?  We entered the season thinking that the running game would be the strongest part of Iowa's offense: we returned a sophomore running back (Marcus Coker) who had run for 600+ yards as a freshman and had a blistering performance on the Insight Bowl and four offensive linemen with starting experience (Riley Reiff, Marcus Zusevics, Adam Gettis, James Ferentz), and we returned an offensive coordinator who loves to pound the rock when given the opportunity.  So what's the problem?

It's not really Marcus Coker's fault.  To be sure, he hasn't been the same forceful, dominating runner that he was often last year; injuries hampered his early season efforts (and seemed to rob him of some confidence) and the offensive line struggled to consistently open good holes.  But Coker hasn't been bad: he's run for 578 yards on 127 carries.  That 4.6 ypc average isn't stellar (Shonn Greene ran for 6.0 ypc in 2008, for reference's sake), but it's not awful.  He ranks sixth in the Big Ten and fourth among just running backs.  That's okay.  The larger problem?  He is getting almost zero help.  Let's drive that point home with the help of some charts because I am a closet Georgia Tech fan they are pretty (they can all be embiggened by clicking on them):

Just sixty-four of Iowa's total rushing attempts this year have gone to a player other than Coker.  Only one time in the last five years has a single Iowa running back hoarded carries as much as Coker is on pace to this year: that would be one Mr. Shonn Greene in 2008.  Now I don't think I need to tell you this (you've watched the last six games, yeah?), but Marcus Coker is no Shonn Greene (nor is the 2011 Iowa offensive line as good as the 2008 Iowa offensive line).  I like Coker (a lot, actually), but that's just the facts.  In 2008, Shonn had 63% of Iowa's total carries.  In other recent years, the lead ball carrier has had around 50% of the total carries.  Adam Robinson had 43% of the carries in 2009 and 47% of the carries last year.  Albert Young had 53% of the carries in 2007.  And by Big Ten standards, Coker is really getting overworked. 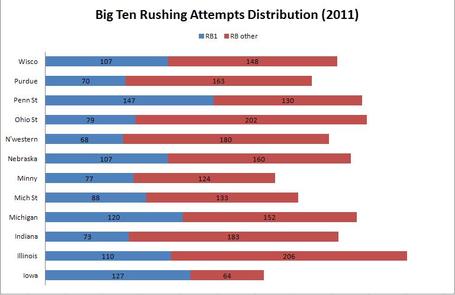 The only other Big Ten team with a primary rusher with over 50% of his team's carries is Penn State, where Silas Redd has been hoovering up carries like a fat kid at a buffet.  And even he's only at 53%.  Some teams -- like Northwestern (27%),  Ohio State (28%), Indiana (29%), Purdue (30%), and Illinois (34%) -- share the wealth a lot, although sometimes that's unintentional (for instance, Ohio State's stats would probably be skewed more towards Boom Herron if he hadn't been suspended for the first six games of the season) and sometimes it's because there just aren't any decent options (cough cough, Indiana, Northwestern).  But even the best running attacks in the league don't rely as heavily on one runner as Iowa is on Coker.  At Wisconsin, for instance, Montee Ball (currently #2 in rushing yards among Big Ten running backs) has only carried the ball on 42% of Wisconsin's carries.

The production charts seem to reflect this as well: get more people involved, get more rushing yards. 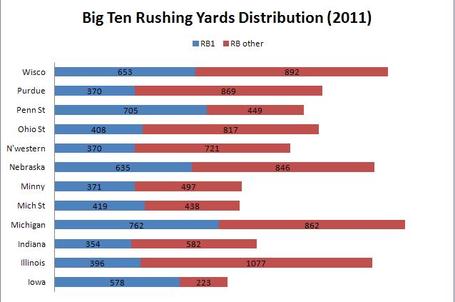 Iowa?  Through six weeks, Iowa's second-leading rusher is... Mika'il McCall, with 61 yards on 9 carries.  That would be the same McCall that was injured in the first quarter of the Tennessee Tech game.  Not counting James Vandenberg, only one other Iowa player has over ten carries this season: De'Andre Johnson, who has 11 (good for 50 yards).  And he's only got that many carries because he got some garbage time carries last week against Northwestern.  Other than Johnson, we've seen Damon Bullock get 8 carries (22 yards), Jordan Canzeri get 5 carries (30 yards), and Jason White get 2 carries (11 yards) despite being listed as RB2 since the end of training camp.  All told, Iowa's back-up running backs have combined for 35 carries and 174 yards.  Take out McCall's efforts and that drops to 26 carries for 133 yards.

Last year, Coker ran the ball 114 times for 622 yards; obviously those numbers were goosed a bit by the fact that injuries and "academic indigestion" kept Robinson out for most of November, but still.  In 2009, Wegher complemented A-Rob to the tune of 641 yards on 162 carries.  In 2008, even with Greene dominating everything, Jewel still rumbled for 463 yards on 91 carries.  And in 2007, Damian Sims snatched up 499 yards on 100 carries as Albert Young's understudy.  This year, Iowa's RB2 (we'll use Johnson since he's #2 in carries right now) is on pace for a whopping 22 carries and 100 yards.  That's not bad... for a game.  That's downright awful for a season.

Now obviously this wasn't the gameplan the Iowa coaches drew up in training camp.  It's obvious from their comments (and the fact that he saw so much action so early in the Tennessee Tech game*) that they liked McCall a lot.  He probably would have seen a pretty fair number of carries if he hadn't gotten injured in that game.  He certainly looked very promising in the limited time we saw him.  But that was six weeks ago and it was immediately obvious that he wouldn't be coming back anytime soon for Iowa (although reports this week suggest that he might be able to return before the end of the season) -- and yet over the next 23 quarters, we saw the non-Coker running backs get just those aforementioned 26 carries for 133 yards (despite the fact that Coker was clearly banged up and not himself for many of those games).  Yes, Bullock and Canzeri are true freshmen and not well-versed in blocking or blitz pick-up and, yes, Johnson is still finding his footing after rehabbing from an ACL injury and, yes, White is a walk-on seemingly best-suited to special teams and the occasional slot receiver role... they still needed more carries than they've been getting.  Wearing Coker to the bone (only Redd is averaging as many carries per game -- 21 -- as Coker) isn't doing him any favors -- and it's not helping the Iowa running game all that much, either.

* Although that also was a partial result of Coker's early season injuries, I imagine.

The next two weeks offer reason for hope when it comes to the Iowa rushing attack -- Indiana ranks dead last in the league at run defense, giving up a whopping 227 ypg (which is also good -- or maybe bad? -- enough for 117th in the nation), a full 50 yards worse than the team in 11th place (Northwestern).  Then again, we played that same Northwestern team last week and ran for only 155 yards against them, less than their average performance (172 ypg)**.  Minnesota ranks 9th in the league at 167 ypg -- and they'll almost certainly be lower after Nebraska gets through with them this week.  These are two bad run defenses that Iowa should -- should -- be able to feast on.  The fact that we're the proud possessors of the worst rushing offense in the league makes that less of a sure thing, though -- especially if we continue to rely so heavily on Coker.  He can probably run for 100+ on both the Hoosiers and Gophers, but 170+?  220+?  That's asking a lot of him... and, frankly, it's probably more than we need to be asking of him against those two.  These look like perfect games to give guys like Canzeri and Johnson more extensive runouts with the Iowa offense.  Your weird but true factoid of the week is that Iowa has had a freshman running back run for 100+ against Indiana in three straight years (Jewel Hampton in 2008, Brandon Wegher in 2009, Coker in 2010); it would be very nice to see Canzeri, Johnson, or Bullock continue that trend on Saturday.

** To be fair, this almost certainly had a lot to do with the fact that Iowa ran only 50 plays last week.  Given more plays, they likely would have ran the ball more and with them averaging a healthy 5.5 ypc, they would have gotten up to 172 yards in no time.

Of course, the dirty little secret of the Iowa offense is that outside of 2008, we haven't been a good running team for a while.  (The 2011 figures below are projections based on the current year-to-date stats.) 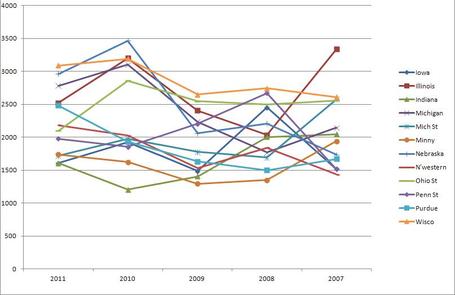 Over the last four seasons, Iowa's placed eighth or lower in the league three times (2007, 2009, 2010).  Twice (2007, 2009) Iowa's placed 10th in the league.  Even in the great Shonn Greene year of 2008 Iowa placed a scintillating... fourth.  And this is a team that (a) loves to run the ball, (b) wants to run the ball, and (c) prides itself on offensive line play.  Granted, the constant predations of AIRBHG haven't helped matters in the least -- Iowa's only been able to roll out an upperclassmen twice in that span (2007 and 2008) and you're going to take your lumps when you keep throwing freshmen (true or redshirt) into the fire year after year (unless those freshmen are Marcus Lattimore-types... which they haven't been).

But this is still worrying stuff -- and a big reason why Iowa has fielded average (or worse) offenses so often over the last five years.  The passing game has been able to pick up the slack to a degree over the last year and a half -- Ricky Stanzi posted some of the best numbers an Iowa quarterback has had in decades and Vandenberg is, remarkably, on pace to almost equal him this year (2010 Stanzi: 64% completion, 3004 yards, 25/6 TD/INT; 2011 Vandenberg thru six games: 61% completion, 1488 yards, 12/4 TD/INT) -- but it's mainly just been able to get the Iowa offense back into the range of "mostly respectable."  When you consistently field average or worse offenses, the only way to avoid average or worse results is to have excellent defense and special teams.  Iowa had that in 2008 and 2009 and was able to scrape and claw their way to 20 wins.

Of course, in 2011 Iowa obviously doesn't have an excellent defense, once again putting more pressure on the offense to pick up the slack.  In both of Iowa's losses this year (Iowa State and Penn State), the offense has turned in sub-par efforts.  Unless Vandenberg starts throwing for 300+ a game on a regular basis (which, honestly, he might be able to do with these receivers if given the chance...), the Iowa offense is going to need more out of the running game.  Coker's more or less doing his part -- I'm not sure it's fair to expect more than 100 ypg from him -- which means it falls on the remaining running backs to become meaningful contributors.  For that to happen, the coaches need to give them opportunities -- and they need to make something of those opportunities.  The Northwestern game last week seems all too indicative of the way Iowa is going to need to win this year -- via shootouts -- and if that's the case we need to go into battle armed with more than a blunt knife and an old revolver.