It's Not Plagiarism If You Link To It Loves Card Stunts

Share All sharing options for: It's Not Plagiarism If You Link To It Loves Card Stunts

Iowa is stuntin'.  So just how did those awesome card stunts come about?  With the oversight of JacobDavis Production, a  company that specializes in this sort of activity -- and a lot of grunt work:

The execution of the stunts didn’t come easily. About 300 volunteers, from Iowa City West High School’s music organization and the UI Dance Marathon, earned their donations from JacobDavis Productions, who orchestrated the event. The Iowa students channeled their donation to the UI Children’s Hospital.

From 9 a.m. to 6 p.m. Friday and from 7 a.m. to 2 p.m. Saturday, the volunteers taped down the cards to each of the seats. Because of strong winds Saturday, additional tape had to be used. The volunteers were taxed, and needed every available minute to finish the task.

"Kudos to them for sticking it out," said Klatt.

Had Friday and Saturday brought steady rain, the stunt would have probably been postponed for another game. But the ideal time to do it was a night game, with the extra hours available on Saturday for the grunt work.

The total cost of the stunt was about $80,000, but considering that (a) Farm Bureau picked up at least part of that tab and (b) Iowa's gotten an incredible amount of coverage and free (positive) publicity for the stunt, I'd say that it was money well spent.  Kudos to everyone involved.  We've derided the Iowa athletic department's marketing efforts (or lack thereof) in the past, but every now and then they manage to hit a home run and this -- and the "Black and Gold Spirit Game" in general -- definitely qualifies.

The Franimal knows.  We've made no bones about the fact that this year's non-conference schedule for the men's basketball team really, really sucks, from an interest standpoint.  Outside of the usual in-state rivalry games the Big Ten-ACC Challenge, it's damn hard to find a game with an opponent that gets the pulse racing -- maybe Creighton.  But, fear not, Iowa fans.  Fran hears you:

"I’ve always tried to schedule based on what I thought our team’s capabilities were that year," said McCaffery, who enters his second year as coach. "For example, one year at Siena we thought we were going to be good. We had the No. 1-ranked non-conference schedule in the country. We took them all on.

"Once our program continues to improve, then you want to take them all on. You want to play, if you can get a home-and-home with Kansas or a Duke or a Carolina or a UCLA, Kentucky, anybody like that, get TV games, you’ve got to do that. You’ve got to see what your team is capable of doing and test them during the year and get your program exposure on national television."

"Do you always look for, ‘How can we get the most wins?’" McCaffery asked. "Well, a lot of teams have done that over the years, and it’s hurt them at the end of the year. Their RPI is what it should be. You’ve got to have your eye on RPI."

It shouldn't really surprise me anymore, but the extent to which Fran absolutely Gets It is completely and utterly refreshing -- and exciting.  Playing a schedule of nobodies is fine this year because getting wins and establishing a winning attitude is more important than improving our RPI standing.  He understands the juggling act that is scheduling, he understands how to market the program, he understands how to reach out to fans and the media, he understands how to recruit... the only thing missing from the equation is wins on the court, which will hopefully be forthcoming this season.

Daddy needs a healthy linebacker.  Angry Iowa Linebacker Hating God clearly wasn't sated by the havoc he wreaked last year; in addition to sending Bruce Davis packing a month ago, that spiteful deity has also hit almost every other healthy linebacker with an injury: Shane DiBona (Achilles tendon) and Dakota Getz (ACL) are out o for the season, and James Morris (ankle) and Anthony Hitchens (knee) missed the Northwestern game, while Tyler Nielsen has been banged up almost all season (first a twisted ankle against Iowa State, rumors of a broken hand against Northwestern).  That laundry list of injuries brought Quinton Alston and Tom Donatell onto the field for extended action.  Who was after them?

When true freshman Quinton Alston entered the game at middle linebacker in the second half, Iowa might’ve been fresh out of linebackers. The Hawkeyes (4-2, 1-1 Big Ten) were definitely out of scholarship linebackers. It would’ve been on to the walk-ons.

"They didn’t tell me that," linebacker James Morris said Tuesday of the double-secret "plan C." "They [coaches] didn’t tell me that if they did. I didn’t know if they had a little red button somewhere in a suitcase or something."

Gulp.  On the bright side, the linebacker health situation is looking a little brighter for Indiana -- both Morris and Hitchens are expected to be available.

-- The National Football Post wonders if Michigan can win with Denard Robinson at quarterback.

-- Iowa guard Jamie Printy is on the watch list for the Wooden Award, one of the top honors in women's basketball.

-- Why does the University of Michigan hate cute kittens? 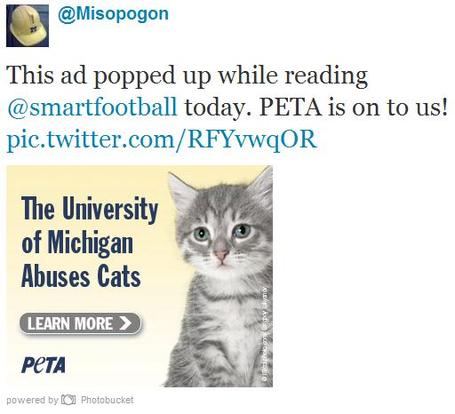