The Wreck of the Patrick Fitzgerald

Share All sharing options for: The Wreck of the Patrick Fitzgerald 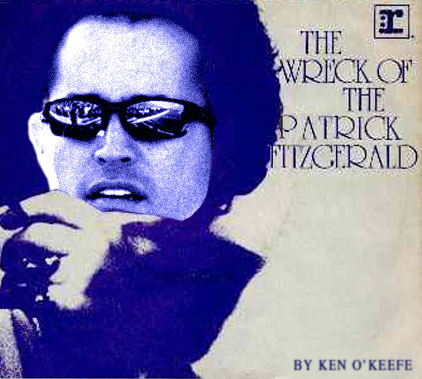 The Iowa coaching staff's new album 36 Super Black & Gold Hits has been doing so well (#4 on the competitive Football Song Parody/New Zealand Folk Parody charts!) that BHGP Records has decided to release a single: Ken O'Keefe's soulful rendition of Gordon Lightfoot's famous song. Here are the lyrics, which Ken swears are "just a whimsical fantasy and certainly not legal evidence of intent to commit criminal acts":

The legend lives on from Rick Venturi on down
of the football team called "just Northwestern."
That team, it is said, never gives up for dead
so long as they're playing Kirk Ferentz.

With a cranium as square as an Ikea Karlstad chair
Pat Fitzgerald was feeling quite cocky.
As the team bus rolled in to the Coralville Holiday Inn
He didn't see things about to turn rocky.

The potatoes arrived at 9:45,
As the Wildcats settled down for the evening.
No one was suspicious, it all looked so delicious
Topped with sour cream and strange yellow seasoning.

"What a nice treat from Pat", the players said as they sat
And partook in their carbo-load supper.
They never noticed the dude that had brought them their food
Looked a lot like that kicker Mossbrucker.

The sickness kicked in about a quarter past ten
When the purple footballers started feeling not so well.
The vomit it flew like some vile potato stew
On the taupe walls of that sad motor hotel.

In the kitchen that night a masked man turned out the light,
Stowed his gear and escaped like a pro thief.
A vial on the floor and some strange yellow spores
Were all the evidence left by Ken O'Keefe.

Ken had broken quite bad, had gone down to his lab
Made some methicillin-resistant staph aureus
He could not bear the cost of another Hawkeye loss,
So he said "let's let science win for us!"

Pat Fitzgerald ran down, his square jaw fixed in a frown
He thought "God, please spare me Danny Persa."
His worst fears were confirmed as he saw Dan twitch and squirm:
QB1 had fallen prey to the MRSA!*

Fitzgerald then had paid for his wizarding ways
When he got his Rick Stanzi injury wish.
And the old saying was proved true as he now sadly knew:
"Revenge is best served as a side dish."

The legend lives on from Rick Venturi on down
of the football team called "just Northwestern."
That team, it is said, never gives up for dead
Except when they're poisoned with MRSA.

* Pronounced "Mer-sa" and quite a serious medical problem these days!