Iowa-Northwestern Hinges On The Iowa Offense -- Not The Iowa Defense

Share All sharing options for: Iowa-Northwestern Hinges On The Iowa Offense -- Not The Iowa Defense

Those figures are the points Iowa has scored against Northwestern in their last five meetings.

Those figures are the points Iowa has conceded to Northwestern in their last five meetings.

There's a perception among Iowa fans that Norm Parker's defenses have struggled mightily with Northwestern's spread offense.  The problem is this isn't true -- at least not precisely.  And it certainly isn't the biggest reason for Iowa's 1-4 record against Northwestern in their last five meetings.  The biggest reason is an Iowa offense that has consistently underachieved against our Armani overlords. 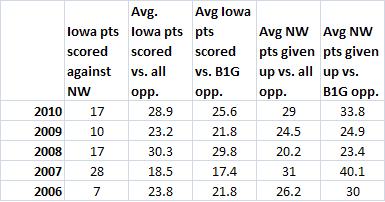 Iowa has cracked the 20-point barrier just once in their last five games against Northwestern -- in 2007.  Coincidentally (or, um, not), that was also the last time Iowa beat Northwestern.  As we see in the table above, Iowa has consistently scored less than both their own scoring average (overall and in Big Ten games) and less than both Northwestern's average points conceded (overall and in Big Ten games).  In fact, in most cases Iowa has been scoring substantially less against Northwestern than their scoring averages would suggest they should.  In 2006, Iowa scored two touchdowns fewer than their average.  In 2008, the best Iowa offense since 2002 scored just 17 points -- 13 points fewer than their average in Big Ten games.  In 2009, a frankly weak Iowa offense was twice as weak as normal*.  And in 2010, another fairly strong Iowa offense was held a full touchdown below its average against Big Ten foes.  The lone exception?  2007, where Iowa exceeded their anemic average by a full ten points.

* Yes, yes, WOOTENOCALYPSE, unprepared Vandenberg, etc.  It's still tough to swallow 0 points at home against Northwestern when he went to Columbus and hung 24 on OSU in the de facto Big Ten title game a week later.

But Iowa's results look even worse when compared to Northwestern's average points conceded.  Iowa scored a full three scores less than Northwestern's average in 2006.  They scored a touchdown less in 2008, and two touchdowns less in 2009 and 2010.  Even the sole good offensive showing for Iowa -- 2007 -- was a disappointment: Northwestern gave up 40 points on average to Big Ten teams that year!  Despite hiring a legendary former linebacker as head coach, Northwestern has routinely fielded underwhelming -- or downright bad -- defenses in the Fitzgerald era.  Non-Iowa Big Ten teams have lit up the Wildcats routinely over the last five years.  But not Iowa.

Meanwhile, what about the Iowa defense? 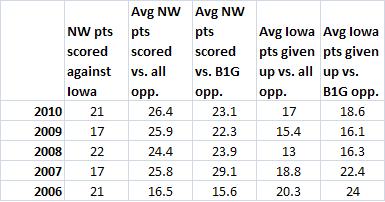 In the last five years, Iowa has kept Northwestern from scoring at or below their yearly averages in every single game but 2006 (where the jNW offense erupted for... 21 points).  In terms of where Northwestern's scoring output against Iowa compares to Iowa's average points allowed over the last five years, jNW outpaced Iowa's average points allowed (except in 2006 and 2007), but not significantly: two points in 2010, one point in 2009, six points in 2008.  Overall, Iowa's defense has given up 19.6 ppg against Northwestern over the last five years -- not excellent, but not awful.  But it's a point total that's low enough to give Iowa a chance to win all of those games against jNW... if the offense had produced a respectable number of points.  Unfortunately, 15.8 ppg (Iowa's average output against jNW over the last five years) is not "a respectable number of points," especially against a team that has consistently fielded middling-to-poor defenses.  It would be one thing to struggle to score 20 points consistently against the likes of Ohio State and Penn State... but Northwestern?  Northwestern is not one of those teams.

To be sure, the defense isn't blameless in Iowa's losses to Northwestern over the last five years.  That almost-20 ppg average is decent but definitely not great.  Even when they haven't given up many points against Northwestern, they've struggled to get them off the field.  In 2010 (31:09 to 28:51), 2009 (34:20 to 25:40), 2007 (31:21 to 28:39) and 2006 (33:22 to 26:38) Iowa lost the time of possession battle to Northwestern and they've allowed the Wildcats to run at least 70 plays a game (and at least 11 more plays than Iowa) every single year since 2006.  Obviously, part of that is a function of the no huddle, up tempo style Northwestern prefers to employ on offense -- but it's also a function of an Iowa defense that has struggled to shut down drives and force punts or turnovers (Iowa has forced just 8 turnovers in these five games versus jNW and has a -6 overall turnover difference in those games) at times.  And they've given up back-breaking drives late in the game -- most memorably last year, but they also gave up a game-winning drive in the fourth quarter in 2008 and a game-icing drive in the fourth quarter in 2006.

The Iowa defense hasn't completely shut down Northwestern's offense in any of the past five meetings, nor have they have gone out and won the game on their own... but they have done well enough -- every single year -- to put Iowa in a position to win.  The Iowa offense simply isn't holding up its end of the bargain.  For Iowa to reverse the curse and end their losing streak in this series, that simply has to change -- the offense needs to produce the sort of results (i.e., pretty good) that you could reasonably expect from an offense playing the Northwestern defense.  And it's even more imperative that the offense carry its share of the load (and then some) this year, since if the first five games of the season have taught us anything, it's that relying on the defense to carry this team is an invitation for disaster.  The current Northwestern team has lost three games in a row and in each game the defense has been shellacked: they gave up almost 400 yards rushing to Army, almost 400 yards passing to Illinois, and well over 500 yards of total offense to Michigan.  They are a poor defense.  It's time for Iowa's offense to stop making lousy Northwestern defenses look like The Purple People Eaters.