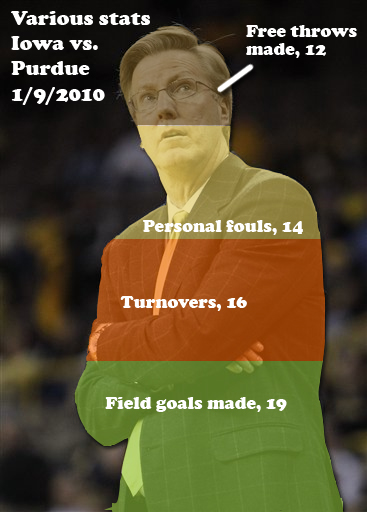 It was a bad case of Sunday morning coming down for the Hawks when they played Purdue at the ungodly hangover hour of 11 a.m. yesterday.  For all the progress the Hawks have made over the past few weeks, the team took several giant steps back against the Boilermakers in West Lafeyette.  Iowa reverted to their old, bad ways, making turnover after turnover to start the game, and yet again allowing an ace three-point shooter roast them from outside.  For much of the first half, Iowa had more turnovers than field goal makes; their field goal number only surpassed their turnover number with Eric May’s three-pointer at the 19:35 mark in the second half.  Watching the game, it certainly felt like an even bet whether Iowa would make a shot or turn the ball over on a given play, and it turns out it pretty much was: Iowa had 19 FGM and 16 TOs.
A lot of credit goes to Purdue for harassing the Hawks on the perimeter and forcing them to make plays off the dribble.  Iowa just doesn’t have the speed or skill at most positions to make teams pay for tight pressure, and they get easily flustered when other teams tighten the screws.  To make matters worse, the Iowa just doesn’t have the shooting at the perimeter to force help defenders to stay home (pop quiz: if you're a defender, do you: a) help on a Matt Gatens drive, or b) guard Jarryd Cole 18 feet from the basket?).  Purdue is pretty much the perfect team to frustrate the Hawks on O, with quick, active defenders at every position, and the Hawks struggled to even get shots off for much of the game. Melsahn Basabe, last seen playing like Superman against the slower Jared Sullinger, met his athletic match in JaJuan Johnson*, who is quite similar to Basabe, only four inches taller, faster, stronger, and more skilled.

An under-appreciated part of Iowa’s success against Illinois and Ohio State was offensive rebounding, and that dried up too, unfortunately.  Iowa came up with a paltry 24% of their missed shots (compared to 40% against OSU).

And, oh yeah, did I mention another sharpshooter went nova on us?  Ryne Smith went 6-9 from three point land on his way to 18 points.  One guy getting hot from three is bad, but it happens.  When it happens five times**, it’s not a fluke, it’s a serious problem.

I don’t mean to be such a downer on this game, but there really wasn't much positive to see here.  We got to see lots of Devon Archie in garbage time, and he even had a nice dunk on the fast break (I’m sorry I compared him to a slow-moving prehistoric fish the other day -- the dude can move!), but that’s about it.  The good news is that we don’t have to play Purdue again for a while.  The bad news is that we do have to play Northwestern, Minnesota, and OSU in our next three games.

* Is anyone else bothered that JaJuan uses the letter "J" to make two different sounds in the same word?  Just me?