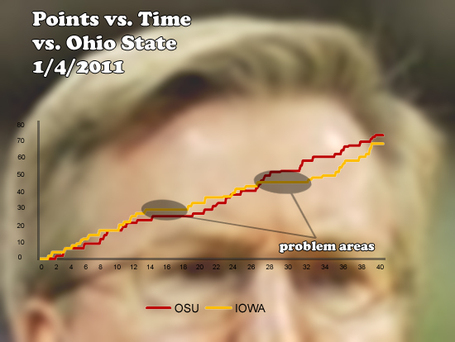 Another ranked team, another impressive Iowa performance.  Playing without Eric May, the Hawks led the #2 Ohio State Buckeyes for much of the first half and hung close with them down to the wire.  It was the Melsahn Basabe show throughout.  The freshman showed off his entire repertoire: step-back jumpers, dribble drives, blocks, rebounds, even a nifty crossover to avoid some pressure in the back-court.  He finished with 22 points, 13 rebounds (8 offensive!), six blocks, and finally seemed to shrug off the free throw jinx that has plagued Iowa all year, making 8 of 11 freebies.

Unfortunately it was also the Jared Sullinger show.  The highly touted freshman got position at will and finished with a variety of nifty flips and baby hooks on his way to 24 points.  The Hawks did some interesting things to frustrate Sullinger, like fronting him with one defender (usually Cole or Brommer) and then sending a second defender (usually Basabe) late to block his shot.  I think Basabe's length and quickness surprised Sullinger, as a few of his  shots were just wiped out at the rim.  And despite Sullinger's NBA-caliber, Moses-Malone-sized backside and the great position it afforded him all night, the likely lottery pick shot only 11-20, well below his 59.5% season field goal percentage.

The Hawks truly played well enough to knock off the Buckeyes for about 30 out of 40 minutes last night.  Those other 10 minutes, though... yeesh.  You can see on the graph two vast deserts of non-scoring by Iowa, and the one that really hurt the Hawks was the one starting in the second half around the 14 minute mark.  The Hawks went without a point for the next six minutes, during which time Ohio State stretched the lead to 13.  Iowa made a furious comeback down the stretch, even cutting the lead to 3 with 40 seconds left, but that cushion proved to be just enough for the Buckeyes to win the game.