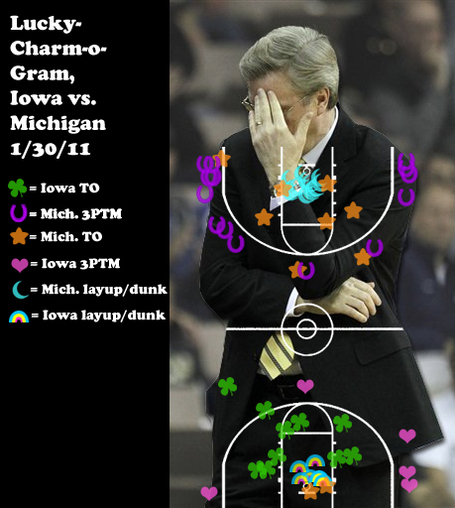 In men's basketball in the NCAA this year, players have made 34.5% of threes and 48.2% of twos.  The average value, then, of a three-point attempt is  3*.345 = 1.04, and the average of a two is 2*.482 = .964.  This fact has led many college (and pro) coaches to the reasonable conclusion that  three-point shots are better bets than two-point shots, and that their teams should take as many threes as possible (Todd Lickliter was one of these coaches, actually).

Not all twos are worth less than threes, though: shots at the rim are usually made at a very high percentage (60-70%) and thus the average dunk or lay-up is worth 1.2-1.4 points, much more than the average three.  Putting  these two facts together (threes are better than most twos, but dunks are better than threes), coaches have developed what could be called a "hollowing-out" strategy on offense: threes and dunks are encouraged, anything in between in discouraged (Stan Van Gundy in the NBA is a good example of an acolyte of the three-or-dunk philosophy; it helps that he has Dwight Howard to get the dunks and draw the defense from his shooters, of course).

Why go into all that statistical rigmarole?  Because one of the coaches who follows  the hollow-out-your-offense strategy most avowedly is John Beilein*, formerly of West Virginia, now of Michigan.  And Sunday, Beilein's team used the three-or-dunk strategy to absolutely carve us up: the Wolverines made 33 FGs, 14 of which were three-pointers, 10 of which were dunks or layups, and only 9 of which were in the undesirable no-man's-land in between.  You can see the hollowing-out pattern clearly on the Lucky-Charm-o-Gram above: lots of purple horseshoes on the perimeter, lots of blue crescent moons by the basket (I didn't track intermediate shots, as I was running out of marshmallows -- pots of gold, maybe?).  It was a perfectly executed Beilein game, and it helped Michigan win big, 87-73.

If Iowa could have turned just a few of those three-point attempts into two-point attempts, even if those two-point attempts were sure-thing layups, they might have had a chance to win the game (two is less than three after all).  Or, alternately, the Hawks could have hollowed out their own offense a little more: we had five threes, six makes at the rim, and 17 field goal makes somewhere in between; in other words, most of our shots were taken from the lowest percentage spots on the court.  We're not really set up now to be a Beilein-style team, though.  You really need three three-point aces on the court together to properly spread the floor, and usually we max out at two (Gatens and McCabe).  Cartwright, May and Marble can all shoot threes, but not do it for a living.

Anyway, even given Michigan's three-point barrage, the Hawks were within eight points with three minutes left.  As things stood, however, the Hawks simply allowed Michigan too many clean three-point looks, especially in the second half, when the Wolverines expanded their three-point halftime lead to as much as 21.  Darius Morris didn't make a single one of those 14 threes, but he was the beating heart of their offense, driving to the lane, drawing the defense, then whipping pinpoint passes to shooters on the perimeter.  Morris finished with a triple-double, with 12 points, 10 rebounds and 11 assists.  And he's only a sophomore.  Be scared.  Be very a-scared.

Iowa, for all their defensive shortcomings in the second half, really played well in the first half.  Melsahn Basabe was scoring seemingly at will in the paint (he finished with 25 points on 9-11 shooting), Bryce Cartwright ran the offense with poise, and the defense looked sharp and attentive.  That changed in the second half, of course.  I'm not sure if it was a switch to zone, or just bad rotations, but Michigan (mainly Zack Novak and Tim Hardaway Jr.) had all kinds of open looks at three in the second half, and converted.  Iowa made a brief run near the end of the game (aided by Michigan's odd decision to bypass open layups in favor of running 20 more seconds off the clock), but the game was basically over by the 10-minute mark in the second half.