It's Not Plagiarism If You're Linked With UConn

Share All sharing options for: It's Not Plagiarism If You're Linked With UConn 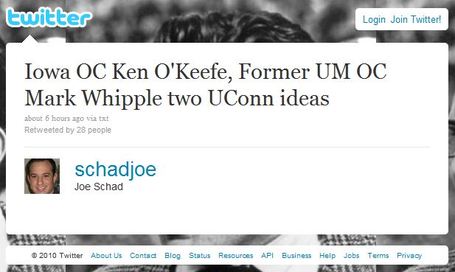 KOK RLY?  With Randy Edsall poised to take the vacant head coaching position at Maryland and Mike Haywood's legal troubles bringing his tenure to a close after just 17 days, idle speculation as to replacements at Connecticut and Pitt began in earnest last night.  One tweet from ESPN's Joe Schad is of particular interest; for the second time this offseason, Ken O'Keefe is being mentioned for a head coaching job.

Two things to keep in mind: First, this was sent before Edsall had even confirmed he was taking the Maryland job, and is almost certainly little more than Schad's idle speculation.  Second, this isn't the old UConn.  This is the defending champion of a BCS automatic qualifier.  But while KOK's resume never made a whole lot of sense to Indiana (where he was previously mentioned), it has a certain logic for Pitt and UConn.  He has Ferentz's ties to both programs (Ferentz played at Connecticut and started his college coaching career at Pittsburgh) and recruits Pennsylvania, New Jersey, and New England for Iowa.  He's had plenty of success finding talent in the region, too, especially at halfback.

With that said, the odds of O'Keefe leaving for either job looks unlikely.  It's not as if O'Keefe's offensive units have set the world on fire; since Joe Philbin left Iowa for Green Bay in 2002, Iowa has finished in the top five of the conference in scoring offense once.  While his head coaching record is impeccable (six playoff appearances and a national championship in eight years at Allegheny (PA) College), it's been thirteen years since he last led a program.  And he'll start next season at 58 years old, not exactly the prime age for a first-time Division I head coach.  Guys like longtime Penn State defensive coordinator Tom Bradley and former Boston College head coach Jeff Jagodzinski, also mentioned with both jobs, make more sense for both Pitt and UConn, and would certainly be interested.

Speaking of Twitter... Remember how Ferentz put a ban on those damnable social networks, consigning the technologically savvy and verbose to the virtual gulag this season?  Well, the season is over, and Twitter accounts are popping up this weekend for such departing players as Adrian Clayborn and, yes, Derrell Johnson-Koulianos (who posted a slightly touching story about Norm Parker on his account Saturday).  But man your battle stations and set the DEFCON to 2, Iowa fans: Shaun Prater is on Twitter, which in and of itself might seem innocuous, except that (at least to my knowledge) Ferentz hasn't reinstated Twitter privileges to current players over the offseason and (again, to my knowledge) no other current player has shown up on Twitter since the season ended.  Throw in a now-deleted tweet from @KinnickStadium wishing Prater "best of luck" on Saturday, and all hell broke loose.  This could be nothing -- for the sake of the defense, we hope it's nothing -- but Prater is draft eligible, with three years as a starting cornerback under his belt and a bit of disciplinary history (remember the rogue bartender who kept spiking his Diet Coke?), so it's not out of the question he's considering leaving early.

The Other Hoopyball.  It wasn't a good week for non-football, as men's basketball lost to Illinois in their Big Ten opener, wrestling finished fourth at Midlands, and women's hoops stumbled out of the gate in conference play.  After blowing a late lead in a loss at Penn State Thursday, the Hawks shot under 30% from the field while losing their conference home opener to Michigan yesterday.  Both games can be chalked up to big runs by the opposition; Penn State closed with a 20-4 streak to reverse a seven-point Iowa advantage, and Michigan started the second half with a 13-1 run that nullified the Hawks' halftime lead.  Iowa is now 12-3 (0-2) on the season.

Finally, Definitive Proof that Todd Lickliter Had To Go.  Except for His Win-Loss Record, Of Course.  Buried in a Steve Batterson piece about the current status of former Iowa basketball players who transferred to other programs during Todd Lickliter's tenure as head coach (and, frankly, the fact that there were enough transfers to justify a newspaper piece on this subject is strike one) is this nugget of information:

The former Hawkeyes walk-on is playing at Marian University in Indianapolis. The junior, who averaged 10.6 minutes during Big Ten play last season after Anthony Tucker’s departure, averages 6.4 minutes and 1.3 points, filling a reserve role in seven of the team’s first 11 games.

Now look, we liked John Lickliter.  He always seemed to us to be a good kid who wanted to play on the practice squad and help out his old man, and some of the jokes made at his expense during his time at Iowa were borderline cruel.  But J-Lick averaged 8.3 minutes per game for Iowa last year (and, as the column points out, more than 10 per game in conference play), which means he got more playing time for a Big Ten program than he's currently getting at D-III Marian University.  He was an emergency fill-in when defections made him necessary, to be sure, but as Fran McCaffery has shown with Bryce Cartwright, there are always JUCO options available late in the recruiting cycle.  Todd Lickliter's steadfast refusal to bring in a capable backup point guard at the expense of his son's playing time (mind you, I don't think that's what he was thinking, but it looked that way at first blush) became the final nail in the coffin.  The move had to be made.

Three Hawkeyes -- Ricky Stanzi, Adrian Clayborn, and Christian Ballard -- will play in the 2011 Senior Bowl.  It's an expected step for Stanzi and Ballard, who project as mid-to-lower round draft selections.  It's a little surprising, though, for Clayborn, who is still considered a first-round pick but may need to overcome his lackluster senior year to move any higher.

One of the expected contenders for every open coaching position in the upper Midwest, Michigan State offensive coordinator/interim head coach Don Treadwell, is taking the position vacated by Mike Haywood at Miami (OH).

Hot on the heels of news that third-string quarterback Kevin Newsome didn't make the bowl trip and is presumed to be gone, Penn State backup signalcaller Robert Bolden is also apparently transferring, leaving the Nittany Lions with walk-on gunslinger Matt McGloin as the only experienced returning quarterback.

And all credit goes to Julia Segal for the picture and the now-defunct Superpoop for the format, but Poker Cat bluffs at a pot at the World Series of Poker.