Share All sharing options for: It's Not Plagiarism If You Link To It Thinks It's Getting Drafty In Here

* This is our draftnik moment.  Adrian Clayborn may have opted out of the Senior Bowl, but Ricky Stanzi and Christian Ballard are still down in Mobile for the highest-profile of the multitude of senior all-star shindigs.  So how are they doing?  Well, that depends on who you ask... and when you ask.  Two days ago, the buzz on Stanzi was not good.  (Unless you were Todd McShay, that is. $$$)  The chatter about Ballard wasn't much better.  Yesterday, though, the news was a bit more positive.  Although not in everyone's estimation.  The nicest things about Stanzi came from the National Football Post's Wes Bunting:

Overall, he’s the one quarterback on the North roster who seems to always be in control of his surroundings, does a nice job of deciphering information quickly and has the kind of ball placement and arm strength needed to make him one of the more intriguing QB prospects in this year’s draft. Looks like a guy with starting potential at the next level that could be had for a bargain in the mid rounds. It’s been a very good week for Stanzi in Mobile.

So what do we take away from all this?  Your guess is as good as mine.  The ever-increasing popularity of the NFL draft and the ease of publishing on the interwebs makes it easy for everyone and their dog to call themselves "draft experts," so it's wise to take all this with a pretty heaping helping of salt.  The fact that so many observers can look at the same player doing the exact same things and come away with very different impressions is proof that these scouting events are probably nothing more than Rorschach tests featuring sweaty 22-year olds.  Still, it's certainly more fun to hear nice things about players like Stanzi and Ballard.

* You (haven't) lost that lovin' feeling.  Did you know Ed DeChellis and Fran McCaffery go way back?  Yeah, us neither.  But they were well-acquainted as assistants at Penn State and Notre Dame, respectively, in the '90s and friendly adversaries at East Tennessee State and UNC-Greensboro in the early '00s.  And like any good buddy movie, the Righteous Brothers played a key role in their friendship:

DeChellis, then a Penn State assistant, eventually shamed McCaffery into taking his wife to a Las Vegas show.

"Franny needed to do that,’ ’’ DeChellis said.

The McCafferys caught a Righteous Brothers show at Caesars Palace.

"Got the last two tickets,’’ McCaffery said. "Worst two seats in the house.’’

I always pegged Fran for more of a Steely Dan man, personally, but hey.

* Your recruit has dysentery.  Restart Recruiting Trail?  [Y/N]  The Franissance of Iowa hoops is only going to occur if Fran is able to hit a few home runs (hooray for mixed metaphors!) on the recruiting trail.  He got off to a solid start in his abbreviated start last year -- despite some inconsistency issues, Bryce Cartwright and Melsahn Basabe have already established themselves as being two of Iowa's five best players -- and he's still on the hunt this year.  In his sights?  A point guard and another big, ideally:

Judging by what we've seen this year... yeah, those are pretty big needs.  The main targets at point guard are Cezar Guerrero, Elijah Carter, and Shaquille Stokes, any of whom would seem to be a nice pick-up.  It's not as clear who the top non-PG targets are right now.  In any event, we certainly hope Fran is able to unearth a Basabe-esque diamond in the rough.

* Welcome to the Big Ten, Nebraska: take your shoes off and get comfortable.  Nebraska doesn't officially join the Big Ten ranks until July 1, but they're already hard at work integrating themselves with their new B1G friends.  By all accounts, this transition is going much more smoothly than the addition of Penn State in the early '90s (it probably helps that all eleven Big Ten schools voted in favor of adding them, as compared to the three Big Ten schools that said "thanks but no thanks" to Penn State back in the day).  In fact, Nebraska is even able to offer a few pointers:

"Really, it's these nuances of growing from an 11-team league to 12. ... The nice thing about having Nebraska in these discussions is they've been through the 12-team model. They can relate the pluses and minuses."

I'm not sure how helpful that advice is when it basically boils down to "Don't let Texas fuck you over again and again," but it's the thought that counts.

* As the ponytails turn.  While the men's hoopyballers started the week with their first win of Big Ten play, the women entered the week with three wins and their eyes on a run to the regular season Big Ten title.  This was the make-or-break week for them, with three games in seven days this week, starting with a game at Ohio State on Monday, followed by a home game with #9 Michigan State on Thursday, and finishing up with a road game at Illinois on Sunday.  Unfortunately, it didn't get off to a great start -- Iowa turned a 33-32 halftime lead into an 81-67 loss to the Buckeyes.  The second half was an unmitigated disaster for the Hawkeyes: they gave up 49 points on 72% shooting.  Yeesh.  That loss dropped them to 3-4 in Big Ten play and all but killed off their regular season title hopes.  Up next: a home game tonight against Michigan State, the best team in the league.  Good luck, ladies.

* No, not Gymkata.  In what is surely a BHGP first, we bring you news of... the women's gymnastic team.  Why?  Well, when a win sounds as big as this one, we figure it deserves some credit:

"It was great for us to prove that we can hang with a team like Michigan who is the best in the Big Ten and one of the best in the country," said Head Coach Larissa Libby. "My hat goes off to Michigan, they’re a superb team and they have been for years. We’ve been gunning for this team for a long time and to be able to get them at home is an incredible feeling."

* As expected, Brandon Wegher will have to sit out the 2011 season at Oklahoma.

* Apparently when we called jNW fans "a bunch of dirty whores" we were at least half-right -- according to the city of Evanston, hundreds of them are living in brothels.

* Things that are awesome: 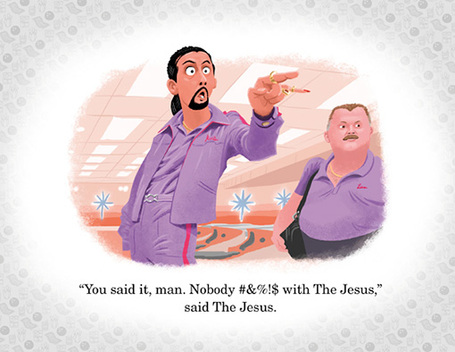 * And season two of Archer debuts on FX tonight (9pm CST).  Watch it or we can't be friends anymore.