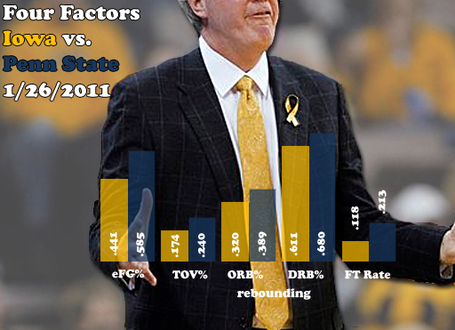 Full disclosure: I didn't catch the first half of the game (5:30 start time!  Come on, guys, some of us have things to do after work!), so I can't offer too much analysis about that.  Fuller disclosure: Iowa was ahead 30-29 when I started watching, then things swiftly went south.  And I fear I may have caused that somehow.

From what I did see, things went south for us in a big way on both offense and defense in the second half.  Iowa scored 23 points in the second half after scoring 28 in the first half, and gave up 36 points after giving up 29.  That equates to a 14 point loss, which, given the pace, is a pretty solid drubbing.  The four factors chart tells the sad story of why we lost: it wasn't turnovers (Penn State actually had more), it wasn't rebounding (Penn State did out-rebound us, but only by a little), and it wasn't really free throws (they made 10-11, we made 6-9).  No, it was shooting.  They shot a very good effective field goal percentage, we shot a pretty horrible one, and that was the game.  I'll leave it to you to fill in the gaps about the first half, but in the second half we looked lost on offense, and seemed to take forever to get lost, which only made things worse, given the pace.  When you're behind against a slow-down team like Penn State, contributing your own slowness is instant death.  Our only chance was to take shots quickly and hope they went in.  As things happened, Penn State was happy to let us take 30 off the shot clock, then take 30 off on their own, and bleed us out.  I actually wondered why Fran McCaffery didn't start fouling when we were down 7 with 2:57 left.  Penn State came out, ran 22 seconds off the clock, and wound up with a made jumper and foul by Talor Battle anyway.

Speaking of Battle, he was the star of the half I saw.  He got 13 of Penn State's 36 second half points, including some preposterous shots, like a three from about 28 feet and two nice and-one lay-ups.  He got wherever he wanted on anyone we threw at him (I mainly saw Bryce Cartwright cover him).  Cartwright could have done a better job, but that said, I don't know who else on our team who could have matched him one-on-one.  Maybe that's a sign we shouldn't have tried to guard him one-on-one?  It's tough, because he's a talented player, and we don't a strong inside presence to deter him from the rim.

And our offense, yeesh.  We only made 8 shots in the second half by my count.  Eight!  And five of them were threes.  Basically, if it wasn't coming from outside, it wasn't coming.  We had a second half eFG% of 42%, which is just godawful (the absolute worst shooting team in the country, number 345 of 345, averages an eFG% of 38.1%, so we were only slightly better than the horrific).

My impression all year has been that the Hawkeyes are an OK defensive team and an atrocious offensive team, and that certainly described them tonight.  And as a side note, the numbers back up that this is the kind of team we are: we're ranked 147th in offensive efficiency and 47th in defensive efficiency.  That defensive efficiency is really pretty good, especially given our size, but the offense?  Put it this way: the next worst offensive team in the Big 10 is Michigan, and they're ranked 69th.  We are on another level offensively, and that level includes teams like Weber St. and Towson.  If we could just find some scoring, we really could be ... well, average, but average sounds nice right about now.