POLL: What Will Happen To Iowa Football Next?

Share All sharing options for: POLL: What Will Happen To Iowa Football Next? 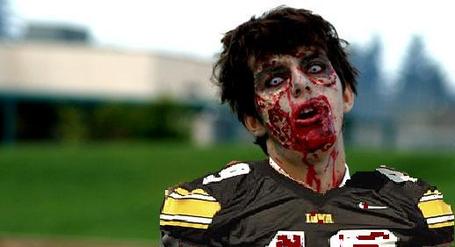 Just when you think there can't possibly be any more bad publicity* coming down the road for the Iowa football team, the college football gods spit in your face and give you the middle finger. The amount of shit to fall on this program in the last few months is staggering. Between Druggate, the loss of three running backs to transfers/dismissals, Cedric Everson's sexual assault trial, and now Rhabdomyolysisgate, there's been no shortage of weird and just plain bad news to hit the Iowa football program. Frankly, we were much happier talking about Ricky Stanzi's patriotism, Girls Generation, and HOCKEYBEAR.

But clearly Iowa has done something to rile up the college football gods (and not just our usual bogeyman, AIRBHG, either). So what's next?

* And, to be clear, we're certainly glad that it seems like all this latest episode is going to amount is another epic pile of bad P.R. for the university and the football team. By all accounts, the afflicted players are recovering and will be fine, which is certainly the most important thing.