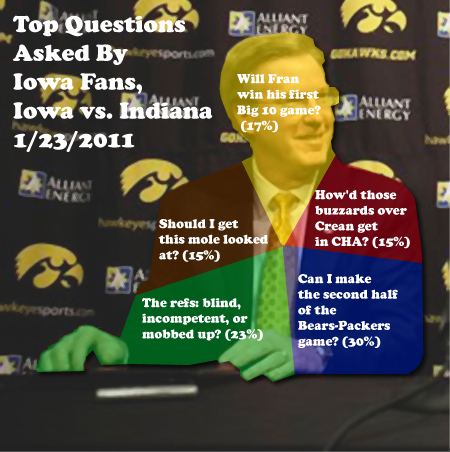 Yay! We won! That's novel!  I'm glad the Hawks won, but I have to say that long stretches of this game were not particularly impressive basketball on our part.  Iowa played lackadaisically for most of the first half and went into the locker room up 10 when they should have been up 20 or more.  Indiana was playing without Verdell Jones III and looked very depleted, but Iowa kept bailing them out with stupid fouls*, making mistakes on offense, and generally not putting the Hoosiers away.

* Iowa fell into a terrible habit of fouling 35 feet from the basket, when the man with the ball had approximately 0.0% chance of doing anything at all threatening with the ball.  Usually these were poorly executed traps, where Brommer or Cole or Basabe would let the guard get around their trap and then try to recover by sticking out their hip at the last second.  A lot of fans were booing the refs for these calls, but they looked like good calls to me.

When you combine Iowa's sloppiness with Indiana's general lack of ability, it got a bit farcical at times.  Indiana would make some elemental mistake, like triple-teaming one player, and then Iowa would respond with an equally elemental mistake, like not passing out of the triple team.  But then the second half started, Iowa started playing more alert defense, and Eric May started dunking all over everyone.  May had one near-dunk in the first half that would have brought the house down, but he made up for it by recording back-to-back epic throw-downs early in the second half.  On the first, May took a throw-ahead from Bryce Cartwright and finished with a nice Tom Chambers-style two-hand jam.  The second was even more impressive: May got the rebound, weaved in and out of traffic all the way up court and finished with one-hand.*

* Cole gave a key assist on the second dunk, doing the old running-screen-convoy on his man to open up the lane.

Matt Gatens and Melsahn Basabe played solid games, but the real surprise was Devyn Marble.  He played point guard a fair bit and looked uncomfortable (as usual) bringing the ball up the court, but once he got the ball in the half court, he managed to make a variety of sweet jump shots over his (usually shorter) Indiana defenders.  I don't see him as a point guard (and probably Fran doesn't either--we're just super thin there), but as a small forward, he has a knack for creating space for a pretty reliable jump-shot.

Anyway, we won!  And we should have won (we looked like the more talented team), and we did win.  Happy days.