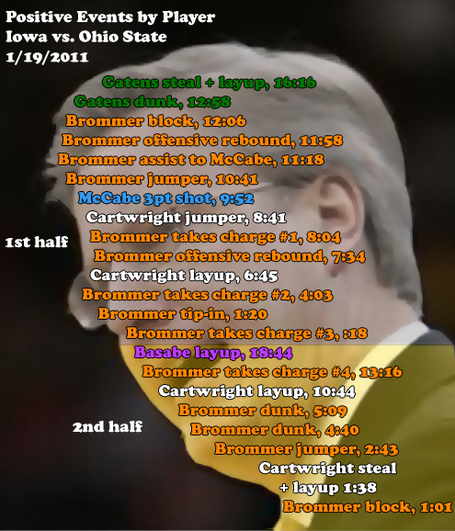 Yeah, this felt like the beat-down we deserved to get from Ohio State.  The Buckeyes are just more athletic and skilled at every position, and it showed tonight.  Even with a quiet night from Jared Sullinger (13 points), Ohio State got whatever it wanted on offense and frustrated Iowa on defense.  David Lighty was probably the man of the match for OSU, with 18 points on 5-7 shooting (2-2 from 3), 5 rebounds and 4 assists, but I was also impressed with freshman guard Aaron Craft.  Craft came off the bench to play the point, and while he didn't score much, his defense was stifling.  He wound up with 7 (!) steals and hounded Bryce Cartwright all night.

As far as positives for Iowa, hopefully the graph makes it clear who was doing things for the Hawks: Andrew Brommer.  Brommer was doing something right every time down the floor: taking charges (four in one game!), making nifty passes, getting steals, blocks, rebounds, dunks.  He was Jeff Foster-esque in the most positive sense of that made-up word.  It may be cold comfort for Iowa fans, but without Brommer, the Hawks could have lost by 30 or more.  He came in because Jarryd Cole was having foul trouble (and suffering from a bad case of Cole-itis), but he looked like the starter out there.  He caused Sullinger great annoyance with his activity and good positioning (he flopped a bit, too, but nothing too egregious), and his offense was pretty decent.  Brommer still gets single coverage, and surprises the hell out of people when he actually pulls off a sweet post move or jump shot.

This raises a serious question for Fran McCaffery: should Brommer be starting?  The stakes aren't high, and Fran probably doesn't want to bench Cole in his senior year, but Brommer has been playing at a higher level in his limited minutes.  He rebounds at about the same rate as Cole, has a more diverse offensive game (with surprisingly deft passing skills), is a better defender (IMHO), is taller, and has hands not made of New Hampshire granite.  I never thought I'd say this, but Free Andrew Brommer!