Share All sharing options for: Dinosaur Racecars: The Interview

Recently*, Jon Bois of "the Internet" interviewed me about Dinosaur Racecars because dinosaur racecars. Here is our interview so people can understand more about dinosaur racecars. There is no known picture of Mr. Bois on the Internet, so we'll use our old friend Bob Bruce to represent him. You're welcome for the nice hair, Mr. Bois.

Let's start with the basics. What is the IDRI, exactly?

Thank you, Mr. Bois. The IDRI stands for the International Dinosaur Racecar Intersociation.

Well, yes. America has always had a love affair with the noble dinosaur; look no further than the Jurassic Park trilogy, Denver the Last Dinosaur, and pop hit "Everybody Do the Dinosaur."

What the IDRI proposes is putting the dinosaurs in racecars.

We already have NASCAR, F1 racing, rally racing...the list goes on. Is there really a market for yet another motorsport?

It's not just "another motorsport;" it's an evolution, if you will, of all motorsport.

For example, you're a fan of natural science, yes?

Which includes geology, magnets, and the food chain

So, if Kyle Busch and a dinosaur had to fight each other because they were hungry and they wanted to get into the racecar, the dinosaur would certainly kill Busch and eat him as food, then use the racecar.

Now, we're not saying that Kyle Busch should be fed to a velociraptor or anything.

But certainly the dinosaur has a greater right to the racecar than a human.

Might makes right. I can respect that. But which dinosaurs are we talking about here? Is the triceratops welcome in the IDRI, or is this yet another elitist "T-Rex only" club?

The triceratops is more than welcome. Here, allow me to present a visual aid: 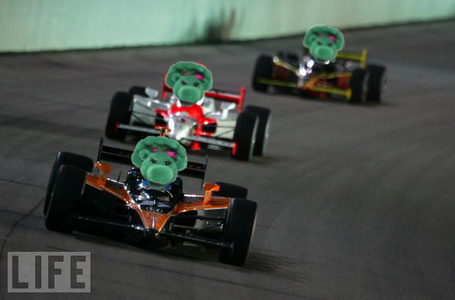 Further, dinosaur size is highly variable, so we're going to leave this all up to the individual dinosaurs as to how involved they want to be in IDRI. So they have to build the dinosaur racecar factories themselves, and work in them.

It's the only way to get the proper racecar for each dinosaur species.

The most outlandish, off-the-wall element of the IDRI seems to be that F1 cars can race alongside stock cars. Can this really work?

Absolutely. We've considered rally cars as well, but the herbivores would probably try to graze on the foliage at trackside in the middle of the race, and that seems like it would be more trouble than it's worth.

That's another question. Dinosaurs are animals. Can they really be motivated to sit in a car for hours on end? Do they care about winning? Do they realize what's going on?

Obviously, some education and obedience training has to take place before they can use dinosaur racecars, but that's the case for any sport or other venture involving animals.

Horsies aren't born racers, they have to be trained, and yet I don't see you trying to poke holes in horsie racing.

Please don't be naive. You know that as a journalist, these are questions I have to ask.

Give me a break. What newspapers have you ever written for, hey?

When I was five years old, my thirteen siblings and I produced a newspaper with newsprint and colored pencils. The Bois Family Time's [sic] boasted a circulation of 14 (15 when Father wasn't angry). Jeremiah served as lead editor.

Do I need to elaborate further?

No, no. Look, I'm sorry, I can't help but be defensive of dinosaur racecars. It's my passion. Let's get that ugliness behind us.

Agreed. I'm sorry about that little spat. Let's move on.

The 2010 IDRI circuit has been plagued with logistical failures, seeing as the Tyrannosaurus Rex is extinct. How is the IDRI responding to this challenge?

That was definitely a letdown, and when we went to the Jurassic Park place to get more Tyrannosaurus Rexes, they told us it was just computer animation and robots. I got to pet the robot and it was fun, but that didn't help our goal. Fortunately, IDRI is strong enough to survive without "The Great Dutch Beast," which I'm sure you know is the literal Greek translation of "Tyrannosaurus Rex."

For example, the velociraptor--commonly known to be the smartest of all dinosaurs, has already amassed a strong team of racecar drivers. Here's another visual aid as proof of that. 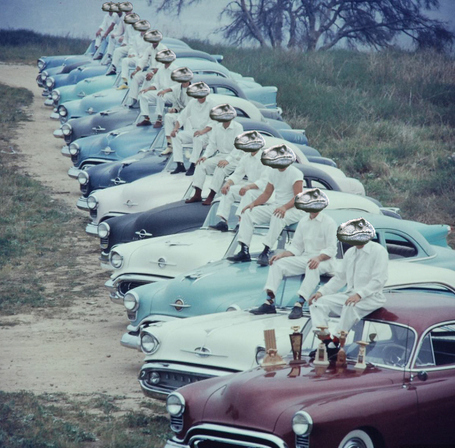 Those dinosaurs sure are handsome.

This picture is a "blast from the past"...in more ways than one!

Yes, I'm not sure why they chose a chassis that's at least 40 years old. Not their finest moment.

All of this still begs the question: why dinosaurs? To the outsider, this might appear to be little more than a publicity stunt. What does dinosaur motorsports offer that human motorsports don't?

I JUST TOLD YOU AMERICA LOVES DINOSAURS. It's like you're asking Burger King why they put hamburger meat in their hamburgers. IT'S BECAUSE IT'S HAMBURGERS. JEEZ.

I bet she also tells you what to eat, but that wouldn't stop me from giving you a knuckle sandwich if I were giving this interview in person!

Listen, I only have a couple more questions. Can we please get through them without getting nasty with each other?

You did. But let's move on. SB Nation's dinosaur racecar blog, Tyrannosaurus Wrecks, believes that the T-Rex named Teddy Higuera by his caretakers is the favorite to win the Pre-Cambrian 500. Would you care to predict a winner?

Teddy Higuera is a strong contender, as is Mr. Vroomlizard. My money's on Dinosaur X, who as we all know wears a mask and conceals his identity from other dinosaurs.

He has a reputation for being a real "sparkplug" (racecar term). Does the IDRI have any disciplinary measures in place?

Pretty much all you can do is shoot them if they act up. But fortunately discipline isn't an issue, mainly because dinosaur racecar drivers aren't susceptible to the lapses in discipline that human athletes have; their brains are too small for misbehavior.

We just try to make sure the more bloodthirsty ones stay away from the track, is all. By using guns.

Yes, but with dinosaurs. That's the catch.

Any final thoughts on the IDRI?

Yes, thank you for giving me the final word. Lots of people may think the International Dinosaur Racing Intersociation is some sort of joke or not worth a serious investment of their time and attention. My response is simple: go ahead and watch. When you see a dinosaur go flying 200 miles an hour down the track in his racecar, you'll understand why this league has to exist and why dinosaurs were meant to be in racecars. Dinosaur racecars.

Thanks for your time today, Mr. Jacobi.

Thank you, Mr. Bois. And I'm sorry about questioning your bona fides. You didn't deserve that.

You saved yourself a heap of trouble. The last time someone was cross with me, Father stalked the land looking for him, grasping a pitchfork in one hand and a body-sized burlap sack in the other. Father is eleven feet tall.