Share All sharing options for: It's Not Plagiarism If You Link To It Is Talking Comebacks (EDITED)

(Editor's note: I moved the A-Rob material to its own post because it deserves it and it's likely to swallow up any other conversation here.  So direct comments about A-Rob over yonder.)

How Eric May Got His Groove Back.  One of the few bright spots of Iowa's fifth-straight loss Sunday evening was the re-emergence of Eric May.  May had been so invisible in conference play that we were getting ready to start hanging posters around town asking if anyone knew of his whereabouts.  But he was back in a big way Sunday:

May, a 6-foot-5 guard/forward, scored 16 points, grabbed three rebounds, dished two assists and snagged two steals in Iowa’s 69-59 loss to the Gophers. The statistics don’t show how active May was on defense, which is what pleased Iowa Coach Fran McCaffery.

"I’m so happy for him," McCaffery said. "He’d been struggling. He’d been hurt. His confidence was shaken. I thought defensively when he’s up toward the ball, making deflections and stealing it and dunking it in the first half, that’s the kind of play we need him to make."

Hopefully May's newfound confidence carries over to the remainder of conference play because Iowa clearly needs all the help they can get (especially if the bench is going to contribute a whopping zero points, as they did against Minnesota).

No Soup for you, Big Blue.  There was some chatter about Iowa WR coach Erik "Soup" Campbell heading back to Michigan after Big Blue hired Brady Hoke as their new head man (Campbell and Hoke both worked on Lloyd Carr's staff for several years in the '90s).  Per a Michigan beat writer, though, that ain't happening: 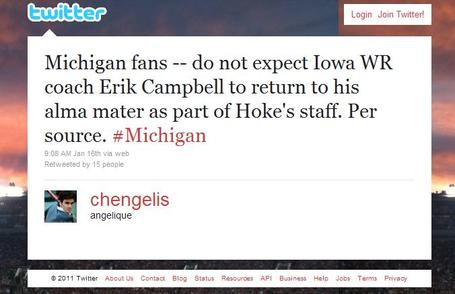 Needless to say, this is very good news, considering Soup is certainly Iowa's finest position coach on the offensive side of the ball and a key reason behind the development of DJK into Iowa's all-time leading receiver and McNutt transitioning from QB to all-conference WR in just a handful of seasons.  Let's hope he can work a little more magic with Keenan Davis (and a host of new faces) next year.

The Sooner we all move on, the better.  As reported last week, Brandon Wegher is transferring from Iowa to Oklahoma -- as a walk-on:

Before making a run at joining the Sooners, Wegher considered Northern Iowa, Kansas, South Dakota and others.

"I’m just looking forward to getting down to Norman (Okla.), start training and getting to classes," he said.

On the surface, one of those three schools doesn't seem like the others, but let's be honest: based on recent results, Kansas probably couldn't win the Missouri Valley.  But, in all seriousness, good luck to Wegher; it's a shame things didn't work out for him at Iowa because he displayed moments of brilliance in his freshman season (and it's always going to be a little bittersweet that his final play in an Iowa jersey was the game-clinching touchdown run against Georgia Tech), but shit happens.  Hopefully he rebounds from the personal issues that sidelined him this year (and the redshirt year he'll likely have to take next year; it's probably safe to disregard reports elsewhere that indicated he might be able to avoid the mandatory sit-out year that applies to transfer between I-A schools because he's walking on at Oklahoma; the NCAA guidelines don't seem to make any distinction between walk-ons and scholarship players in that regard) and has a nice career with the Sooners -- unless they wind up playing Iowa in a bowl game, of course.

Oh, and about all those rumors of what, exactly, his personal issues were?  Don't look for Wegher to confirm anything:

"I know the rumors that are out there, and I’m not looking to put a stop to any of them," Wegher said. "Things I went through are my personal issues, and they’re going to remain that way."

Time to move on.

Return of the Cougs?  We discussed the possibilty of Brennan Cougill's return a few weeks ago, but the Press-Citizen looked into the matter again last week, so it's probably worthy of an update:

Cougill described his recruitment as being wide open, but he also seems determined to make it back to the University of Iowa.

“It’s just sort of like doing the recruiting process all over again,” Cougill said. “Yeah, it’d be fun to be back at Iowa and just kind of build on the stuff I did my freshman year. Just showing everybody how I can play and my full game.”

Cougill is trying to expand his game by working on his post moves. He showed at Iowa that he can shoot from the perimeter by converting 18-of-50 3-point attempts as a freshman last season.

He now wants to add an inside game.

“On offense, I’m playing more down on the post, which is what I want to do, just incorporate a few different things here and there,” Cougill said. “That’s one part I’m trying to work on.”

Given how badly Iowa got mauled inside by Minnesota, we'll take any big body with a shred of talent.  Cougill wasn't much of an inside presence in his freshman year at Iowa, but it's unclear how much that had to do with his own shortcomings as a player and how much was a result of Lickliter's offensive system (not to mention some persistent back injuries that plagued the Cougillsaurus).  If Fran can land a better big man, so be it.  If not, well, there are likely worse options than Cougill -- especially if he's made genuine progress with his post moves and rebounding.

Win some, lose some.  It's been a herky-jerky conference season for the Iowa women's hoopsters; sometimes you lose on a buzzer-beater to the best team in the league and sometimes you smash your opponent by twenty points.  Their 20-point win over Indiana (one of the worst B10 squads, but hey) was a nice bounceback after the grueling loss to the Spartans and got Iowa back to .500 in conference play (3-3).  Iowa's hopes for a regular season conference title are hanging by a thread; unfortunately things don't get any easier next week (they're off for the duration of this week) since they get a pair of games against the Big Ten's other ranked teams: at Ohio State on 1/24 and home to Michigan State on 1/27.  To retain any realistic hope of winning the league, they probably need to sweep those games.  The schedule does ease up after that (five of their remaining eight games are against teams in the bottom five of the league), but it may all be for naught without a few wins next week.

* Iowa City was chosen to be the host of the 2012 U.S. Olympic Team Trials, the event to determine who will be representing the United States at the 2012 Olympic Games in London later that summer.  It's a nice honor and an eminently logical choice, given how wrestling-mad the Iowa City area is for wrestling.  If 6000 people will turn out to watch the Hawks maul SIU-Edwardsville, they should have no trouble getting strong crowds to watch America's finest battle it out.

* Two Hawkeyes (Marcus Coker and Micah Hyde) made ESPN's 2010 All-Bowl team for their superlative efforts; The Rittenberg recognized them plus a few others for his 2010 All-Big Ten Bowl team.

* Could Iowa have two first-round draft picks?  CNNSI thinks so.

* Did you know the Iowa Wesleyan coaching staff was the incubator for Hal Mumme (former Kentucky head coach), Mike Leach (former Texas Tech head coach and pirate of our dreams), and Dana Holgorsen (former Oklahoma State offensive coordinator and West Virginia head coach-in-waiting)?  No?  Well, read up on it.  And try not to cry too much when you think about Iowa running that godforsaken stretch play with A-Rob every other series.

* PROTIP: If you're being questioned by the police about being in possession of counterfeit $100 bills, it's probably not a great idea to admit that you got them at a drug deal earlier in the evening.

* Further proof that all Iowa State wants to do is squash your fun.  You can pry my PS3 controller out of my cold dead hands, you bastards.