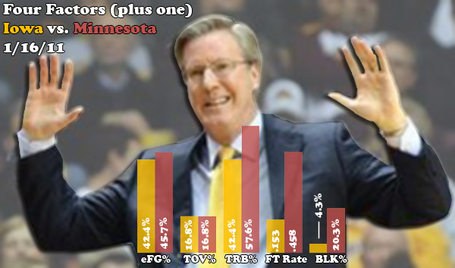 How you view this game will depend on what your standard for success is for this particular Hawkeye team.  If a win is a win is a win, and everything else is nothing, then this was yet another failure.  If progress counts for something, then this was a huge step forward.  Iowa played the Gophers very tough, and looked like a completely different team from the hapless group that folded in 10 minutes to Northwestern.  The Hawks played sound (man-to-man) defense, got timely offense from Eric May and Melsahn Basabe, and actually led the Gophers at the 14 minute mark in the second half thanks to pressure defense and several fast break points.  After that, Minnesota's size took over and proved too much for Iowa on both ends.  Trevor Mbakwe (a "bench" player due to his recent Facebook-related legal problems, although he played 35 minutes) dominated inside, with 16 points, 12 rebounds (four offensive), two steals and three blocks, and Ralph Sampson III stymied Iowa's offense again and again (7 blocks and almost as many shots changed).

The graph tells the story of the game (warning: nerd-out ahead).  Basketball stat guru Dean Oliver (no relation to Iowa's DeanO) has found that four factors most often determine the outcomes of games: effective field goal percentage, turnover percentage, rebound percentage, and free throw rate.  I listed those four factors plus one more I thought was relevant.  So where did Iowa lose this game?

So there you go.  Heading into next year, Iowa needs one thing more than anything: size.  A 6'7" center, no matter how hard he works, just can't compete in the Big Ten (and this is nothing against Cole, who does his best out of position).  A real center would make our zone better, improve our rebounding, help on offense, everything.

I know it's a dread word, but I'll say it: this was a moral victory for the Hawks.  Look, we're not making the NCAA tournament, we're not making the NIT, we're not even winning many Big 10 games, and we all knew that going into the year.  If you want to be fair to this team, you have to grade them by how well they meet their potential.  Against Purdue and Northwestern, Iowa played like they didn't care and looked like they didn't belong in the same gym.  Against Minnesota, they played so, so much harder, put a real scare in the Gophers, and could very well have won if a few things had broken differently.  On an inexperienced, short-handed and hodge-podge team like the 2010-11 Hawks, process, not outcome, is what counts, and the process looked miles better in this game.