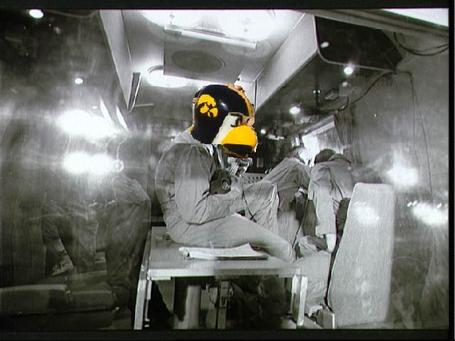 IOWA CITY, IA -- In light of recent events in the avian kingdom, the University of Iowa Athletics Department has decided to put beloved enjoyed tolerated mascot Herky the Hawk into quarantine.  University officials indicated that the decision was made to safeguard the health of both Herky and the UI student body, particularly the vulnerable athletes that come in close contact with Herky.  "Well, first and foremost we want to protect Herky's health.  I mean, the last thing you want is Herky dropping dead at mid-court.  That would be a little traumatic," claimed UI Athletic Director Gary Barta.  "Bad for ice cream sales, too.  And you don't screw with soft-serve: it was the second-best revenue stream we had when Lickliter was here.

"But then we have to think about the health and well-being of our athletes, too.  Have you seen our morbidity tables lately?  Half the women's basketball team is in and out of the orthopedic surgery wing at UIHC, we can't keep a point guard healthy if our lives depended on it, and don't even get me started about running backs or linebackers this year... In fact, come to think of it, maybe vengeful deities are the problem with this bird thing, too.  Hold on, I need to head over to Ames to find some virgins to sacrifice."

Calls to Herky to get his reaction to his impending quarantine went unreturned.  One of his handlers indicated that Herky was still grieving over the shocking deaths of his close friends, HokieBird of Virginia Tech, Sebastian the Ibis, and Big Jay of Kansas.  "He won't eat and won't drink.  He just sits in his room and says 'they're comin' for me next, they're comin' for me next.'  We tried to get him to tell us who 'they' were, but he wouldn't say.  He's just getting paranoid, too.  I mean, two of those deaths had nothing to do with these weird mass bird deaths.  Jim Harbaugh killed HokieBird with his bare hands for a victory feast after the Orange Bowl and Sebastian, well, I talked to a few buddies at Miami and they said he had a little nose candy problem." 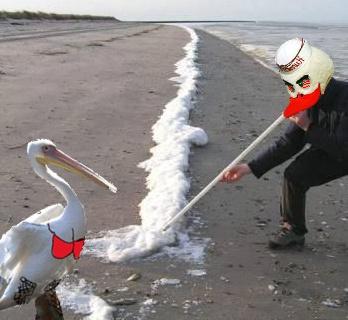 Officials at Iowa State said that they would have no need to undertake similar efforts since they didn't employ a bird as a mascot.  When it was pointed out that Cy actually was a giant bird, ISU Athletic Director Jamie Pollard sighed loudly.  "Well, yeah, if you want to get technical, I guess," said Pollard.  "Do you know how hard it is to anthropomorphize a tornado?"