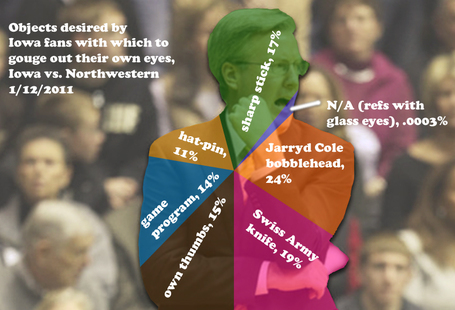 Well, that escalated quickly.  With Iowa playing its patented butter-soft zone to start the game, Northwestern jumped out to a 21-8 lead by the 12:28 mark in the first half thanks to 7-10 three-point shooting.  The Hawks looked frankly inept at defense, scrambling to locate shooters while somehow also leaving no one to box out for the rebound.  Not that Northwestern needed rebounds last night.  In the first half, they shot an eFG% of 81%, made 10 threes, and scored a whopping 48 points.  Coach McCaffery finally abandoned the zone with about 10 minutes left in the first half, but by that point the game was effectively over.  Man-to-man seemed to cause Northwestern a little bit more difficulty (although they did burn us on a few back-cuts for layups), but Northwestern was able to take their foot off the gas so early that you shouldn't read too much into the last 30 minutes of the game.

There's not much more to say.  Our offense was no great shakes once again, but it was the defense that allowed the game to get out of reach.  For whatever reason, zone is not something we do well.  Too often one of our defenders will rotate to follow a pass and forget that, oh yeah, the guy who passed it is still standing on the three-point line.