With the deadline to enter the NFL draft looming (January 15), we've been waiting to hear what three prominent Iowa juniors were going to do -- whether they would attempt to take the leap into the NFL or return to Iowa for one more year.  Well, one down: 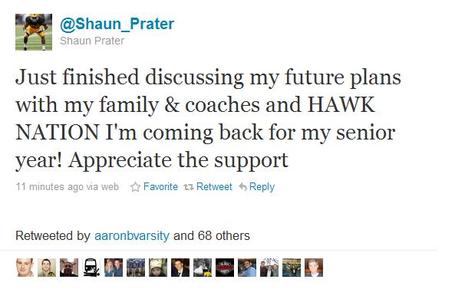 Prater always seemed fairly likely to return, since it wasn't like he had a breakout year the way some other recent Iowa corners had (Charles Godfrey, Bradley Fletcher, Amari Spievey) or established himself as a virtual lockdown corner (like, say, Spievey).  He was solid, but there was definitely room for improvement.  Now he'll have a chance to display that improvement in an Iowa uniform -- and possibly have that aforementioned breakout year.  Prater's return means that, barring the odd run-in with rogue bartenders or any other off-field tomfoolery, Iowa should return both starting corners from the current team.  Prater and Micah Hyde had issues at times this year, but they also made plenty of big plays (they combined for eight interceptions and scored three defensive touchdowns, including one rather clutch score a few weeks ago) and showed plenty of promise.  Considering that Iowa will be breaking in at least one new safety, it's nice to know that there should be some stability and continuity in the cornerback ranks.

But as we said: one down, two to go.  Now we wait for McNutt and Sash to make their decisions known.