It didn't make all the newscasts, but as anyone who watched the game on Saturday knows, we dropped a bomb on EIU around the end of the first quarter.  And in recognition of DAS PAKIBOMB going BOOM MOTHERFUCKER on the Eastern Illinois punter, the Big Ten has named him their Special Teams Player of the Week:

SPECIAL TEAMS:
Paki O’Meara, Iowa
SR, RB, Cedar Rapids, Iowa/Washington
O’Meara broke through for a blocked punt and returned it 42 yards for a touchdown in the first quarter against Eastern Illinois to give Iowa a 21-0 lead. The senior running back, who also rushed four times for 34 yards, recorded the Hawkeyes’ first blocked punt return for a score since teammate Adrian Clayborn accomplished the feat at Penn State last season.
LAST IOWA SPECIAL TEAMS POW: DE Adrian Clayborn on Sept. 27, 2009

In case you missed the play of the game:

We've long maintained that Paki is an excellent special teamer (he also blocked a punt against Wisconsin in 2008) and have applauded his efforts in that arena, so we're happy to see him getting some conference-wide love for his special teams skillz.  We just don't want to see him in the backfield, unless he's being used as a human victory cigar (a role he filled quite capably on Saturday, in fact).  So while the DAS PAKIBOMB Threat Level was raised to RED on Saturday... 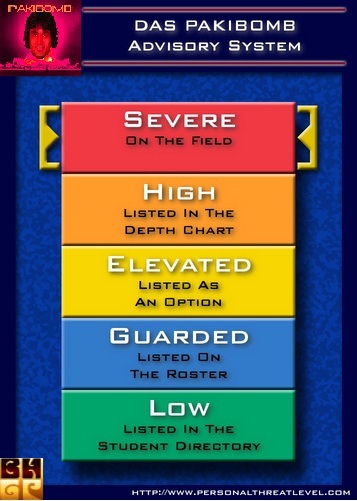 ... we anticipate dropping it back down to YELLOW once the new depth chart is released later today and Jewel Hampton has presumably replaced Paki on the rurnning back line.  But we'll continue to look forward to his sneak attacks on the special teams of opposing squads.