Share All sharing options for: A Winner Is You! 2010 Iowa Wrestling Preview: 197 lbs. 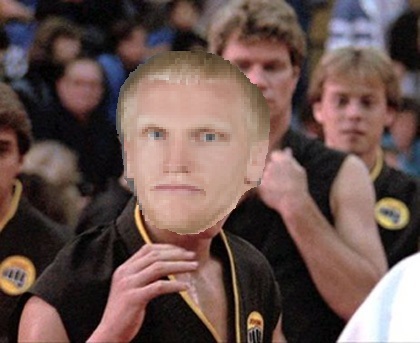 The Known Quantity
197 lbs. hasn't been one of Iowa's glamour weights for quite a while; Chad Beatty was one of the better stories in Iowa wrestling during his tenure, but he was rarely a serious title contender.  He began his run at 197 lbs. as an undersized guy filling a void on the roster; despite giving up considerable weight to most of his opponents, Beatty was a consummate battler.  By his senior year, he'd bulked up enough to negate any potential weight advantage from his opponents and his technique had improved enough to make him a top-ten wrestler at the weight.  With Beatty departed, the mantle at 197 lbs. falls to his frequent fill-in, Luke "The Leg" Lofthouse, one-half of our Stormin' Mormon tag team in the upper weights (the other half being Luke's nephew, Ethen Lofthouse, at 174 lbs.).

"The Leg" was so named for his propensity to get an opponent's leg, but have difficulty finishing the takedown; it was a pretty common theme in Lofthouse matches last year.  We kinda hope we can change his name this year to something more fearsome like "The Legbreaker," only without actual legbreaking since that would probably get him disqualified.  Anyway, a year ago Lofthouse went 20-13 overall, but just 7-8 in dual matches as he filled in for Beatty.  He went 0-6 against last year's NCAA All-Americans at 197, and many of those matches weren't terribly close (he lost 11-1 to Nebraska's Craig Brester, the national runner-up; 7-1 to Iowa State's Jake Varner, the national champion; and 6-1 and 7-0 to Minnesota's Sonny Yohn, who finished 8th), although he did record narrow defeats against Oklahoma State's Alan Gelogaev (3-2) and Wisconsin's Trevor Brandvold (4-2).  The hope is that another year's experience and the knowledge that he is the undisputed starter at this weight enables him to take the next step in terms of ability and actually be able to contend with the top guys in his division.

The Possible Options (We Don't Gots Many)
The only other wrestler on the roster listed at 197 lbs. is Brodie Ambrose, a junior with scant experience.  He accrued a 10-0 record last year, but that was while wrestling unattached and against much weaker competition (no offense to the wrestlers from Missouri Baptist and Waubonsee).  Suffice to say, we'd be a little nervous if something happens to Lofthouse and Ambrose is forced to step in.

The Potholes In The Road
Three of last year's top four finishers, including the national champion (Varner), the national runner-up (Brester), and the fourth-place finisher (Maryland's Hudson Taylor) are gone, which means the top of the division is wide open.  Unfortunately, there's no shortage of experience or talent among the guys that are returning.  The top guy in this year's preaseason rankings is Maryland's Cam Simaz, who finished third at last year's NCAA Tournament. He's joined by Brandvold, Yohn, Michigan's Anthony Biondo, Missouri's Brent Haynes, and Oklahoma State's Clayton Foster (the 6th place finisher at 184 a year ago).  George Mason's Cayle Byers, returning from a redshirt year, is also capable of making some noise in the division.  Lofthouse lost to Haynes a year ago (7-1), but did record a win over Biondo (9-6).  That single win represents his lone triumph over the guy's expected to be at the top of this year's division, which does not exactly inspire great confidence.

The Reasonable Expectation
As noted above, Lofthouse went 1-5 in '09-'10 against guys in this year's preseason top ten, so the track record isn't exactly all that encouraging.  On the other hand, like Beatty, Lofthouse was an undersized guy pressed into action out of need on a few occasions in the past; another year of training (and bulking up) really may have given him a boost. Beatty too had inauspicious beginnings at this weight, but he eventually developed into a legit top five/top ten-caliber competitor here and could very well have been an All-American in his senior year if not for a costly injury that robbed him of much of the season.  It's too soon to tell if Lofthouse will be able to duplicate those efforts in his senior season (with a better ending, hopefully), but it's not out of the realm of possibility.  Many of the top guys in this weight are in the Big Ten (Brandvold, Yohn, Biondo, Purdue's Logan Brown), so Lofthouse should get plenty of experience battling against the top guys before the NCAA Tournament even rolls around.  A top four finish at the Big Ten Tournament seems reasonable, coupled with an NCAA Tournament spot and a realistic outside shot at being a low All-American.