What do we need to do differently for Ball State?

Share All sharing options for: What do we need to do differently for Ball State?

It should be obvious that we need to make some changes for the upcoming game against the Ball State.......I just had to google their mascot........Cardinals.  Clearly there were some mistakes made last Saturday and if we want to get back on the right track, these mistakes need to be fixed.  I'm not talking about the play-calling, the special teams execution or the running game.  I'm talking about what you did.  Yeah, fucker, I'm talking to you.  What the holy hell did you do?  Did you wear your socks with the red stripes on them?  Were you drinking blended whiskey instead of your usual single malt?  Did you use a 2-in-1 shampoo and conditioner for the first time?  Well...whatever you did, you fucked up. 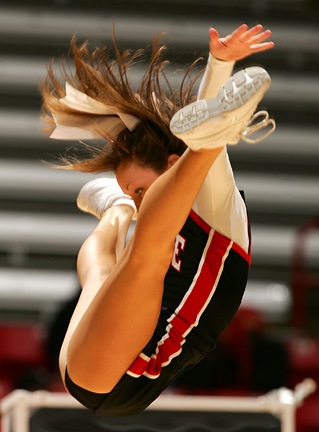 This is a Ball State cheerleader.  That's all I have to say about that.

But you know what? It was my fault too.  I've been replaying last Saturday over and over in my head and I know I need to make some adjustments for the upcoming game day.  Pretty sure if I make the following modifications this Saturday that the Hawks will get back in the W column:

As you can see I'm doing my part, so you need to do yours.  Seriously, let's not blow this again.  We're better than this.  Step your game up.  Please use the comment section to absolve yourself of last week's wrongdoings and tell us how you're going to make up for it this week.