A Winner Is You! 2010 Iowa Wrestling Preview: Heavyweight

Share All sharing options for: A Winner Is You! 2010 Iowa Wrestling Preview: Heavyweight 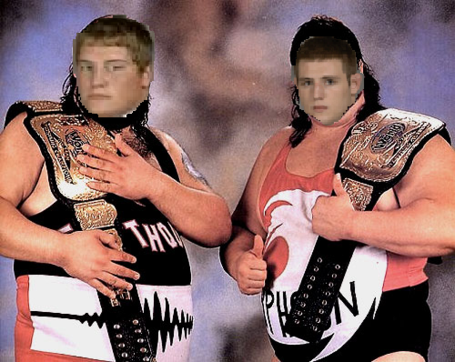 What do you mean, there isn't a tag team division in the NCAA Tournament?  Dammit.

The Known Quantities
How difficult is it to predict this year's Iowa line-up?  Our second entry in this series features a weight that's a virtual coin-flip between two guys.  We've gotten glimpses of our two options at heavyweight over the past two seasons as former starter and two-time NCAA All-American Dan Erekson missed time as a result of injuries (particularly last year when Erekson was out until mid-January with a torn pectoral muscle) and the results have been mixed to put it kindly.  Blake Rasing (JR) appears to be the slight favorite to win the starting spot and he did see more of the action a year ago when Brands was trying to find a body to replace Erekson.  Rasing went 18-9 overall (9-9 in collegiate matches), but just 1-5 in dual meets.  One of his few wins over top-level competition was a win over Michigan's Ben Apland (6-1); other than that Rasing's year followed a consistent pattern: beat up on lesser opposition and lose to other top-level guys.  The only saving grace there is that he had a number of close losses against said top guys, like a 1-point loss to Iowa State's David Zabriskie (last year's NCAA champ) as well as a two-point overtime loss to Zabriskie and a two-point loss to Oklahoma State's Jared Rosholt (last year's NCAA runner-up).  So the hope with Rasing is that another year of experience and training will enable him to turn those close losses into narrow wins this year.

Still, that's only going to matter if Rasing can beat out fellow junior, Jordan Johnson.  Johnson went 15-3 overall (10-2 in collegiate matches), but that record was padded with wins over lesser foes (no offense to the dudes from Lindenwood and North Carolina-Pembroke, but...).  All three of his losses came against teams from upper-level foes and, sadly, most of them weren't that close.  He was pinned by Rutgers' Dominick Russo in 1:24 and was handled by the aforementioned Zabriskie, 4-1.  His third loss was closer but perhaps even more relevant: he lost 3-2 to Rasing in the finals of the Grand View Open.  Wrestle-offs and head-to-head competition aren't necessarily the be-all, end-all, but if Johnson isn't doing better against high-level foes and can't beat Rasing, then it's tough to make a compelling case for him to be the starter.  Either way, prepare to say goodbye to seeing anything like Dan Erekson's exciting, attack-heavy style out of this weight; both Rasing and Johnson are more like the ponderous and dull heavyweights that typify the division.  C'est la vie.

The Possible Options (We Don't Really Gots 'Em)
Waiting in the wings behind Rasing and Johnson is Bobby Telford, one of the top recruits in the nation and a big part of Iowa's top-rated recruiting class last year.  As with pretty much all incoming freshmen under Brands, the obvious expectation is that Telford is going to redshirt, spend a year in the training room sparring with Rasing and Johnson, and bulk up in preparation for making a run at the starting spot in 2011-2012.  If disaster struck and both Rasing and Johnson went down with injury, Brands might throw Telford into the fray, particularly if he thought an inexperienced Telford was a better bet to get points at the Big Ten and NCAA Tournaments than an undersized guy.  Barring that, though, we're in watch and wait mode with young Mr. Telford.

The Potholes In The Road
The news here actually isn't too bleak: six of the top eight finishers from last year's NCAA Tournament have departed, including the last two national champions (Iowa State's David Zabriskie and Missouri's Mark Ellis) and national runners-up (Duke's Konrad Dudziak and Oklahoma State's Jared Rosholt).  So that's good news for Iowa's hopes of getting something out of this weight.  On the other hand, this weight isn't devoid of talent.  There are two returning All-Americans, third-place finisher Zach Rey of Lehigh and eighth-place finisher Jarod Trice of Central Michigan.  They're joined by Missouri's Dom Bradley (coming off a redshirt year and who may be even better than Ellis), a pair of talented Big Ten behemoths in Minnesota's Ben Berhow and Penn State's Cameron Wade, and a talented duo from Big East territory in Rutgers' Dominick Russo and West Virginia's Brandon Williams.  Oh, and there's also Oklahoma State's evil Russian, Alan Gelogaev, who finished 7th at 197 in last year's NCAA Tournament.  Many of the headliners from the last few NCAA Tournaments may be gone, but there's still enough depth in this weight class to make it tough sledding for Rasing or Johnson.

The Reasonable Expectation
Frankly, Johnson and Rasing have been so underwhelming when we've seen them in the past that it's tough to have a huge amount of confidence in them right now.  We hope that one or both of them will make the leap into becoming a reliable option at this weight, but there's plenty of reason to be concerned.  So saying that we expect a high-All America finish out of this weight would be the height of absurdity; there's simply no justification for a prediction like that beyond blind homerism or the hope that we're going to sneak Kurt Angle into an Iowa singlet this year and hope no one can tell the difference.

Honestly, getting an NCAA qualifier out of this weight would make us pretty happy and a win or two at the NCAA Tournament would be great; anything beyond that would be pure gravy.  But if neither of those two things happen, we still won't be terribly disappointed because we simply don't expect much out of heavyweight this year.  Heavyweight arrives this soon in the AWIY series not because we expect big things out of it (we certainly don't), but beause we have a pretty good idea what to expect out of this weight (whoever emerges as the starter); it's just that what we expect isn't that exciting.

Looking for previous entries in this series?  Click here.

Also: terrorist fits jabs aplenty to commenter twade70 for his assistance with this piece.