Share All sharing options for: A Winner Is You! 2010 Iowa Wrestling Preview: 125 lbs. 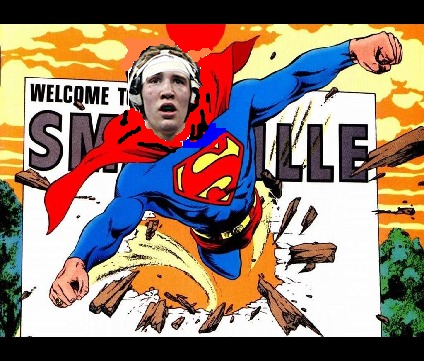 Super McDonough is coming to kick your ass.

The Known Quantity
A year ago, this was the second-to-last weight we profiled in this series; the only weight we were less sure about was 157 lbs.  Then a funny thing happened on the way to Iowa's third-straight national title: a gangly kid just up the road from Iowa City (Marion, IA) claimed the spot and proceeded to kick the holy hell out of almost everyone in his path and became the closest bet to a sure thing on the roster outside of Brent Metcalf and Jay Borschel.  Oh, and he won a national title, the first Iowa freshman to do so since Lincoln McIlravy in 1993.  So, yeah, Matt McDonough (SO) had a pretty good redshirt freshman year.

He went 37-1, his only loss coming at the hands of Angel Escobedo in the finals of the Big Ten Tournament.  He rebounded from that setback to tear through the NCAA Tournament, closing with his third win of the season over his primary rival, Iowa State's Andrew Long.  With the loss of Iowa's immensely talented (and simply immense: eight starters total) senior class, McDonough is going to be immediately thrust into a leadership role.  Stylistically, McDonough fits the mold of the prototypical Iowa wrestler almost as well as Metcalf: he's an incredibly attacking wrestler, with tremendous takedowns, stamina that can't be sapped, and a fierce desire to push for more points in a match.  McDonough quickly became a fan-favorite a year ago and there's little reason to think that will change over the next three years.

The Possible Options (We Gots 'Em)
Of course, one of the signs of the immense volatility in this series this year is the fact that even our so-called biggest "sure thing," the guy who's the returning national champion at 125 lbs. isn't exactly a surefire lock to compete at that weight this year.  It's sounding more and more likely that he will stay at 125, but it's not out of the question that he could move up to 133 lbs., which would pave the way for a few other guys to try and make some noise at 125 lbs.

Like most of Iowa's lower weights, there's a tremendous amount of depth, albeit not much in the way of experience. If McD does jump up a weight, redshirt freshman Tony Ramos is one of the best bets to try and fill his shoes at 125 lbs.  He was a decorated recruit coming out of high school, and while he was sidelined by a knee injury for part of last year, he still managed to 12-0 in unattached competition. The buzz on him has been strong, though, and he could certainly wedge his way into the lineup, either here or possibly at 133 lbs.  One guy who does have experience to go along with his talent is Tyler Clark (JR), a transfer from Iowa State (like Adam Haluska, he saw the error of his ways).  Two years ago, Clark went 25-8 and finished second at the Big 12 Tournament (though he also went a disappointing 1-2 at the NCAA Tournament that year); while redshirting, Clark compiled a record of 7-2 at 133 lbs.  The other main option at 125 is J.J. Krutsinger, who filled in for an injured Charlie Falck a few times in 2008-2009 and went 12-8 overall (1-4 in duals) and 14-4 in 2009-2010.  Unless he's improved tremendously, it would be a surprise to see him move past Ramos and Clark on the depth chart.  Finally, Matt Gurule and Charlie Joseph are incoming freshmen; with the talent that's ahead of them, they're a lock to redshirt.

The Potholes In The Road
Six of the top eight finishers at last year's NCAA Tournament are expected to return in 2010-2011 -- basically everyone but Indiana's Escobedo and Cornell's Troy Nickerson, the two preseason favorites a year ago who finished third and fourth respectively.  The good news is that McDonough faced all of the other guys a year ago -- except Arizona State's amazing Anthony Robles, the one-legged guy -- and did quite well.  He defeated Long three times (13-7, 9-7, 3-1), Minnesota's Zach Sanders three times (6-4, 13-2, 8-0), Purdue's Cashe Quiroga twice (fall - 2:13, 14-3), and Ohio State's Nikko Triggas once (9-1).  Additional wins over those guys are in no way guaranteed (particularly Long*, who wrestled McDonough very tight a year ago), but it has to give McDonough a great deal of confidence to know that he's faced them before -- and throttled them in many cases.

The Reasonable Expectation
Not to in any way discredit McDonough's fantastic achievement in winning a national championship as a freshman -- that's hard to do no matter who you're facing and all you can do is wrestle the guy who steps on the mat with you -- but we'd be remiss if we didn't point out that there was also an element of good fortune in McDonough's coronation a year ago.  Upsets knocked out not just Escobedo, Nickerson, and Robles, but also all of the other seeded wrestlers on McDonough's half of the draw; he didn't face a single seeded wrestler until Long (#5) in the finals.  So, yes, he did very well... but he also caught a few breaks along the way.

That said, his track record over the course of the season is a pretty good indicator that his title wasn't a fluke: as noted above, he wrestled most of the other top finishers at the NCAA Tournament -- and dominated them, by and large.  He has the ability and the mindset to do it all again this year, too; there were plenty of stories about him that described him as one of the hardest workers on the team and that his example was already motivating other guys to work harder.  He doesn't seem like the type of guy to rest on his laurels.  Projecting a championship victory is always hard since anything can happen in one match (just ask Metcalf about the NCAA finals two years ago or the Big Ten finals last year), but there's no reason that McDonough shouldn't be in the thick of things, either: anything less than another trip to the semifinals would be pretty disappointing and another trip to the finals seems like a good possibility (and for Iowa to have a shot at making it four consecutive national titles, we probably need him to make it back to the finals).

Looking for past installments in the A Winner Is You! series?  MAKE WITH THE CLICKY