Big Ten Media Days: In Which Nothing Is Surprising

Share All sharing options for: Big Ten Media Days: In Which Nothing Is Surprising

Not Surprising: Adrian Clayborn wasn't implying that ISU and UNI don't exist or whatever. It's not fair to call last month's OMG CONTROVERSY a "misquote," since the words "I mean we're the only team in the state, as far as I know" did come out of Adrian Clayborn's mouth, in that order. But any reasonable assessment of that situation would tell you that Clayborn was referring to Iowa merely being the most high-profile college team in a state without professional teams. Indeed, Clayborn was asked again about That Quote, and lo and behold:

"If you look back at the history, we barely beat UNI last year, so we can't disrespect that program," Iowa's All-Big Ten defensive end offered Monday as the curtain fell on the first session of Big Ten football media days. "We were two field goals away from walking back into the locker room crying after our first loss.

"And Iowa State, we've barely been beating those guys, aside from last year. But I think the series is (even) with them since I've been here. There's no disrespect to those programs. They're great programs. If I could answer the question again, I would."

Not Surprising: Sean Keeler doesn't accept that as an answer. It's obvious he wouldn't, since Keeler is a truly terrible hack of a writer, and is not willing to discard a manufactured storyline a full month before the game in question.

But come on. If Clayborn really meant the original statement in a boastful manner, then Kirk Ferentz would have been much more likely to kick him off the team than send him to freaking Media Days; after all, not even DJK has said anything half as incendiary as what Keeler wishes Clayborn meant, and DJK has snipers trained on him every time he speaks to a member of the press. The Tigerhawk-branded sniper rifles are $6,999.95, by the way, and available at your local Scheel's.

Not Surprising: Tate Forcier isn't exactly a Michigan Man. It's bad when one of a team's three representatives at Media Days absolutely buries his own returning starting quarterback, right?

According to [senior Michigan cornerback Troy Woolfolk], what was once a neck-and-neck race between Forcier and Robinson for the starting quarterback job has begun to tip in Robinson's favor. And a big reason for that, Woolfolk said, is the team's perception of players who don't show up to voluntary workouts.

"I personally have a lack of respect for them," Woolfolk said. "The outlook on them is kind of diseased. Like you don't want to be hanging around those people because they have bad work ethic. But at the same time, it's my role to try to persuade them to come out more."

According to Woolfolk, Forcier hasn't shown up to as many workouts as him and the other seniors feel he should have, and Woolfolk said it's hurting his teammates' perception of their signal caller.

"The only reason he's not really labeled as diseased is because of the way he was able to carry the team last year before we started losing. People still trust him a little bit, but he's starting to lose that trust."

Not Surprising: Tom Osborne wants his team to play the only Big Ten team in a neighboring state. Seriously, what's (the ferociously dapper) Dr. Tom going to say? "Ugh, we just got out of a division with ISU, maybe it's too soon for us and the Hawkeyes"? C'mon.

Not Surprising: Karl Klug is down to earth and focusing on one thing at a time. ESPN's not embedding video, because clearly the last thing they need is to draw attention to Rittenberg's efforts at Media Days, but this interview with Karl Klug is like the most Ferentz intervew any Hawkeye has ever given. Slightly paraphrased: "Talk about your third game of the season." "No because it is not the first."

Not Surprising: Via Marc Morehouse, BHGP is taking over the world, one Media Days at a time. 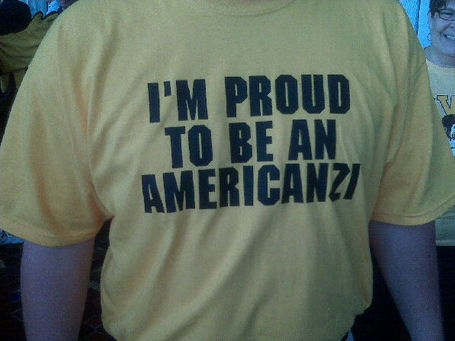