No Need To Play The Season; WhatIf Sports Did It For Us

Share All sharing options for: No Need To Play The Season; WhatIf Sports Did It For Us

Remember our good buddies at WhatIf Sports?  The folks who projected Iowa to win the Orange Bowl, 80-17?  Hey, don't laugh, they weren't that far off -- take away the STANZIBALL and the DJK injury, mix in some more aggressive playcalling and replace Ferentz with an absolute asshole of a head coach and... oh, who are we kidding.  Georgia Tech wasn't scoring 17 on that defense.

Anyway, WhatIf Sports is back with projected final standings for the 2010 season, so let's see what their fancy computers have to say about Iowa. 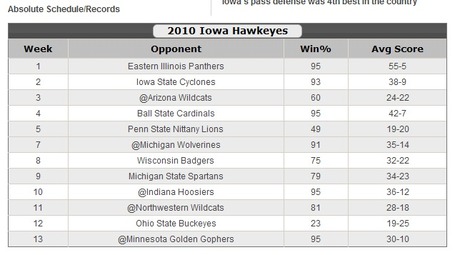 That's their Absolute Record; for their Expected Record, they went with 9-3/6-2 for Iowa, presumably slotting them losses against Arizona, Penn State, and Ohio State.   The difference between the Absolute Record and the Expected Record is explained here (which also has team-by-team breakdowns for the rest of the Big Ten).

Nothing there seems too unrealistic (well, aside from Minnesota's average points per game against Iowa being anything other than "0"), although Iowa having winning percentages of greater than 80% for Iowa State and Northwestern is pretty comical, given the recent results in those series.  WhatIf Sports' mighty death machines clearly have far more regard for Penn State than Wisconsin, too, which makes us suspect that JoePa isn't quite the technophobe he purports to be.

The best little detail?  Iowa State's average points per game against Iowa: 9 points.  Even the WhatIf Sports computers don't think Iowa State will score their first touchdown against Iowa since 2006.  (Fine, they could get a TD and a safety, if you want to be pedantic about it, and clearly you do.  Dick.)

By far the most goddamn hilarious part of their Big Ten preview, though?  Gotta be Minnesota: 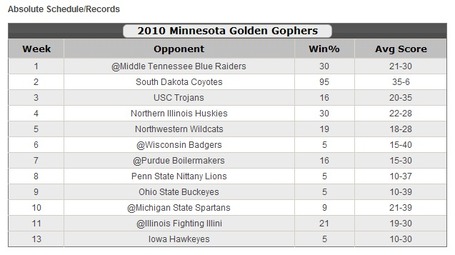 No other Big Ten squad has that many games with  winning percentages under 10% (even Indiana only has three games in that category).  If WhatIf Sports is right, we won't be seeing much GO FIGHT WIN around the Twin Cities this fall.