My Dinner With Angry Iowa Running Back Hating God

Share All sharing options for: My Dinner With Angry Iowa Running Back Hating God

Thanks for agreeing to sit down and talk with us, oh vengeful one.

Certainly.  After all the shit I've pulled, it's probably the least I can do for you tortured losers.

So.  Don't you think this is getting out of hand?

Oh, don't play coy.  The whole "fucking with the running backs" thing.  We're barely two weeks into training camp and one of the top three guys has up and vanished, leaving behind of a hornet's nest of crazy rumors.  I mean, for a few hours last Tuesday we were sure Wegher was headed to Guatemala to have a back alley abortion for his lizard baby.

Well, then we put the caps back on the scratch-n-sniff markers.

But seriously.  Little more than a week into fall practice and one of the top guys has disappeared, another one is suspended, the third one might be dinged up and one of the stud incoming prospects breaks his collarbone hurts his shoulder.  What the fuck?

Yea, verily, that was an error.  I meant to smite Johnson.

Oh, come on!  It's not bad enough that he tore his ACL less than a year ago and he's still rehabbing from that injury?

Bah!  You can't bring in a running back who's already hurt and not expect me to mess with him.  That's like tossing a full slab of ribs in front of a hungry lion and telling him not to eat.

Did you just compare DeAndre Johnson to a slab of ribs?

Yes.  Big, fat, juicy ribs, smoked just right so they fall off the bone.  With a delightful dry rub.  Mmm.

...uh-huh.  So should we assume that it's just a matter of time before you strike down Johnson?

I was thinking he'd have a horrible accident involving a threshing machine.

Indeed.  I was going to go with a riding lawnmower, but then Mad Men had to go and steal my thunder...

Right.  You realize threshing machines are like fucking antiques, right?  Why not have him get mauled by a cotton gin?

That would just be stupid.  Who grows cotton in Iowa?

We don't really grow wheat, either, you know.

Fine, fine.  I'll have him get mangled in a tragic accident involving a combine and some moonshine.  Happy now?

Goddammit.  But, really, what's your fucking deal?  Are we still dealing with karmic payback for Shonn Greene's ridiculous season in 2008?

Karma?  You're barking up the wrong theology with that nonsense.  I'm Old Testament to the bone.

So we should expect one of our running backs to fall prey to a swarm of locusts?

Awesome.  Can't wait until you turn one of them into a pillar of salt.

Did that already.  You played that Brownlee kid anyway.

Look, it was 2004, I was bored, and Iowa had four straight years with a 1000 yard rusher -- it was getting nauseating.  I tried to hold Betts back with those awful offensive lines, but then they had to actually get good.  So I had him get hurt in pre-game warm-ups before his one and only bowl appearance.

You really are a dick.

Yea, verily.  So anyway, then I had his replacement, that Greving kid, quit like two games into the season the next year and I figured for sure that would derail things.  But NOOOOOOO you guys just plug in a midget like Fred Russell and everything's just fine.

Yeah, that was pretty awesome.

Nothing I could do to stop that midget would slow him down for long, so I just went after the big-time recruits like Lewis and Young.  I really screwed up that Lewis kid's career but good.

OK, so the history lesson is nice, but there's really just one more burning question.

Why do you always spare Paki?

Look, I may be a capricious, nigh-omnipotent being lacking much in the way of a moral code... but even I won't fuck with DAS PAKIBOMB. 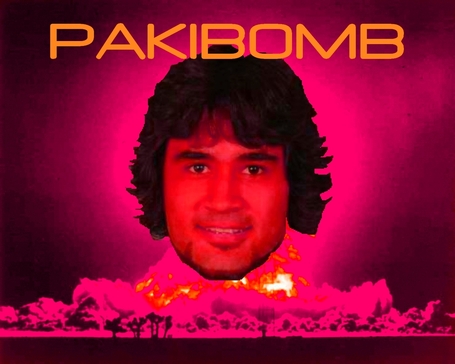