Preseason BlogpLOL: The Search for Schlock

Share All sharing options for: Preseason BlogpLOL: The Search for Schlock 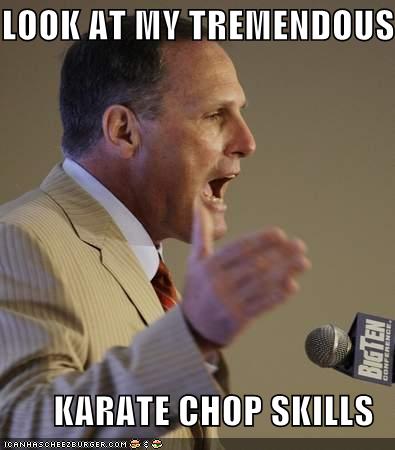 I'm not going to say we changed the world last year with the BlogpLOL; for one, I'm almost certain no other site has taken up the cause and adopted our method of resume ranking.  But it caused some debate, and it exposed some flaws in the polling system, both in the Blogpoll and those other polls that actually matter.  We never had a chance to write up our final top 25, so without further ado, a quick glance back to where we agreed with the voters and where we didn't.

The knock on our early polling was that it created ridiculous ballots; the response to that outrage was that eventually, we should all see the same results.  For the most part, that is exactly what happened, and it happened with a week to spare.  The final BHGPoll had the same top 10 as the final Blogpoll at large.  In fact, shockingly, after routinely winning Mr. Manic-Depressive for wild swings in the poll, we picked up Mr. Stubborn in the last poll of the season by a huge margin.  This was not because we were actually stubborn, but because the poll was an amazingly accurate predictor of bowl season.  Unlike many of our brethren, we had Ohio State three spots ahead of Oregon before the Rose Bowl.  We had Penn State eight places higher than LSU.  We had Iowa over Georgia Tech.  It is the triumph of the BHGPoll that on-field performance, when objectively observed, trumped preconceived notions about the strength of the Big Ten in general or teams like Pittsburgh and LSU in particular.

We're adjusting this year ever so slightly.  In particular, we are changing the formula to factor in performance on the road.  We're currently working with a team of actuaries (no, I'm not kidding) on how to best factor in the number of games played, which could remove some of the wild swings we saw last season from Pac-10 and Big East teams that take early bye weeks and play games into December.  But the guts of the poll will remain mostly intact:  Losses are exponentially more important as they accrue.  Quality of opposition is just as important as quantity of points, and that calculation is based solely on what that opposition has done to date.  Strength of schedule trumps all.

As for the preseason poll, it's a shot in the dark.  We have no idea if Alabama can replace all those starters on defense, but it's Nick Saban and a boatload of talent, so we'll cast our lot with him.  We're worried about the quarterback situations at Oklahoma, Texas, Florida, and even Ohio State (well, at least one of us is worried about OSU).  Wisconsin at #3 is absurdly high to most, but there is a lot to like about this Badger squad: Veteran line, possibly the best quarterback of the Bielema era in Scott Tolzien, John Clay and Monte Ball running up the gut.  If they have any semblance of a defense (and I'm certainly not yet sold on Bielema's ability to build one from scratch just yet), they could very well win the Big Ten.  We like Miami mostly because they're Miami.  If North Carolina can stay off the NCAA scanner, they have enough talent (especially on defense) to win the ACC and contend on the bigger stage.  We don't understand the love for Nebraska or the lack of it for Washington.  And Middle Tennessee State goes in simply as a good luck wish for when the Blue Raiders open the season as 4-point favorites at home over Minnesota.  Yes, you read that correctly.

Iowa at #7, where they ended last season, feels proper.  Until we've seen the new offensive line in action, there have to be questions about the Hawkeyes' ability to move the ball, and defense can only do so much.  With that said, if we're even close to correct in this poll (and I'll save you the suspense: We aren't), a strong start would have Iowa right at the top; there are few tougher schedules in the country than a Big Ten slate free of Illinois and Purdue, coupled with a non-conference date in the desert in the dead of night.    For now, it's all speculation, and it's all thrown out the window the second the ball is kicked.  Long live BlogpLOL.