The off-season is a long and tiresome trudge, so how can we best get through it?  By looking ahead to next year, of course.  So, in the spirit of forward thinking, we present a team-by-team look at Iowa's 2010 football opponents (with looks at Illinois and Purdue thrown in for good measure so our Big Televen brethren don't feel ignored).  Next up: SPARTY NOOOO!

Where the devil do they play?  In the perfectly acceptable -- and perfectly unremarkable -- Spartan Stadium.

What did they do last year?  Fresh off their best season in almost a decade (9-4 overall, complete with a Capital One Bowl trip), Michigan State backslid to a 6-7 mark a year ago, concluding the season with an Alamo Bowl loss to a Mike Leach-less Texas Tech.  (In fairness, the Spartans were also down a handful of players, thanks to a little old dorm brawl scandal.)  MSU entered the season mired in a QB controversy between Kirk Cousins and Keith Nichol, a controversy that wasn't settled for a handful of weeks, which may have cost the Spartans a game or two in the season's early going (a story which should be all too familiar to Iowa fans who remember 2008).  After a season-opening massacre of Montana State, MSU dropped a pair of heartbreakers to Central Michigan and Notre Dame (plus a not-as-close-as-it-looks game to Wisconsin), then salvaged their season with an OT win over Michigan and a pair of wins over the Big Ten's contingent from the land of Lincoln.

That brief resurgence ended after a ridiculously hard-hitting night game with Iowa left them with another heartbreaking loss, this time courtesy of "7 got 6."  The hangover from that loss spilled over to the following week, when the Spartan defense did the unthinkable: made Adam Weber look like all an all-Big Ten QB.  They bounced back with their requisite MACrificial lamb (Western Michigan) and a wild shootout win over Purdue, then got stomped into the turf yet again by Penn State and lost a defense-free shootout to Texas Tech in the aforementioned Alamo Bowl.

So do they have, like, history with Iowa?  Iowa and Michigan State have been regular opponents since Sparty joined the Big Ten in 1953 and the rivalry has been remarkably even: Iowa holds a narrow 21-18-2 edge and no team has won more than three in a row in the series since Iowa rattled off five straight wins from 1979-1983.  The parity is even more pronounced when looking at the final scores: 14 of the last 20 games in the series have been decided by a touchdown or less.  Over the years these have been two very evenly matched teams.  Still, despite the highly competitive nature of the rivalry, this hasn't been a rivalry marked by animosity.

What's the one thing you should know about Michigan State?  This was the mug they sold at the Iowa-MSU football game last year: 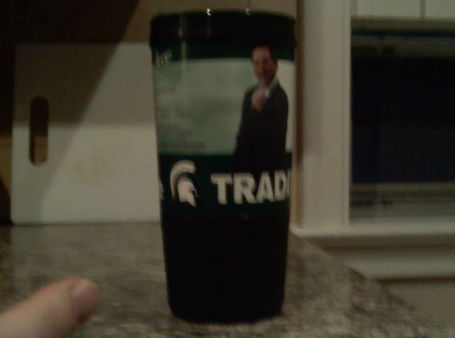 Yeah, they're a basketball school.

How many of these fools were around a year ago?  Per Phil Steele, 14 total: 7 on offense, 6 on defense, plus the punter.

God only knows what MSU and its fans would do without the movie "300."

What should we expect when Michigan State has the ball?  Offensively, Michigan State looks a lot like Iowa: lots of experience and talent at the skill positions and a lot of question marks on the offensive line.  A year ago, MSU went into the season trying to decide between Kirk Cousins and Keith Nichol at QB; Cousins ultimately won the battle and produced solid numbers: 198/328, 2680 yards, 19 TD/9 INT.  After a few years of pounding away with Javon Ringer and throwing only when necessary with the middling Brian Hoyer, MSU transitioned to an offense that didn't treat the passing game as an option of last resort.  The changeover was in full effect last year: after two years of running the ball at least 100 times more than they threw it (580 carries to 393 pass attempts in 2007, 511 carries to 399 pass attempts in 2008), they were almost perfectly balanced in 2009 (419 carries, 423 pass attempts).  And with Nichol transitioning to WR, the QB position is the sole province of Cousins.  His listed back-ups are a pair of freshmen, redshirt frosh Andrew Maxwell and true frosh Joe Boisture (and if some enterprising MSU site isn't printing up I'M MOIST FOR BOIST(URE) shirts already, I'll eat my digital hat), so this is certainly Cousins' team for the forseeable future.

After running the ball like it was the 1970s all over again for a few years, Michigan State dialed things back considerably in 2009.  Part of that was because they lacked running backs who could be as productive or as hard-working as backs like Javon Ringer or Jahuu Caulcrick.  A reminder: Ringer ran the ball 390 times in 2008; that's an almost obscene number of carries in the NFL and they play a goddamn 16-game season.  Even Dave Wanntstedt think that many carries is a little excessive.  Needless to say, they didn't come anywhere close to giving one back that much work in '09.  Larry Caper (120-468-6) and Edwin Baker (85-427-1) split carries a year ago as true freshmen and seem on pace to do so again this year.  Caper is the bigger back (5'11", 220 lbs. to Baker's 5'9", 199 lbs.) so if a workhorse does emerge, odds are that he'll be one lugging the rock.  Still, Baker was busier and more productive when he entered the mix in the second half of the season a year ago, so handicapping this race is not easy.  Either way, with another year's experience, both figure to be more productive and dangerous backs this year.

The good news for the Spartans is that they return five of their top six pass-catchers from 2009.  The bad news is that they lose their most productive receiving option; Blair White (70-990-9, 1st team All-Big Ten) is out of eligibility.  In his stead, he leaves B.J. Cunningham (48-641-4), Mark Dell (26-449-1), Keshawn Martin (18-411-5), and former QB Keith Nichol (2-11-0).  In Cunningham, Dell, and Nichol, they have three receivers who are all 6'2" and 200+ lbs. -- they'll be a load for any secondary in the Big Ten.  Cunningham and Dell are battle-tested, too; Cunningham's caught 40 or more passes for 500+ yards in each of the past two seasons, while Dell's gathered in 82 receptions for 1348 receiving yards and six touchdowns over his MSU career.  Nichol obviously can't match them in experience, having primarily played at QB earlier in his career, but the MSU coaches are clearly hoping for him to make a McNutt-esque transition to the WR spot.  Martin is their primary big-play threat: he had four receiving scores of 48 yards or longer and mixed in an 84-yard rushing touchdown for good measure.  If MSU's offensive coaches have any brains, they're going to find as many ways as possible to get the ball in his hands.  Sparty also returns their top two tight ends from a year ago, Charlie Gantt (22-348-2) and Brian Linthicum (20-266-2).

Much like Iowa, while Michigan State returns a considerable amount of talent at the skill positions on offense, they're going to be working in some new faces along the offensive line.  LT D.J. Young (11 starts  in '09) and LG Joel Foreman (23 starts in two years) are the returning starters who should serve as solid anchors for the line.  Among the new faces, C John Stipek (3 starts in '09) and RT Jared McGaha (13 appearances in '09) are the most experienced; RG Chris McDonald saw action in 3 games in '09.  Like Iowa's fresh faces, the newbies on the Spartan line are going to have to gel quickly to allow Cousins & Co. to be effective.

No reason, really, but this post needed more Sparty.