Share All sharing options for: It's Not Plagiarism If You Link To It Is Popping The Pads

It's a welcome sign. Well, except for Josh Koeppel getting blown up on the final drill.

Hello, football: Iowa held their annual Kids Day, which is Iowa's way of throwing parents and other sober people a bone before tailgating season kicks into full effect (sort of). Morehouse has unofficial stats here, and there doesn't seem to be much of a question of who your starters are on offense. Ricky Stanzi put in a decent day, but his skill position guys--playing without the benefit of the red no-contact jersey--put in light days. Derrell Johnson-Koulianos and Marvin McNutt combined for three catches (Paul Chaney, by comparison, had four), and Adam Robinson and Jewel Hampton "didn't see any real action," according to Morehouse.

That stability is a good thing, but it's not precisely the type of returning strength Ken O'Keefe would prefer:

Given his choice between a veteran group of skill players and a veteran-filled offensive line, Iowa offensive coordinator Ken O’Keefe considers it no contest.

"I’d take five guys returning up front every time," O’Keefe said. "That’s the not situation we face right now, but it would be my preference."

So that's a bit disconcerting. While it's not like KOK told the reporter straight up that the offensive line will stink, his point was that the process of their improvement will take time, and probably more time than Iowa's got before kickoff three weeks from now. And yes, pretty much everybody else on offense is back, but... that "everybody else" wasn't enormously productive last season, were they?

All of which is to say, the onus isn't only on the offensive line to improve from 2009.

Hey, speaking of guys who aren't back: As mentioned last night, Brandon Wegher continues to take time away from camp, for reasons that--and yes, we're agreeing 100% with Pat Harty here--frankly don't merit specific discussion here, short of the euphemistic "personal reasons." The bottom line is this: as long as he's eligible and not breaking the law or team rules, he's entitled to privacy if he chooses not to publicly discuss the matter (as is obviously the case here). Kirk Ferentz understands that, the rest of the Hawkeyes understand that, and it's best if we all understand that too.

Fluffers Ahoy! /doesn't look up "fluffer" on Urban Dictionary: Here's a quick roundup of the fluff profiles that typify this time of year. They're not bad, per se, and they're good reading if--like normal Hawkeye fans--you enjoy seeing Iowa's guys get some positive press. It's just, y'know, fluff.

Iowa climbs to 7th in mgoblog's ongoing Big Ten recruiting rankings. The Hawkeyes jumped jNWU after securing a commitment from "four-star" lineman Jordan Walsh. We use the scare quotes not to question Walsh's quality--that's how people end up dead--but just as a reminder that there is no real such thing as a "four star" football player. These rankings are machinations of one firm's evaluation practices, and attaching a star ranking to a college offensive line prospect when he's 16 or 17 is at best wildly premature. Iowa's track record with recruiting (particularly with linemen) and its results would bear that out.

Tim Brewster and Ron Zook are the two funniest coaches in the conference. They're both fighting for their jobs, unfortunately (but not surprisingly), which prompted Dr. Saturday to compare both coaches' chances of sticking around for another year. You will want to click this.

Brian Bosworth is trying his best to fall off the face of the earth, as the Seattle Times' Danny O'Neil finds out. Metaphorically, anyway. He's not actually trying to jump out of orbit, although that would be unquestionably awesome.

And finally, HEY YOU GUYS HAVE YOU SEEN INCEPTION? Here was our favorite part for sure: 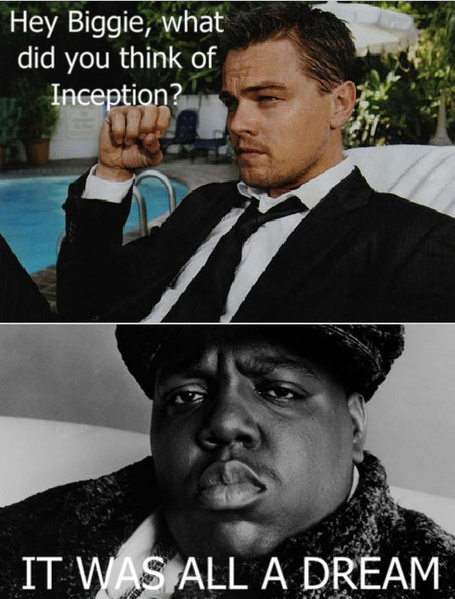