Share All sharing options for: It's Not Plagiarism If You Link To It Is More Than Just One Man

Let's all just keep in mind who the real hero is here--AMERICA: Ricky Stanzi was profiled by Dr. Saturday over at Yahoo!, and Mr. Hinton provided some rather remarkable statistics: mainly that Stanzi is nails in the fourth quarter, and that's really about it: 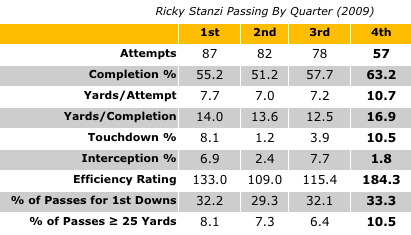 Hinton's source is CFBstats.com, which also helpfully points out that Stanzi is lethal in the red zone, a drive killer in the purple zone, and an outright fireworks show deep in Iowa territory. Frankly, the field-specific stats are more frightening than Stanzi's quarter-by-quarter stats, which are significantly skewed by his ludicrous fourth quarter of Indiana '09 (3-3, 177 yards, 2 TD, 0 INT, 0 Rick-Sixes). The fact that Stanzi only threw 2 TDs from between Iowa's 21-40 yard lines isn't worth mention, but the fact that 7 of his 15 INTs came there (especially on only 82 of his 304 attempts) is scary. At the same time, Stanzi threw precisely zero picks in the red zone all season long. Clearly, he is Stephen Jackson in cleats: he makes love to pressure. We just wish he would, uh, lower his pressure standards a bit when Iowa's in their own territory.

Set your DJK Twitter alerts for early January 2011: As expected, Derrell Johnson-Koulianos confirmed that his Twitter account was silenced by Kirk Ferentz, and that the minute Iowa finishes the 2010-11 season, he'll be Twittering again.

DJK also hails Ferentz and says he wouldn't trade KF for any other coach, which is great news, because it seemed to us that Ferentz was just burying DJK during last week's press conference. After all, not only does DJK come into the season as a co-starter for, what, the fourth straight season?, but name one other Iowa player who wasn't kicked off the team but was the subject of such sardonic criticism from Ferentz during a press conference.

Still, if that's what works, then that's what works, and so be it. Ferentz has certainly had more experience being a father figure to 18-23-year olds than we have (the rebel Togolese army we led during our summer internship in '02 had an age cap of 16, and it was brutally enforced), and if KF has decided that keeping a guillotine over DJK's neck at all times is what it takes, then so be it. It still seems like an unnecessary measure of disrespect to someone in line to rewrite Iowa's receiving record books, but Ferentz is there at practice every day, and we're not. So whatever.

The mainstream media is beginning to notice Alabama's plenty-curious roster-shaving tactics, according to MGoBrian. While Brian takes issue with certain details therein, the notion of accounting for every offered scholarship is starting to gain traction, and that's good news for those who still believe in the NCAA's academic obligations to student-athletes. It might not change much about recruiting as long as athletic scholarships are year-by-year agreements, but it'd be nice to force Saban's staff to have to say outright, "incoming freshman Athlete X's scholarship will come from our non-renewal of Athlete Y's scholarship, because we are sure Athlete Y will never contribute to the football team in a meaningful fashion." At least be honest and upfront, right?

If you're planning to go to the Minnesota game and want to be part of the BHGP collective, e-mail Ross about tickets. It's cool if you check into the comment thread, but for real--if you're serious, e-mail Ross.

(EDIT from Ross: Just to clarify something -- the group ticket deal ($20 tickets if we're in a group of 25+) is ONLY for the jNW game.  Minnesota is, to the best of our knowledge, NOT making group tickets available for that game.  We're strictly doing a tailgate for the Minnesota game.)