About Those Brandon Wegher Rumors

Share All sharing options for: About Those Brandon Wegher Rumors

No, we don't know anything about the Brandon Wegher rumors that have been burning up the Hawkeye-related twitters and message boards and talk radio.  Which seems to put us on equal footing with, oh, pretty much everyone following this "story," give or take a few anonymous "good sources."  We try not to traffic in spurious rumors at BHGP (unless we make themselves, although then they're not really "spurious rumors" so much as TRUE FACTS), so we're not going to go spelunking too deeply into the Speculation Cave about what's going on.  Frankly, it's probably none of our business.  If something of substance comes out from a reputable source (i.e., not some hack Sioux City radio station), we'll pass it along.

That said, if the rumors are true and Wegher won't be around in 2010, that news (coupled with the known absence of Jewel Hampton from the season opener) does mean one thing: a certain poofy-haired assassin is likely to be on the depth chart.  In response, we have no choice but to raise the DAS PAKIBOMB threat level: 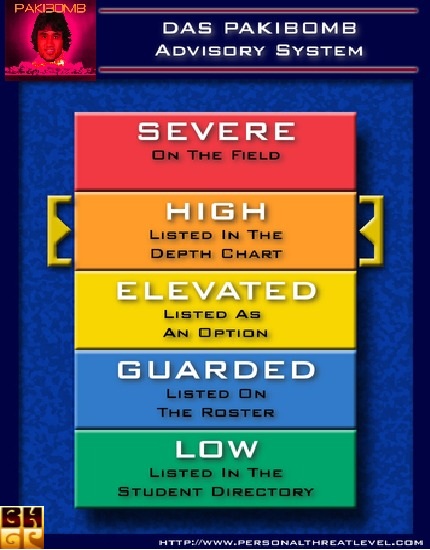 (And just to clarify for our overly literal readers: no, we don't hate Paki.  We think he's a perfectly fine special teamer.  We just don't want to see him at running back.  The horrors of the 2008 Pitt game -- and the 2009 UNI game -- linger on in our brainmeats.)