Where I Come From: My Favorite Hawkeye, Fred Russell

Share All sharing options for: Where I Come From: My Favorite Hawkeye, Fred Russell

This post is sponsored by EA Sports NCAA Football 2011.  Dolla dolla billz y'all. 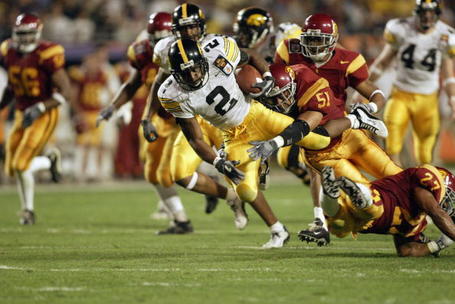 Fred broke the tackle, turned a perfect pirouette, and then threw the ball off Carson Palmer's fat face

Iowa, by its very nature as the prototypical cloud of dust offense, has a long history of halfbacks.  Whether it be the pure production of Ronnie Harmon, the speed of Tavian Banks, the bruising style of Nick Bell, the grit and determination of Ladell Betts, or the ethereal combination of the four that was Shonn Greene, all of them (and many, many others) were great backs who won fans for their success and the way they went about attaining it.  There have been Heisman candidates and Doak Walker winners who have donned the black and gold.  But ask yourself this: Has there ever been an Iowa back who was more fun to watch than Fred Russell?

Once dubbed Mighty Mouse by Florida linebacker Channing Crowder (who, if memory serves me correctly, said he found the Iowa offensive line 'disappointing' after being beaten down by 20 points on New Year's Day in a game where Freddy was named MVP), Russell wasn't much to look at when standing still, all of 5'8" and 190 pounds.  But when he found one of the frequently-appearing holes forming near Robert Gallery, Fred Russell became the magic bullet.  He would blast through the line, stop on a dime, make a left turn to avoid a would-be tackler, throw a quick stiff arm, burst back upfield, juke -- and not in the traditional sense; in the NCAA Football 2001 on the PS2 (cha ching), hit the R1 button and watch the linebacker's jock fall to the ground sense, with a high-kick stutter step he created to slow himself down without losing his leg drive -- and then leave everyone else in the dust.  When Minnesota or Michigan or the mighty Gators would come to, Freddy would have blasted through 15 layers of clothing, 7 layers of skin, 15 inches of tissue, a necktie knot, 3 ribs, a radius bone, and their end zone.

Sure, on plays where that hole never opened, where the linebackers solved the equation before Freddy had a chance to show us there was no spoon, he wasn't great; Fred wasn't built for the grind.  Fred was built for the breakaway, and the mere chance that the breakaway could happen, that he could catch lightning again, is what made watching him so thrilling.  There were, and would be, better halfbacks; Fred finished with 2,760 yards and 17 touchdowns in two years as a part-time starter and one season of mopup duty, a healthy haul when not compared to Tavian Banks and Sedrick Shaw and Shonn Greene.  No, Fred Russel wasn't the best Hawkeye, but he was my favorite Hawkeye.