The off-season is a long and tiresome trudge, so how can we best get through it?  By looking ahead to next year, of course.  So, in the spirit of forward thinking, we present a team-by-team look at Iowa's 2010 football opponents (with looks at Illinois and Purdue thrown in for good measure so our Big Televen brethren don't feel ignored).  Next up: the bye week Illinois Fightin' Illini.  The Zooker rides again! 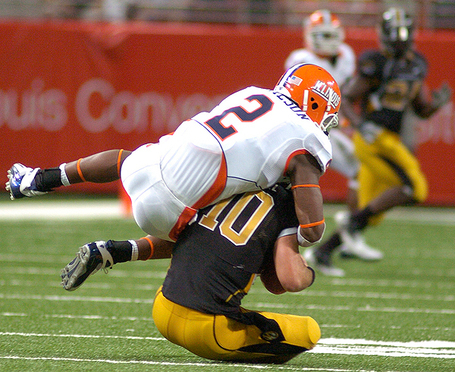 In case you missed it... PART ONE

(Editor's note: This would have been up sooner, but your humble author fell asleep last night while dictating these deranged ramblings about the Illini defense to his typing monkey; such is the interest Illinois football inspires.)

ILLINOIS FIGHTIN' ILLINI (@ our mind's eye; whenever we damn well like)

OK, what should we expect when Illinois doesn't have the ball?  Illinois' anemic offense (they scored fewer than twenty points in seven games in '09 was a major cause of their failure, but the defense didn't help matters by conceding 30+ points in six games (only one of which they still managed to win).  The defense's 30.2 points allowed average was the worst since the truly diabolical Illinois teams of '03 and '05.  That failure led to former Illini defensive coordinators Dan Disch and Curt Mallory getting demoted to position coaches (nothing like getting demoted to inspire better performance) and being replaced by former Kansas State defensive coordinator Vic Koenning.  Of course, we all know it wasn't really the fault of Disch and Mallory that the defense sucked last year; there's only been one good Illini defense in the Zook Era and that was 2007.  And we all know who the lynchpin of that defense was. 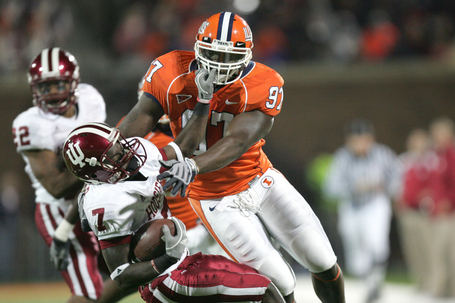 The defensive line was expected to feature two returning starters, DE Clay Nurse and DT Josh Brent, but that was dependent on Nurse healing up from spring shoulder surgery and Brent getting back from a JUCO exile to fix his grades.  Nurse is on pace to make it back for fall, but Brent decided that another tour of duty under the Zooker was too much to bear and entered the NFL's supplemental draft later this month.  Nurse had four sacks against Minnesota alone (which is impressive), but only 5.5 sacks total for the season (which is less impressive), as part of 31 tackles (10.5 TFL).  Corey Liuget is expected to see time at DT as well and Michael Buchanan is tabbed to start in the new "Bandit" spot (think DeMarcus Ware, part rush end, part coverage linebacker).  Liuget had 36 tackles (8.0 TFL), 2.5 sacks, a forced fumble, and a fumble recovery last year.  To date, Buchanan has a QB hurry and a pass break-up... and that's it.  DE Whitney Mercilus (8 tackles, 3.5 TFL, 1 sack), DT Glenn Foster, DT Akeem Spence, DT Wisdom Onyegbule (1 tackle, 0.5 TFL, 0.5 sack), and Nate Palmer (3 tackles) should be in the mix as well, but none has any experience of note.  Outside of Nurse and Liuget, this is one raw defensive line.

Injuries ravaged the Illini linebackers last year, most notably taking out defensive leader Martez Wilson for the season with a neck injury (this after he spent much of the offseason recovering from a stabbing; the streets of Chambana are rough, yo).  Two years ago Wilson had 73 tackles (5.5 TFL), 3 sacks, 2 fumble recoveries, five QB hurries, and 3 pass break-ups; as he goes in 2010, so goes the Illini defense, most likely.  Nate Bussey and Ian Thomas are expected to join him at LB.  Bussey had 43 tackles (0.5 TFL), and 0.5 sacks a year ago, while Thomas had 95 tackles (4.5 TFL), a sack, and 4 pass break-ups.  Aaron Gress (22 tackles), Russell Ellington (42 tackles, 2.5 TFL, 1 INT), and Evan Frierson (19 tackles, 2 TFL) could also be in the mix, but the key to the linebackers will again by Wilson; if he can stay healthy and have a productive season, they might be pretty decent.  If he can't do that, they may have a difficult time improving on last year's miserable production. 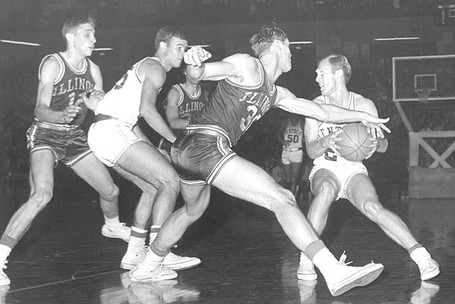 The secondary features one of the few bright spots for the Illini defense, CB Terry Hawthorne, who was tabbed preseason 1st team All-Big Ten by Phil Steele after a true freshman season that saw him start five games and record 30 tackles, 1 INT, and five pass break-ups.  He's a promising talent, but making him preseason 1st-team All-Big Ten may say more about the state of returning cornerbacks in the Big Ten than anything else (or it may just suggest that Steele is a little loopy; no other preseason publication has Hawthorne any better than preseason 3rd-team All-Big Ten).  As a whole, the Illini secondary recorded just five interceptions in '09 (less than Tyler "Motherfucking" Sash had all by his lonesome), which is not good.  The other projected starting CB, Tavon Wilson, had 74 tackles (3.5 TFL), 1 INT, and 7 pass break-ups in 2009.  Both safeties are (relatively) new: SS Travon Bellamy started only three games a year ago (23 tackles, 2 TFL, 1 sack), but he did start 11 games in 2008, notching 53 tackles and three pass break-ups, while FS Supo Sanni (who Iowa once recruited as a wide receiver, if memory serves) picked up 11 tackles in limited action a year ago.  No one else on the depth chart has any significant experience, including JUCO transfer Trulon Henry, who happens to be Rejus Benn's half-brother.  He probably hates Iowa, too.

And just how "special" are their special teams?  It took him a little bit longer than the rest of his teammates, but former Illinois placekicker Matt Eller succumbed to the malaise (Zook Fever?) that has afflicted the Illini over the past two years; after going 15/20 (long of 51) in 2008, he fell to 4/11 and missed two kicks under 29 yards. Production like that forced Zook to make a change and replacement Derek Dimke was an improvement, going 5/5 (long of 48).  Dimke returns in 2010 and could be a decent option... if he can avoid coming down with a crippling case of Zook Fever.  Punter Anthony Santella averaged 41.3 yards per kick (35.9 net); whatever.  He'll likely get plenty of reps in 2010.  More shocking is the fact that the Illini accumulated a grand total of 50 punt return yards.  Fucking yeesh.  Oh, and they lost their best kick return guy (Benn, who averaged 26.5 yards per return on 12 returns in '09), too.  So they've got all that going for 'em.

Alright, brainiac, what's gonna happen?  Nothing.  We don't play Illinois this season.  But if we did play Illinois, Iowa would win.  Not because the match-ups almost exclusively favor Iowa to a tremendous degree; no, because the thought of a Ferentz-led team losing again to a Zook-led team is just too absurd to contemplate. 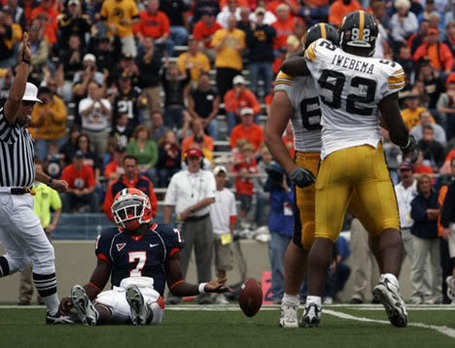 So how's the rest of their season gonna play out?  They open the season with their customary neutral-site clash with Missouri; under Zook that game's turned into an annual loss and given what both teams have returning, there's little reason to predict a different outcome this year.  Illinois follows that game with a pair of home games against directional Illinois schools (Southern and Northern).  On paper, those should be relatively easy wins, but (1) Southern Illinois was one of the better teams in FCS a year ago, (2) Northern Illinois is a popular pick to do well in the MAC (and lately MAC teams always seem to claim at least one Big Ten scalp; this game seems as likely as any), and (3) nothing is easy for the Zooker. 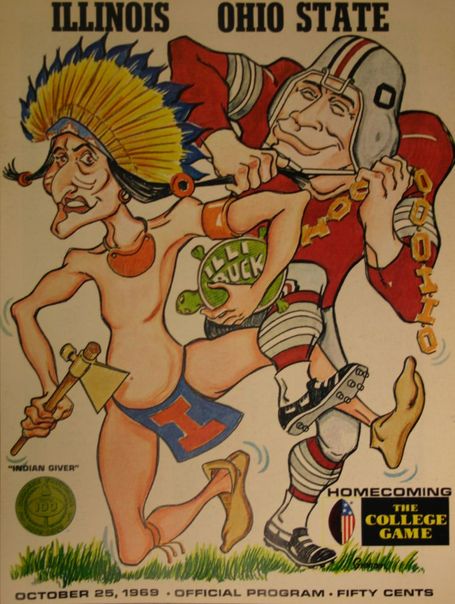 But Illinois had better grab wins where they can because the nasty part of their schedule hits after the directional Illinois two-fer (and a bye week): home against Ohio State and a pair of road dates against Penn State and Michigan State.  Zook scored the signature win of his career against the Buckeyes two years ago; since then, OSU's won two in a row by an average score of 30-10.  As noted last week, the only times Penn State has lost to Illinois since 1960 were the two years that Illinois managed to get to BCS games (2001 and 2007); not even the most fervent Zook lovers are projecting that kind of success this season.  Illinois actually won on their last trip to East Lansing (a 23-20 nailbiter in 2006), but that was their lone win over Sparty since 1992.  Suffice to say, anything better than a 2-4 record at the midpoint of the season would be a surprise.

The back half of the season is friendlier, but it's still difficult to see Illinois scraping together the four wins needed to get their asses to a bowl game (even if it is in Detroit).  Their back six starts with home games against Indiana and Purdue; those are virtually must-win games if Illinois wants to retain any hope of making a bowl game.  On the other hand, Zook's only 2-3 against Indiana at Illinois... which is still better than his mark against Purdue (0-3).  Yes, Ron Zook is only 2-6 against the Big Ten's Indiana contingent.  And no offense to our friendly neighborhood Boilermaker fans, but the last five years of Purdue football haven't exactly been up to the Brees/Orton heydays.  After the Indiana double dip, Illinois heads on the road for three of their final four outings; considering that a 4-4 record heading into that stretch may be one of the best case scenarios, that means they'd need to split those final four games to get to a bowl game. 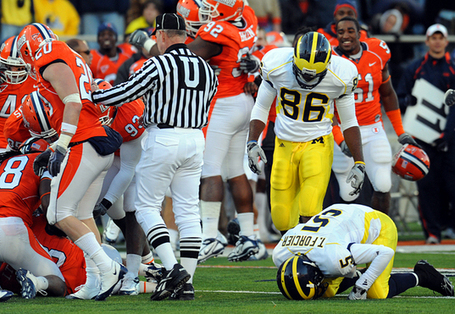 "QBForce.com never said there'd be days like this... >sob<"

The first road game in that stretch is against Michigan, who Illinois has inexplicably managed to stomp a mudhole in the past two seasons, but the idea of a Ron Zook team being able to beat anyone three games in a row seems utterly asinine.  They follow that with a home game against Minnesota (and let us savor that match-up, perhaps the final showdown of two coaching juggernauts) and road games against just Northwestern and Fresno State.  Zook's only 1-5 against jNW and we all remember what happened when Fresno State went to Champbana; now Illinois has to venture into the desert for a late night game with a potential bowl trip on the line.  A far superior Wisconsin team barely eked out a win over Fresno in the Central Valley in 2008 and a more talented Illinois team crapped the bed against Western Michigan in a 2/3 empty Ford Field in 2007 in a must-win game... we're supposed to trust this team, why?  Prognosticators fell for Illinois in 2008, and again in 2009; they were rewarded with a combined record of 8-16.  Zook and Illinois have long since used up any benefit of the doubt they may have earned.