Share All sharing options for: Assume the Position 2010: Cornerback

You know the drill: Every Thursday (or Sunday when my internet goes out) from now until mid-August, BHGP breaks down the depth chart, position by position, from most certain to least certain. 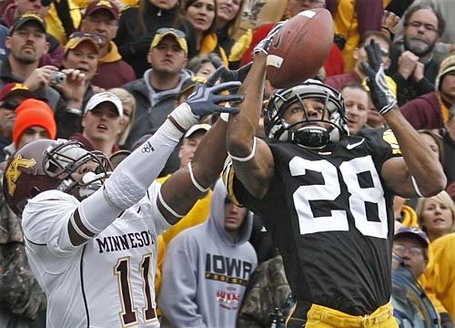 We can say this for Iowa cornerbacks: They've locked down picks 66-67 in the NFL Draft.  In three consecutive drafts, an Iowa corner has been taken with either the 66th or 67th choice in April.  Charles Godfrey (#67, Carolina, 2008) quickly converted to safety and started for the Panthers in his rookie year.  The surprising Bradley Fletcher (#66, Rams, 2009) played sparingly.  We're still waiting to see what Amari Spievey (#66, Lions, 2010) will do.  But, barring a breakthrough worthy of an early exit, that streak is going to take a year off.

Another corner leaves, another corner moves to the top.  On first blush, Prater might be some cause for concern: Undersized, unheralded out of high school, missed time with two injuries (and one two-game suspension) in his only season as a starter.  There are red flags here.  And yet, despite those things, Prater has us feeling confident in his ability to pick up where his predecessors left off.

Prater was the target of opposing offenses wary of Spievey early last season, particularly by Penn State and Wisconsin.  The results were disastrous for the opposition: A Prater interception stopped a third-quarter PSU drive at the Iowa 24, and two Prater breakups stalled a Wisconsin drive at the Iowa 21, leading to a missed field goal that would have put the Badgers ahead late in the third quarter.  Against Indiana and Northwestern, he tied his career high for tackles with seven, but all came on the sort of underneath routes where Prater is taught to contain big yardage.  When  Minnesota and Georgia Tech attacked the sidelines deep, Prater was there (right up until he was injured in the Orange Bowl).

Therein lies his strength: Shaun Prater is an excellent assignment cornerback.  In Iowa's cover 2, he is to play the zone on the flanks, provide run/short pass support, and maintain deep sideline coverage with help over the top from the safeties.  He's proven more than capable of filling those roles, despite his size and limited experience.  It's why he's the next CB1.

The Next Man In

Micah Hyde is supposed to need more time, more experience, more strength, more size, more everything before he gets to this point.  A true sophomore, Hyde was about as unheralded a recruit as you'll see: A two-star athlete to Rivals and Scout who didn't even play cornerback in high school (he was a two-way quarterback/safety).  After getting offers from most of the MAC (Ohio, Toledo, Ball State, Miami (OH), etc.), Iowa threw a last-second scholarship at him.  Hyde accepted immediately.  He entered Iowa last year skinny, unheralded, and without a position; he left August camp, in the wake of Jordan Bernstine's ACL tear broken ankle, as one of just three incoming freshmen without a redshirt.  He played in every game, mostly on special teams and in place of the oft-injured Prater.  He was the first one off the bench when Prater went down early in the Orange Bowl, and probably would have been picked on more if Paul Johnson wasn't so stubborn (or stupid).

He should be in a dogfight with the fourth-year junior Bernstine for the second cornerback spot, but if spring was any indication, the fight was over before it even began.  Hyde exited spring with the starting position firmly in hand.  It remains to be seen what Hyde will do when he becomes the target but, if the Traveling Parkers are more comfortable with him than with Bernstine, who am I to judge?  So much for that extra time.

It's not supposed to be this way for JB4.  As he entered his senior year at Des Moines Lincoln, Bernstine was arguably the most-hyped in-state recruit since Blake Larsen topped the Rivals 100 in 2001.  He received four stars from all the services (and was named the #3 corner in the nation by Rivals), received offers from everyone from Nebraska to Pitt to UCLA, even received a scholarship offer for his friend and high school teammate Adam Robinson the next year.  All this came despite the fact that he'd never played cornerback (though his numbers as a high school safety were absurd).  Since the day he hit campus, he's been pegged for the starting cornerback spot. In 2007, he was behind two seniors.  In 2008, he was beaten out by the upperclassman Fletcher and the admittedly excellent Spievey.  In 2009, Bernstine injured his knee ankle and redshirted, but all indications at the time were that Prater had passed him regardless.  Now it's Hyde, and it's bordering on absurd.  It's not just that this is supposed to be Bernstine's time to shine.  It's that Bernstine's time to shine was supposed to start two years ago.

From the opposite end of the recruiting spectrum comes Greg Castillo, a New Jersey-by-way-of-Texas corner who was committed to FCS powerhouse Villanova prior to receiving a late Iowa offer in 2008.  At the time, he was 158 pounds and worthy of little more than passing interest from the recruitniks (2* Rivals, unrated by Scout, and 72/100 from ESPN).  Castillo was a classic Iowa project, and had a productive redshirt season, adding 20 pounds and showing improved speed.  It still wasn't good enough to make him a starter as a redshirt freshman: Castillo filled in as co-starter in week one because of Prater's suspension, and the results were ugly.  He exits spring practice listed behind Prater, and is still probably a year away from becoming a legitimate option as a full-time contributor.  No harm in that.

Prater's classmate also played as a true freshman in 2008; he hasn't fared as well in the intervening years.  Lowe shared the starting corner spot in week one last year with the aforementioned Castillo and picked up a start the next two weeks against Iowa State and Arizona.  But Prater made his revelatory return early in week three and Lowe began his slide down the depth chart.  After spring practice, he was nowhere to be found, buried behind Castillo.  It's not that there isn't time to turn this around, but given his lackluster play early last season and his apparently mediocre spring, he'll have to find something and find it quickly.