The off-season is a long and tiresome trudge, so how can we best get through it?  By looking ahead to next year, of course.  So, in the spirit of forward thinking, we present a team-by-team look at Iowa's 2010 football opponents (with looks at Illinois and Purdue thrown in for good measure so our Big Televen brethren don't feel ignored).  Next up: Meeeeeechigan.

Where the devil do they play?  The infamous Big House, of course, better known as the world's quietest collection of 100,000 football fans.

What did they do last year?  If football seasons ended when the leaves turned color and September transitioned into October, Michigan would have had a mighty fine season.  Alas, football seasons are a three-month (at least) affair and the final two months of the 2009 campaign were dismal ones indeed for the Wolverines.  After opening up with a tidy 31-7 win over Western Michigan (Michigan's first season opening triumph since 2006 after disastrous debuts against Appalachian State and Utah in 2007 and 2008), the hype on the "Michigan's back!" meme hit critical mass after a thrilling come-from-behind win against Notre Dame.  Two months and multiple losses for both teams later, that game was exposed as not a classic tussle between two resurgent power programs, but a simple thriller between a pair of mediocre squads.  Michigan followed that up with a massacre of Eastern Michigan, cementing their superiority over the directional Michigan schools.  But that was probably the peak of the Michigan season.

The first signs that perhaps the early buzz on Michigan was premature came when they struggled badly to put away Indiana and needed a controversial interception call to clinch the win.  (Bill Lynch's gum still thinks that call was bullshit, man.)  Still, controversy be damned: it was a win, and a win over an FBS (BCS, no less) team.  Little did Michigan fans know they should have savored that win... because it would be their final win over a team with a pulse (sorry, Delaware State) for the rest of the season.  Tate Forcier followed up his late game heroics against Notre Dame with a late tying drive against Michigan State... only to throw a terrible interception in OT to help clinch the loss.  Forcier's next feat was getting blasted into a new state of consciousness by Adrian Clayborn; despite a generous gift by Ricky Stanzi and an unusually poor day of run-stuffing by the Iowa defense, Michigan came up short for the second straight week.  The losing ended briefly as the Wolverines ran roughshod over puny Delaware State, but regular business was resumed the following week as Penn State thrashed them.  Then the season truly bottomed out when Ron Zook and Juice Williams beat Illinois for the second straight year.  Bowl hopes went on life support after a mildly surprising loss to Purdue (by that point, Michigan losses had lost all shock value, although losing to Purdue in Ann Arbor for the first time since 1966 is at least an eyebrow-raiser) before being decisively snuffed out by Wisconsin and Ohio State in the final two games of the season.  And thus ended a second straight losing season for the LOLverines, the first time that had happened since 1963. 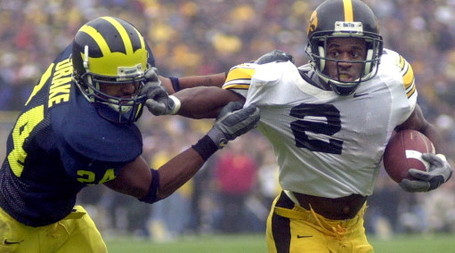 Hail to the Fred, bitches.

So do they have, like, history with Iowa?  Indeed; these two schools have been mixing it up since 1900; unfortunately, most of those clashes have ended in heartache (or nausea, if that's your preferred sensation for being on the wrong end of an ass-beating) for Iowa.  How bad is the damage?  Well, Michigan leads the series 40-11-4 and they once beat Iowa 107-0 (in 1902).  So yeah: fuck Michigan.  That said, since Ferentz's arrival the series has been considerably more competitive.  Michigan holds only a 4-3 edge in the seven games the two schools have played since 1999 and the largest margin of defeat in the series is 25 points, from Iowa's glorious 34-9 Big House beatdown in 2002.  The only other double-digit margins of defeat in the seven game sample are a 13-point Iowa defeat in 2004 and a closer-than-it-looked 14-point Iowa loss in 2006.  The other four games were decided by six points or less, including a pair of Iowa triumphs (2003, 2009) and a pair of gut-wrenching losses (the Fuck You, Marquis Walker Game in 2001 and the Fuck You, Refs Game in 2005).  So while the overall history between Iowa and Michigan is brutally slanted in favor of the maize and blue, the recent history certainly isn't that terrible. 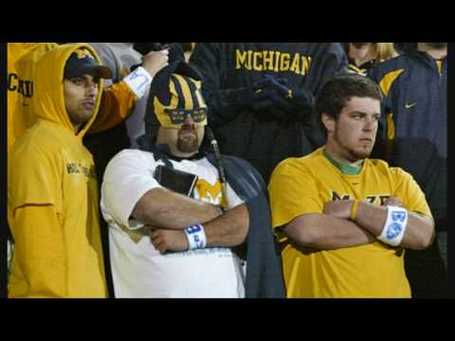 What's the one thing you should know about Michigan?  Besides the fact that God made them jerkoffs?  Nothing, really.  That about covers it.

How many of these fools were around a year ago?  Seven dudes on offense, including a pair of receivers and three-fifths of the offensive line and eight on defense, including a slew of guys along the defensive front.

What should we expect when Michigan has the ball?  Rich Rodriguez was brought to Michigan with a mandate to update Michigan's offense and bring it into the 21st century.  Or at least catch them up to those newfangled spread offenses at Indiana, Purdue, and just Northwestern.  Still, regardless of the wisdom (or lack thereof) involved in changing a century of offensive tradition, what's done is done and the days of statuesque drop-back quarterbacks rifling passes to enormous, glue-handed receivers or handing off to huge, ground-churning running backs are done; bring on the speedy midgets. 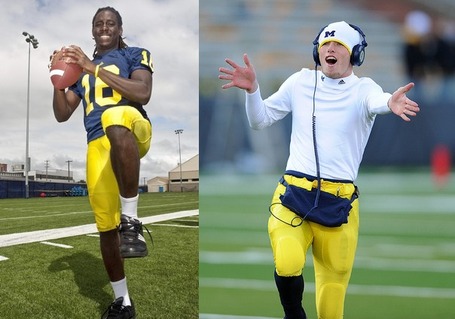 One of these men will likely be leading the Michigan offense in 2010.  No, seriously.

At the forefront of the speedy midget movement are Michigan's two main returning quarterbacks, "Little Man" Tate Forcier and Denard Robinson.  Forcier was the chosen one for most of the 2009 season, going 165/281 for 2050 passing yards, 13 touchdowns, and 10 interceptions with 240 rushing yards (including sack yards) and three touchdowns on the ground.  He peaked early, though, while Michigan was playing the minnows of its schedule and before he began to break down with various injuries; 9 of his 13 touchdown passes came in Michigan's first five games, while seven of his ten interceptions came in their final seven games.  Robinson saw far less action, going just 14/30 for 188 passing yards, two touchdowns, and four interceptions, including sailing the game-clincher to EPIC GREENWOOD a year ago in Iowa City.  Robinson was rather more effective on the ground, racking up 351 yards and five touchdowns on 51 carries.  He was the talk of the Michigan corner of Blogfrica after Big Blue's spring game, with reports of much-improved passing skills.  Considering how dreadful the Michigan defense has looked, though, we remain unconvinced until he proves himself as a passer against a non-shitty defense.  The real future of the Michigan QB position may be much-hyped recruit Devin Gardner; whether he sees time this fall may depend on (a) how much of a prodigy he proves to be and (b) how desperate Rodriguez gets.

Michigan ran the hell out of the ball in 2009, to the tune of 494 carries (though that does include a few sacks and a fake punt, too), with no fewer than six players getting 40 or more carries.  The bad news is that Michigan's two most productive running backs from a year ago, Brandon Minor (96-502-8) and Carlos Brown (81-480-4) are both gone baby gone.  But their departure does clear the way for the continuing evolution of the Michigan offense, with the bigger, bruisier Minor and Brown giving way to a fleet of smaller, quicker backs, including Vincent Smith (48-276-1), Michael Shaw (42-185-2), and fabulously named redshirt freshman Fitzgerald Touissant.  Of course, they'll need a whole stable of running backs if they want to survive an entire punishing season in the Big Ten.  Just ask Forcier what it's like to endure an entire season of Big Ten beatings; he visibly broke down as the season progressed and the hits mounted. 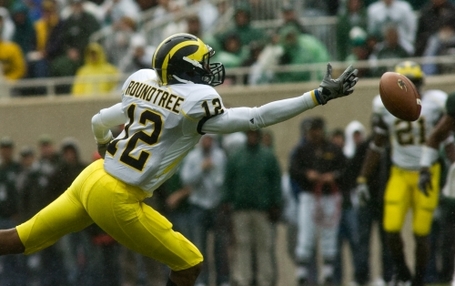 An entire season in one picture?  More or less.

From the optimist's perspective, it's probably a good thing that Michigan returns four of their top five receivers and their leading tight end from a year ago.  On the other hand, a pessimist might point out that only one of those guys caught more than 30 passes or had more than 300 yards receiving (Roy Roundtree had 34 receptions for 434 yards and three touchdowns).  Granted, Michigan did an admirable job of spreading the ball around -- ten players caught at least ten passes -- but none of them stood out as a top-line target.  But they were young, so it's not out of the question that between Roundtree, Martavious Odoms (22-272-1), Junior Hemingway (16-268-2), Darryl Stonum (13-199-1), and Kevin Koger (16-220-2), someone will emerge as a serious threat.

The other positional strength of the Michigan offense figures to be the offensive line, where three starters return, including C David Molk and LG Stephen Schilling, the only two offensive players from Michigan to place on one of Phil Steele's preseason All-Big Ten teams (and take a moment to think about how crazy that sounds).  Molk made third team, while Schilling was tabbed to the second team.  Mark Huyge (an apt name for an offensive lineman if ever there was one) is the other returning starter on the line; he started five games at RG and four games at RT and is currently projected to start at RT.  They're joined by some mostly raw but highly touted newcomers in RG Patrick Omameh (started three games in '09) and redshirt freshman LT Taylor Lewan.  There's definite danger in making a rsFR your starting LT, although it can pay off if you're lucky enough to stumble into a situation where a player can do well from the start and have time and opportunity to develop even more (see: Riley Reiff).  The '09 Michigan offensive line was a step in the right direction from the turnstile and banana peel-laden squad that paved the way for one of the most moribund offenses in recent Michigan history (291 ypg, 20.3 ppg) in 2008, but they may need to be even better this year in order to open holes for the young, speedy tailbacks and to keep whoever winds up being the quarterback from having his internal organs liquefied by excessive exposure to Big Ten defensive ends.